President Sarkissian spoke on the phone with the Director-General of the WHO Dr. Tedros Adhanom Ghebreyesus: it is necessary to enhance as soon as possible the efficiency of the measures aimed at taking under control the spread of the new coronavirus 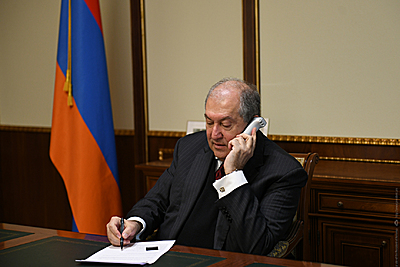 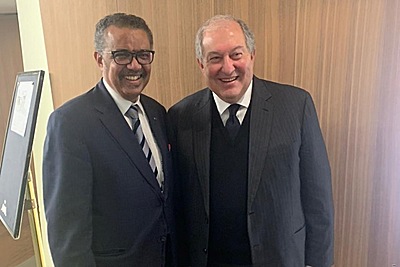 Late at night on March 13 President Armen Sarkissian spoke on the phone with the Director-General of the World Health Organization Dr. Tedros Adhanom Ghebreyesus.

After their meeting last February in Munich, the President of Armenia and Director-General of WHO spoke once again about the situation related to the spread in the world, including in Armenia, of the new coronavirus and tendencies, possible consequnces as well as about the measures to thwart the infection and treatement of the disease.

President Sarkissian expressed gratitude for the technical and expert assistance provided to Armenia by the Organization which was noted during the Munich meeting.

The fact that the WHO has declared pandemic speaks of the gravity of the situation and makes even more important in this situation the necessity to join international and national efforts, mutual and agreed steps taken by the states, particularly border control, public mobility and mutual assistance which is especially singicant in case of Armenia. In this context, the Director-General of WHO underscored that the Organization would hold the situation in Armenia in the center of its attention.

The President of Armenia noted that he agrees with the approach of the Director-General with regard to the preventive and preemptive measures and national strategies to be developed by the states and informed that an interagency commission has been created in Armenia to prevent the spread of the virus. He also said that directions offered by the WHO for the development of national strategies and active involvement of the Organization’s experts would be extremely valuable. President Sarkissian stressed the importance of the advisory activities of the Organization’s experts who have already arrived to Armenia and stressed the importance of their continuos presence as well as the involvement of additional experts and specialists.

President Armen Sarkissian underlined the importance of enhancing as soon as possible the efficiency of the measures aimed at taking under control the spread of the new coronavirus all over the world.

The parties concurred that towards this end the authorities and public at large should understand the whole seriousness of the situation, be self-organized, with high sense of responsibility and discipline. The President of Armenia and Director-General of WHO spoke about thwarting the disease through innovation and education, in particular related to diagnosing the new cases of coronavirus, vaccination and research aimed at its treatment.

Dr. Tedros Adhanom Ghebreyesus accepted gladly the inivitation of the President to visit Armenia in the near future.

President Sarkissian suggested to organize a panel in the framework of the Director-General’s participation at the Armenian Summit of Minds to be held in Armenia on June 6-8 dedicated to the prevention and innovative treatment of the new coronavirus and to the vital issues which countries face during pandemics.

The President of Armenia and Director-General of the World Health Organization agreed to exchange regularly information on the existing situation.


Before this phone call, President Sarkissian spoke with the RA Minister of Health Arsen Torossian who presented the necessary information pertinent to the situation with the coronavirus in Armenia.

After the phone call, President Sarkissian informed the Minister on the agreements reached with the Director-General of WHO and his recommendations.