President Sarkissian introduced his idea on creating a Hay Park: Hay Park – a pan-national park of solidarity and remembrance on the territory of Tsitsernakaberd 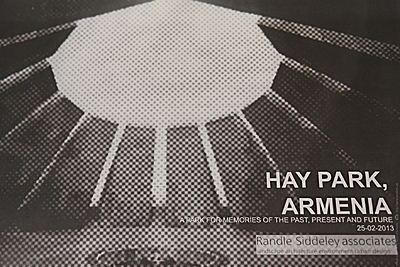 During his interview on the Sunday’s Analysis program of Radio Azatutyun, President Armen Sarkissian spoke of his idea and initiative to establish a “Hay Park” on the territory of Tsitsernakaberd.

The President noted that the world should reassess itself after the pandemic of the coronavirus is over. He said that actually “after” starts today. “Already today we need to think how we are going to live after the coronavirus. In case of Armenia, we can start, for instance, from the most basic thing – public health. Today, I am able to see from the balcony of my house even the most remote parts of the city. Mount Ararat appears much more clear, too, which was impossible in the past. It means that currently the air in our city is two to three times cleaner than before the coronavirus. Let’s think of having clean air all the time.”

The President said that parks and gardens of Yerevan are its “lungs” and to be able to provide a healthy lifestyle for our public, we need to have parks, “healthy public lungs.”
In this contexts, President Sarkissian presented his idea on creating a “Hay Park” on the territory of Tsitsernakaberd. “Very soon we will be commemorating the memory of the victims of the Armenian Genocide to remind the world that denial of the Genocide or disregard for the history lessons is perilous for the entire human kind,” the President said. “With this regard, I would like to make a proposal, the idea I mused over for years. If you take a look from the Eghern memorial down to the Hrazdan stadium, you will see a vast territory, which makes, if I am not mistaken, 103 hectares. It is uncultivated land, while our city needs a large park. I propose to establish there a pan-national park which will begin near the Eghern memorial and extend for 103 hectares.”

Elaborating on the details of the park creation, the President said, “The concept is the following: the first sector of the park will comprise segments representing regions of our historical homeland – Van, Erzerum, etc. The second sector will represent Armenian communities all over the world – Marseille, New York, Moscow, Novosibirsk, and so on. And the third sector will be dedicated to the current regions of our Fatherland, towns and structures, for instance, the University of Gyumri or Yerevan State University. This division is symbolic; the entire territory is split into different parts and trees will be planted all around. It will be nice if the total number of the trees comes close to 1,5 million – one for each victim. This park will relate about our historic losses, and, at the same time, will tell about the contemporary Armenian world, Armenian statehood, Armenia and Artsakh. By dividing the park into sectors and assigning names to each sector, we can also encourage our compatriots, let’s say, those descending from Van, to adopt the part of the Park named Van and take good care of it. It will become a pan-national park, Armenian park, Hay Park.”

President Armen Sarkissian stressed the importance of preserving the park as a park, not turning it into a restaurant area. He noted that he once discussed this idea with one of Europe’s most well-known landscape designer companies and the company even put the idea on paper.

“I sent letters to the government, prime minister, and mayor and suggested they discuss this proposal,” Armen Sarkissian said. “First, this means to remember 105 years later our huge losses - human, historical, and cultural. On the other hand, working all together, in solidarity we will create a park which will carry our name – the Hay Park. We will show the world that we’ve learned the lessons of this calamity and will give Yerevan the gift of “new lungs” so that the residents of Yerevan live in better conditions - 1,5 million trees will make the air in our city much cleaner. I believe, the same could be done in Gyumri and other towns which also need parks.”

According to the President, the creation of the Hay Park is a pan-national project. “If the government and City Council approve this program, I will take it as a presidential initiative and will personally engage in the fundraising and organizational matters because I think that this will be a very important investment in many ways. It will promote national unity, manifest our special attitude toward our history, will promote public health, and everything else.”