President Armen Sarkissian visited the Erablur military pantheon: We are a truly victorious nation – we won in the WWII and in the fight for freedom 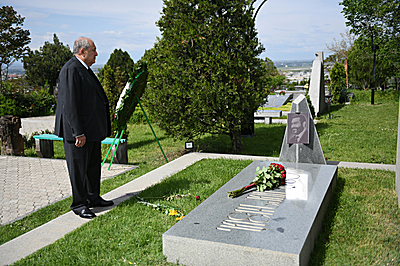 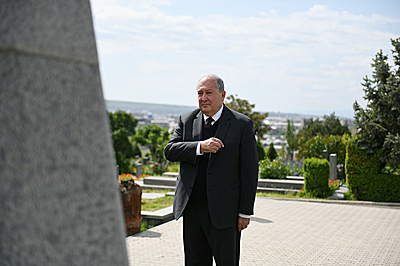 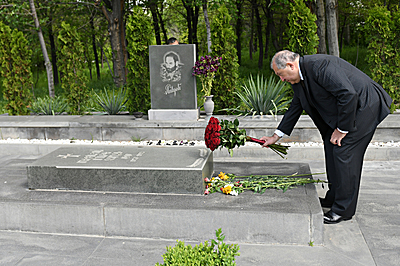 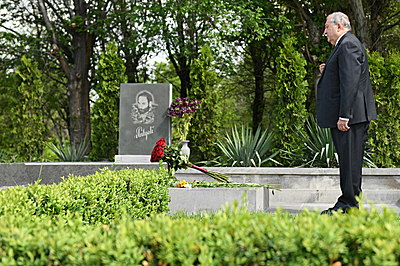 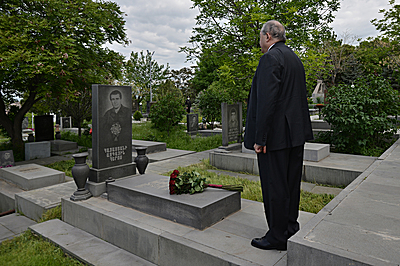 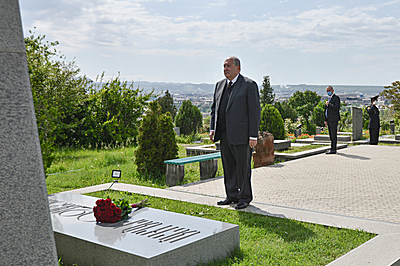 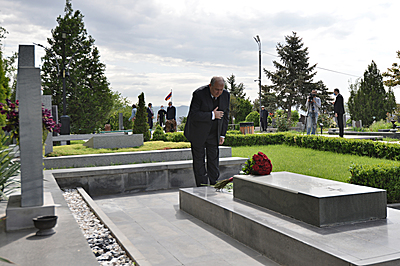 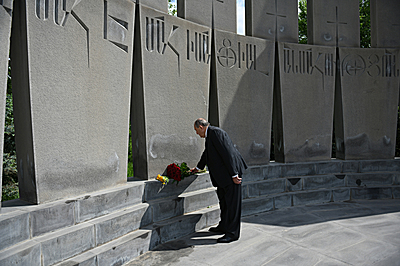 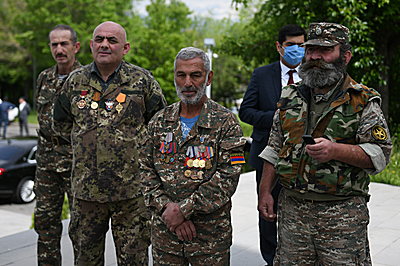 On the occasion of the 28th anniversary of the liberation of Shushi, President Armen Sarkissian visited today the Erablur military pantheon.

President Sarkissian laid flowers on the tomb on the National Hero of the Republic of Armenia, National Hero of Artsakh, first Minister of Defense of Armenia Vazgen Sargsyan, heroes of Artsakh’s fight for freedom Monte Melkonian, Jivan Abrahamian, as well as on the tomb of Zoravar Andranik, and the memorial wall of the sons of our nation who gave their lives for freedom and independence of our Fatherland.
The President of Armenia honored with a moment of silence the undying memory of the devotees who sacrificed their lives for the Fatherland.

Responding to the questions of the journalists, President Sarkissian on the occasion of the holiday sent his congratulations to all in Armenia, Artsakh, and Spyurk. “I came today to visit the heroes of our liberation struggle. It is deeply symbolic. Isn’t it stunning? Twenty-eight years ago our nation achieved a great victory, one of the most significant ones in our liberation war and liberated Shushi. The liberation of Shushi, to draw a comparison with the WWII, was something like Stalingrad or Kursk battles. It reveresed the logic of the war and paved the way for victory.”

Speaking of the 75th anniversary of the victory in the Great Patriotic War, President Sarkissian reminded that 300,000 Armenians gave their lives for that victory.
“Unfortunately, these 300,000 today have no graves in Armenia but the memories about them are with us. Out of 600,000 Armenians, who fought at every front, 300,000 – a half of them, gave their lives. Our nation gave more than one hundred Heroes of the USSR, five marshals… It was not a proportionate number – a small nation, five marshals, more than 60 generals,” the President noted.

“Obviously, this nation is indestructible because this nation was a frontrunner in the fight against fascism, and quite naturally this nation cannot be defeated in the liberation war. Not a single name of these 300,000, who gave their lives 75 years ago, is forgotten. Throughout the liberation war and especially today, organizers of liberation of Shushi, and fallen heroes, and those who live today, regardless of where they are, what position they hold, what they do, with their families or left Shushi – they all are heroes. Such heroism is ageless, eternal. We are a truly victorious nation – we won in the WWII and in the fight for freedom.