As I see it, in the future Armenia Yerevan should have smaller population, at least two times smaller, than Gyumri or Vanadzor: President Armen Sarkissian stressed the importance of decentralized healthcare, spoke of demographic and food security issues 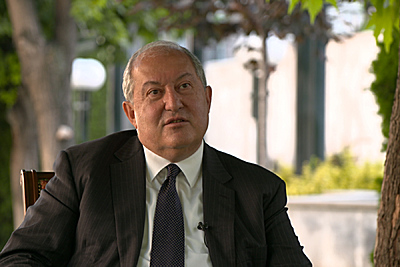 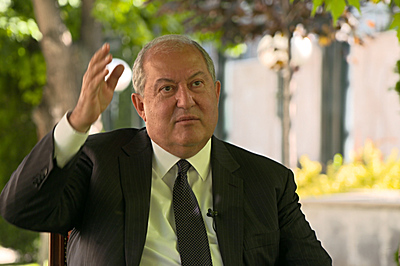 “I believe that coronavirus is not the cause but rather a result of today’s problems and difficulties,” President Armen Sarkissian noted in the interview with the Erkri Harc@ program of the Yerkir Media TV channel, “ because the real cause is the world which is changing. The world has been changing for a long time, for years. Armenia has changed, too.”

The President said that conditioned by the current pandemic and situation with the healthcare system, centralized healthcare is not a solution for Armenia. “We have a country in which half of the population lives in one city,” the President said. “We will be successful, if we are able to distribute the best centers all over the territory of the Republic. Healthcare must be up-to-date, distributed in space. With the best centers located in Yerevan, Gyumri and Vanadzor, we need to create healthcare systems in rural areas which will provide regional, local solutions.”

According to the President of Armenia, after coronavirus we need to understand that healthcare and health on the global scale and also in Armenia will become a priority. “From now on, it will be impossible for a state spend no money on biology studies or healthcare systems,” Armen Sarkissian said. “Armenia too, should have its say, and talking to the partners, we have to bring know-how to Armenia, while we, by the way, have high-class specialists here.” As an example, the President noted that recently nearly 30 ventilation devices were renovated by our specialists. “We have both scientific and technological capabilities,” President Sarkissian said. “We continue discussions with Germany on establishing joint production of artificial ventilation devices. There are two companies – Siemens and Bosch, we are working with.”

Coming back to the notion that coronavirus came to prove that the world has changed, the President said that he has again appealed to the United Nations Conference on Trade and Development (UNCTAD) and proposed that the Presidential Administration works with them to review or supplement the previously prepared report, taking as a starting point proposals made after the coronavirus pandemic. One of such proposals is to speed up the introduction of e-governance systems which are related to healthcare and other areas because this has become a necessity. Cooperation with the UNCTAD has a prehistory. “There is this Panel of Eminent Persons, which comprises presidents and prime ministers of different states, who should make proposals on how the Organization should be transformed in the future. I was asked to preside over that Panel,” President Sarkissian told. “Since I agreed, I asked to prepare a free research on Armenia, to develop a program for foreign investors. The program was developed and presented to the government of Armenia.”

As for e-governance, the President of Armenia believes it is a necessity. “Electronic governance is necessary in state service and in the educational system. If we want to give a high-class education to the kids in border areas, the e-education is the best way to do it. The kids there will listen to the best math teachers in Armenia and will do their homework.”

The President of Armenia says that coronavirus was a calamity, and each of us, the world as a whole and individual states are going through that calamity. “One of the conclusions to be drawn from this test is the fact that Armenia has a problem and it must be solved. That problem is food security,” the President noted. “Speaking of food security, we should first of all remember that we have two gates – one on the South - Iran, the other is Georgia. We have huge agricultural potential which is not being used.” It’s not about how much we have, but rather how much we produce. “For instance, except for Ararat valley, in mountainous parts we don’t do intensive agriculture,” the President said. “It means that potential is much greater then we are producing now. Another example: I recently met with the newly-elected President of Artsakh. We spoke about sheep breading in Artsakh. Today, there are 65-70 thousand sheep in Artsakh. Through investments and encouragement – through taxation, financing, and banking, it is possible in principle, in a number of years to bring that number to half a million or 600,000. It means that Artsakh will be able to export to Armenia, Armenia will be able to export to neighboring countries, and beyond.”

Linking food security with demography, President Sarkissian once again explains it bringing Artsakh as an example: “Today, the population of Artsakh is approximately 150,000 people. Imagine, we had adopted a precise plan after the war and supported people in establishing their homes in Artsakh. Had the population been 200 or 400 thousand, just think what a huge contribution those 400 thousand could have made to the economy of Artsakh, economy of Armenia, and, at the same time, into food security.”

Coming back to Yerevan in the context of this topic, President Sarkissian said that the capital is not able to satisfy everyone’s needs. “If we live in a multistory building, health-wise it is much more difficult for a family to get self-isolated compared to those who live outside Yerevan, in a cottage or a house with a small garden,” President said. “Kids would be able to go outside and the coronavirus period could have been passed in a much safer environment. One can travel from Yerevan to Byurakan by car in 25 minutes, Tsakhkadzor and Hrazdan in 40 minutes, while in megapolises around the world people waste one, two, three hours to commute. Armenia is a country where people for no apparent reasons prefer to live in the center. In the 21st century we must set a goal of becoming a modern country. I have been talking about this since day one of my presidency. If, for instance, we are able to solve the infrastructure problem, if we build a road from Yerevan to Gyumri as soon as we can, employing also potential of those, who usually spend this season in Russia, we would first create jobs, and second, would promote stability of the families. Thus, as I see it, in the future Armenia Yerevan should have a population, which will be smaller, at least two times smaller, than the population of Gyumri or Vanadzor. And we will learn to live in more natural conditions.”