President Armen Sarkissian believes that changes in the educational system must become a lesson drawn from the pandemic: World has changed, and educational methods must change too 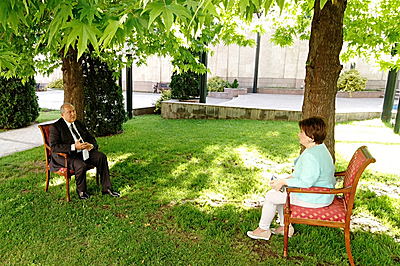 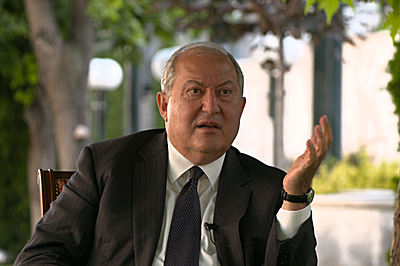 “If we want to transform industry, agriculture, social system, we need first of all to think where to start. We need to start from the educational system,” President Armen Sarkissian said in an exclusive interview with the Erkri Harc@ program of the Yerkir Media TV station. He spoke of the role of education in the rapidly changing world full of challenges and viewed the changes in the educational system a lesson drawn from the pandemic.

“The world has changed, and educational methods must change, too, from electronic methods up to engaging people directly in practical work,” the President underscored. “If I dream that in a number of years the Republic of Armenia becomes a leading country of the world in the area of artificial intelligence, I have some problems here. We cannot develop startups in Armenia in the lack of corresponding environment and support. Startups in Armenia are supported but it is not enough. For startups to become companies venture capital is a must and an environment, i.e. presence of major companies which is not the case in Armenia.”

Speaking about ATOM presidential initiative, Armen Sarkissian noted that the objective is to create joint ventures in Armenia. “The goal is to bring to Armenia world’s major companies, universities and create an environment in which we will not reinvent the wheel but work with the greatest and learn from them. The number of companies is close to 18, not to mention other countries and universities from the Russian Federation, for instance, and centers to which I have spoken preliminary and hope that with them and some other countries the agreement will be reached,” President clarifies his idea. “We aspire to create a venue where people are engaged in mathematical modeling or development of high class IT because we cannot be mediocre. We are small but have the ability to be on the top. For that very reason, we need to interact with the best.”

The President notes that memorandums have been signed with a number of companies, with some agreements have been reached, discussions are underway with the others. “All that companies are interested first of all in the educational system. If Armenia aspires to have a high-class IT area or artificial intelligence, biology, any other area, I will support it with both hands. Our educational system must have the corresponding level and each year produce high-quality specialists who are ready for work. Otherwise, each company will be recruiting the second-year students and educate them, they will reach a certain point when they are not able to grow anymore,” the President says. When during my last year’s visit to the Silicon Valley I spoke with American companies about famous Armenian firms, who are largely represented in our country, they all expressed concern that it would not be possible to get enough young specialists to make them the future of the company which means they would not be able to move forward. It means that education is our number one problem not only for the IT area but in all areas.”

During the interview, the President spoke also about his idea of creating a Hay Park on the territory of the Armenian Genocide Memorial. He noted that it has a number of objectives. “First, we have a very beautiful memorial, on the top of the hill, looking at Mount Ararat which at some point is not visible any more. The part of it, which is looking downward, has no park but bushes, a forest which once was planted with trees but did not become a park. The Park will have several layers: one will be our land in Western Armenia, the other – our world-wide Diaspora centers, such as Moscow, Nor Nakhijevan, Marseille, Los Angeles, Beirut, and others, and the third layer is us, those who live here, YSU, Gyumri, Artsakh. The YSU students, residents of Gyumri and Artsakh will come here to take care of their trees. It is about doing something together which is very important today. It is important for all, including our society. It is also about tolerance, the ability to talk and listen.” The President stressed also the unifying notion of the idea. “When we speak of Eghern, a national park, whatever political ideas or aspirations you have become secondary, even your spiritual values become secondary because we all have to unite around the idea that we are creating something together which is not only about our history and memory, which is not only a claim in itself, opportunity to speak loudly of the event which took place, but is also aimed into future.”

According to the President, 105 years after Eghern, the time has come to remember that a plan to eliminate our nation existed which failed. “There were people who struggled, our surviving compatriots went through hell – no fatherland, no passports, no money, family members lost but they endured in different countries of the world – from Syria to the United States and Russia. It was in a sense a victory of the Armenian soul and spirit.” He stressed as important also the ecological component of the Hay Park initiative and noted that the capital needs also a park, a green zone. “Coronavirus proved that parks in Yerevan, where we can stroll, are not existent or scarce. We need a big park but also should take good care of the forest and bushes.

I was working on this project back in 2012, hired one of Europe’s most famous landscape designers, Lord Randle Siddeley,” President of Armenia tells. “The idea is the following: each trees and each bush will be registered. With His Holiness Catholicos we did the same with regard to the city park of Etchmiadzin located in the vicinity of the Holy See. The Patriarchate assumed responsibility for the park, and I personally pledged to finance the reconstruction of the park. Do you know what we did first? We created the map of the park and registered each shrub and each tree, along with their names, age, and health condition. Trees and bushes should not be cut which means that a park should be created through the recreation, fortifying the existing. The same principle will apply to the Hay Park: not a single tree or shrub will be removed.”

After voicing the idea of the park, the Presidential Administration has received multiple responses from organizations and individuals in Armenia and from Diaspora.

The President spoke also of another project related to the idea to create a park named after the great intellectual from Gyumri, philosopher, a native of Gyumri Gyurjiev. He informed that has already sent this Presidential proposal to the Prime Minister and government of Armenia. According to the plan, close to the Victory Park, which has a territory and two old structures next to it, to create not a home-museum but a park named after Gyurjiev. The project envisages also the construction of a concert hall, library where individuals associated with Gyurijiev will be hosted as well as other cultural events. “It is a proposal. If accepted, just like with the Hay Park, the fund will be established and I will make my contribution – material and time-wise and will be ready together with others to implement these two projects.”

Responding to the question why Gyurjiev, President Sarkissian noted that Gyurjiev has international acclaim, there are many followers of his theories and philosophy, mostly intellectuals from different countries, hundreds, thousands of people in France, United States. “They are very emotional about Gyurjiev, and if it is possible to attract them to come to Gyumri, bringing around economic ties and tourism… We are talking thousands of people who will come to Gyumri only because it is the birthplace of their beloved Gyurjiev,” he says. “Gyumri in a sense still preserves elements of Gyurjiev’s philosophy because Gyurjiev took from the world, different cultures of the region, songs and dances, philosophies and created a kind of an amalgam of life philosophy which also contains songs, some of them, by the way, are Armenian. Gyumri’s spirit will attract thousands of people.”