President Armen Sarkissian through a video call participated at the Horasis prestigious international conference: coronavirus is bellowing, “Wake up, the world has changed” 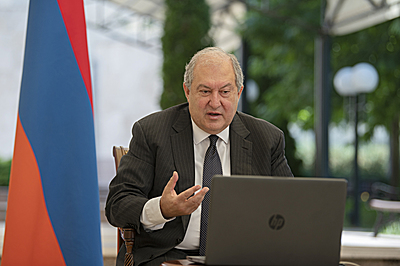 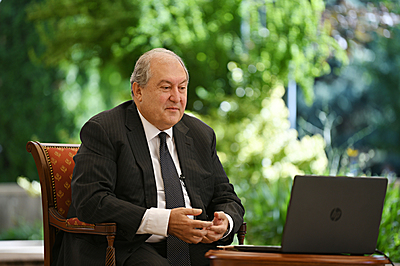 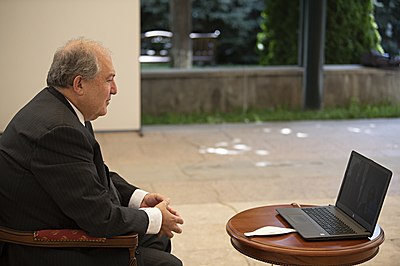 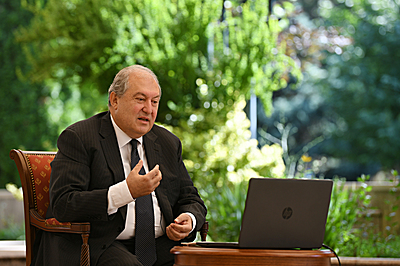 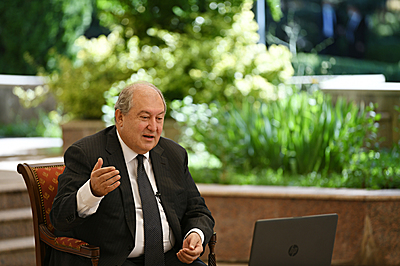 Today, President Armen Sarkissian through a video call participated at the Horasis-India prestigious international conference and made a statement titled “Changing global governance.”

Horasis is a prominent international platform which conducts major international economic conferences, including the high-status Horasis Global Meeting in Portugal. Participants of the conference are state leaders, heads of world companies and corporations, well-known experts and scholars, who discuss together global problems and challenges and try to offer some solutions. Regional conference are also held in the framework of the Horasis, among them Horasis-India, Horasis-Asia, Horasis-China which is to be held this fall in Armenia.

Horasis-India has been attended by over 400 high-level participants of the Horasis Vision community. The topic of this year’s conference are global challenges in the post-pandemic world and their possible management.

Speaking of the global situation created by the coronavirus pandemic, President Sarkissian said that the world has reached a unique milestone. “On one hand, the world is facing a huge crisis, when hundreds of thousand lives are lost in different countries, including in Armenia. This is an immense tragedy. We are facing a colossal healthcare crisis which claims lives, ruins economies, and relations. And the situation is worsening. That’s very bad.

From the viewpoint of humanism, we are also going through very emotional times. For the first time, we are dealing with a world which is so interconnected. People’s interconnection is phenomenal,” the President of Armenia said and noted that during the pandemic, Armenia has received assistance from a number of countries. “We are grateful to all those nations, who have assisted us in the fight against the coronavirus pandemic – France, Italy, Russia, Serbia, countries of the Gulf, China, and others. This is also the time for friendship and not only between the state leaders but also between nations and governments.”

According to President Sarkissian, we need to think how to expand potential of this planet, for instance, how to produce more food. “Glancing 50 years back, we can see that the great fear of the world was famine in China or India. Nobody was sure that these countries would be able to feed their one billion strong population. Certainly, there are poor countries nowadays too, but it became obvious that through modern technologies this planet can solve the problem.

Today, we are living in a period of rapid changes. It means that we can make the world a better place,” President Sarkissian noted. “On one hand, this is a tragic period of time but from a historical perspective, it’s a wonderful time, it became clear that the world will not be the classical one thanks to fast developments and great resources the human race possesses. The world has changed through new cars, robots, and artificial intelligence. We are living in a quite different world, and multiple challenges will come forward. We have to reassess many things. Multiple areas of our lives are becoming, I call it, quantum, from global risks, such as, for instance, this pandemic. The latter has turned into a pandemic not because it’s an unusual virus, but because the world has changed. Because of this new interrelated world the virus is spreading so quickly.”

President Sarkissian noted that to withstand global risks, it is necessary to change our practices and approaches and to preset our priorities for the coming one hundred years. “This is an amazing world, and in the intermediate period we face a tragedy. At this global crossroads we need to reassess our values, including democracy, because its ways tomorrow will be different. Politicians are responsible for their actions on a daily basis because there is social media and elections that take place every day. It means that our behavior too, will change profoundly,” the President said. “Look at this world. Institutions, which are based on ideology, right or left, institutions of a classical nature, currently are governed by other forces, in many cases by charismatic leaders who have direct links to the people. Such examples are present all over the world, from America to Asia. Some would say that political changes take place through revolutions, but all this is based on the changes happening with the world; the thing is we are living in a totally different world. We spend most of our lives in a virtual world. Coronavirus is bellowing about changes in the world, it calls, “Wake up, the world has changed.” There are many things we have to reconsider. We need to think how we are going to manage the healthcare system, how we get organized.”

President Sarkissian noted that we should have been to be wiser and invested into the areas of healthcare and ecology. “Protection of the nature is very important because many of us understand that future pandemics will appear because of the unhealthy relations between the nature and people. Today, we stand at the crossroads. This is a wonderful world which is going through tragic times. This is a new quantum world. Whatever we had in the past was classical. For many, this new quantum world is unpredictable, unknown, difficult and scary. For those, who will accept this new world using a new logic and new philosophy, it will become the best place to live in.”

Responding to the question on finding ways to overcome the existing situation and problems, creation of new institutes, President Sarkissian noted that there is no need to create new institutes - all should be preserved along with organizations but the role of international establishments should change. In the classical world 20, 30, 40 years ago their authority and functions were clear. But in the new, quantum world we need to reassess them without dismantling the structures. “We need to make these organizations stronger. Certainly, new ideas will be needed,” he said.

“For years, I have been musing over the idea of a club of smart and successful states. It aims at uniting small nations which are able to change, possess ability to understand and look into the future. In the club the countries will exchange ideas. I have had conversations on establishing the club with the heads of small states. This is not an alliance, economic, political or military organization; this is just a club where we can exchange ideas. By sharing, one can show other states what was done well or not so well. The world is changing, and one should not necessarily be big, super big, have huge territories, or military force. Small countries can have their say in addressing global problems, issues related to the development of information, science, and education. There are small countries which present excellent examples of doing business or education management. This will be a club which will prove that small can be not only beautiful but also strong and successful.”

In conclusion, the President of Armenia said he would be happy to host all participants of the conference in Armenia in October, at the Horasis-China conference.