President Armen Sarkissian spoke of the recent events at the border: today, when the coronavirus pandemic forces the entire world to be more humane and save lives, Azerbaijan is trying to create a hotspot 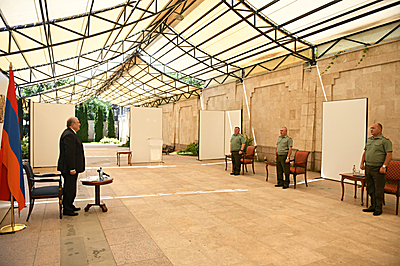 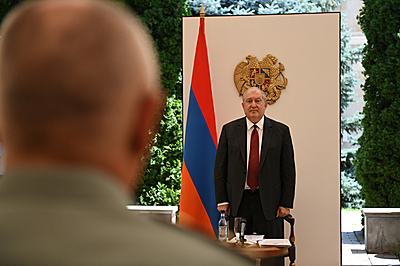 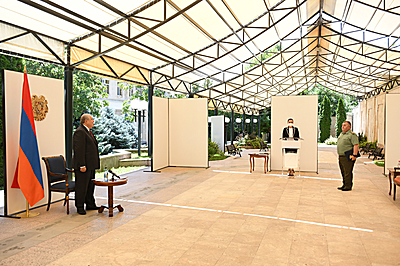 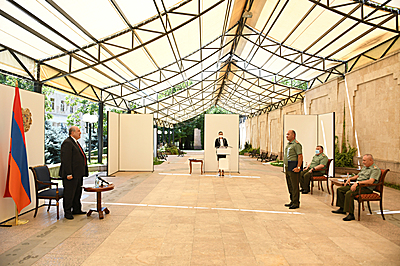 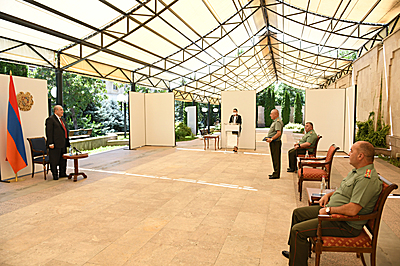 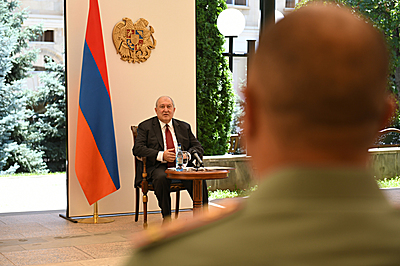 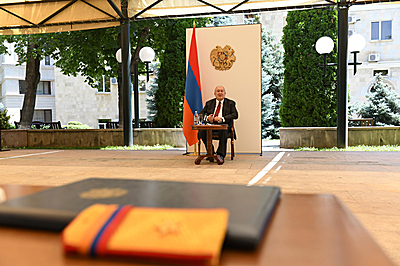 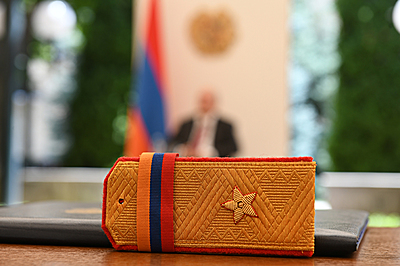 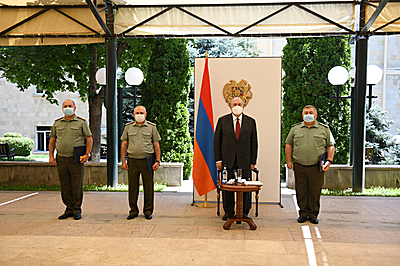 By the decree of the President of Armenia Armen Sarkissian, Major Garush Hambardzumian, who was killed during the defense operation at the Tavush sector of the state border was posthumously awarded the Second Degree Medal for Service to the Fatherland, fallen Captain Sos Elbakian was awarded the Medal for Courage, fallen Junior Sergeants Smbat Gabrielian and Grisha Matevossian were awarded the Medal for Combat Service.

“I express deep condolences to the families and friends of the heroes who fell defending our state border. I bow to their eternal memory,” President Sarkissian said at the ceremony which took place today at the Presidential Palace. The President wished a speedy recovery and rehabilitation to the wounded soldiers and wished tenacity and vigilance to our troops on the border and our compatriots residing in border areas.

The President handed general’s shoulder-straps to the servicemen, who received high military ranks, and wished success in their difficult and responsible service. “You were awarded general’s rank for the hard and longtime service,” the President of Armenia noted. “After July 12, 2020 we re-assessed once again the role of servicemen, defenders of the Fatherland, their work and service, their readiness to give their lives for the Fatherland. You belong to their number.

You receive your ranks at the difficult for our Fatherland times, when Azerbaijan has instigated military action on the northern part of our state border. These are unconcealed attempts of military aggression which are doomed to meet an inglorious end.”

President Sarkissian underscored that the aggression is yet another manifestation of animosity and hatred on behalf of Azerbaijan. “Azerbaijan’s steps are void of any human element. Today, the whole world is fighting a great fight against the coronavirus pandemic. It forces the world to be more humane and save lives. How irresponsible and inhumane one can be, to launch an aggression at this difficult for your own country and Armenia time, creating huge tension on the border which claims human lives. The situation is certainly under the total control of our armed forces. Even though we are not on the offensive, our armed force continue to dictate the conditions and maintain control of the situation.”

President Sarkissian stressed that ours is the army of peace, our troops are peacemakers and peacekeepers. But at any moment they are ready to win in any fight, in any war. “If Azerbaijan prefers the language of force, along with all our placidity, we are ready to give no less than a proportioned response to the enemy who will attack our borders, our citizens, our families, our homes,” President Sarkissian said. “Armenia values lives of each of its citizens, live of each its serviceman, every inch of our land. We are ready and able to defend ourselves, our land. We will continue to win because our troops are brave, our officers are brave, we have brave generals, and a victorious army. The army which is a strong pillar of our unity, our pride and national dignity.” Underscoring once again that the army is the main guarantor of our victories, President Sarkissian noted at the same time that in order to have a strong army, we need to have a strong economy. “And most importantly, we need to be united, unified. After July 12, the command of national unity becomes more and more acute.”

Addressing the newly promoted generals, the President said that they undoubtedly have felt the power of unity of many occasions. “Based on your example, I see it as my duty to appeal once again to our compatriots in the Republic of Armenia, Republic of Artsakh, and Diaspora, to those who take part in our lives, also to those who use the virtual world actively: our troops on the border, our officers and generals have to feel our national unity behind their backs, our togetherness, the power of our national spirit,” President Armen Sarkissian said. “I ask to be tolerant and reserved in these difficult times. It is necessary to abstain from targeting each other, looking for political opponents and personal enemies, from insulting each other. We must remember that for the sake of the Fatherland’s security, tomorrow we can appear in the same trench, side by side. At all difficult periods in our history we put aside our disagreements and become one fist. That was the case during the Battle of Sardarapat, at the beginning of 1990s, when we united and created the most powerful army in the region and achieved victories. That was the case during the April War of 2016 when from Diaspora to Artsakh and Armenia we all became one, because we knew that at this moment we have only one task – defend our Fatherland. That was the case two years ago, when in April of 2018, despite stormy political events in Armenia, all – the authorities, the opposition on April 24 and 25 set aside their differences and showed to the world that we can be different but on April 24, on the day of our national tragedy, we stand as one nation, one people. The same is true today.

At this moment, I would like to use this opportunity and express my thanks to all political forces in Armenia, in the National Assembly and outside, pro-governmental and oppositional because their vast majority today has declared that all disagreements must be put aside these days, and we must unite because once again a menace and the enemy have appeared on our doorstep.”

The high-ranking military servicemen thanked the President of Armenia and ensured that they are ready to carry out any combat-related task before them and would continue to serve the Fatherland with all their abilities and knowledge and skills.