President Sarkissian met with the heads of a number of tourism and hospitality area companies: the area of tourism was hit the hardest by the pandemic but it remains one of the most important areas for our country 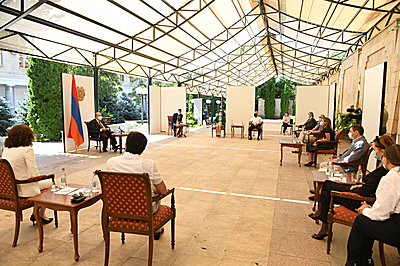 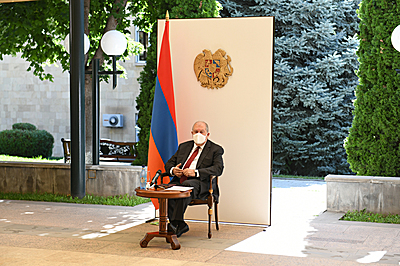 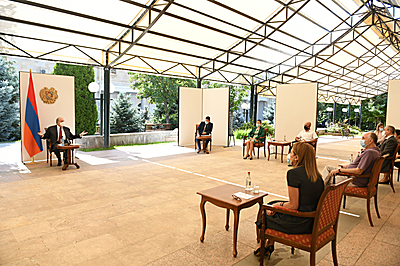 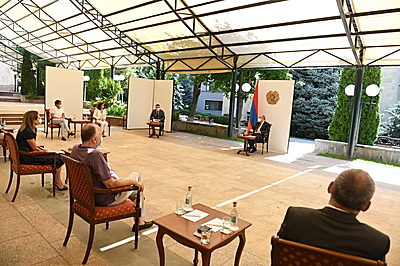 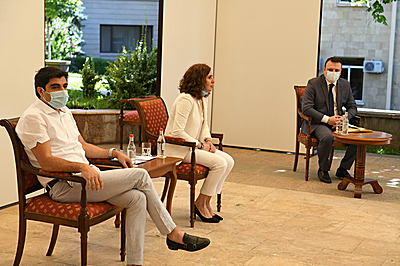 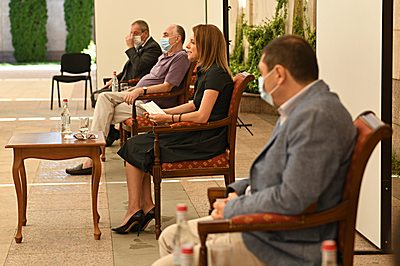 President Armen Sarkissian met with the heads of a number of tourism and hospitality area companies. Before taking up the topic of the meeting, President Sarkissian once again spoke of the situation on the northeastern part of our country, near Tavush. The President noted that under the current pandemic, Azerbaijan has undertaken irrational and inhuman steps. President Armen Sarkissian assured that the Armenian Army, though not on the offensive, but dictates and totally controls the situation. “All our thoughts and prayers are with our soldiers and their families,” President Sarkissian said and once again expressed his condolences to the families of our fallen heroes and wished a speedy recovery to all wounded.

The heads of the tourism and hospitality area companies thanked for the opportunity to hold discussions and noted that the area was hit hard by the pandemic. They voiced a number of problems and spoke in particular about the pandemic’s impact on the area, state assistance and necessity to provide tax breaks, the importance of not jeopardizing the development of this area, which is one of the promising areas for our country. In this context, they stressed the critical importance of not losing professional personnel. They spoke also of the prospects for the area’s recovery and possible solutions aimed at boosting the process.

President Armen Sarkissian noted that the tourism area is among the most promising ones for our country and responding to the raised issues said that after the pandemic, the people would be seeing the world in a different light, would be rediscovering it, and in that new world there would be new competition, including in the area of tourism. So, it is important to think today about the strategy for tourism development, steps to enhance the recognizability, branding for our country, and marketing.

The President of Armenia noted that last year, at his proposal, the UNCTAD prepared a report on Armenia’s investment opportunities. This year, conditioned by the coronavirus pandemic, in the cooperation with the Presidential Administration, the report was expanded, and included the areas which during and after the pandemic would be critical for the country’s development.

According to the President, the report presents very simple but important steps such as attention toward agriculture, which is related to food security, introduction of e-governance tools – e-education, e-healthcare, etc. It also proposes to create a rapid response taskforce which will represent Armenia abroad, and, at the same time, will assist investors inside the country. Part of the activities of the mentioned taskforce could be channeled toward tourism and marketing. “Tourism in general and Armenian tourism can play a role in creating links to our country, so that people invest here. It means that we have things to do in the area of marketing. This is an idea which we share with UNCTAD.”

The President of Armenia viewed also as important targeting the local market. “One of the areas of your activities should be the domestic market. I’ve spoken about this on many occasions: because of it, the number of visits to Gyumri has increased three times. But you too, should pay attention to internal tourism, promoting its development so that people know our Fatherland – Gyumri, Artsakh which is one of the most beautiful places in the world.”

Armen Sarkissian informed that at the initiative of the presidential institute, Armenia will hold a number of international events which will also promote tourism and recognizability of our country. He noted that soon there will be an announcement on holding the prestigious STARMUS international festival in Armenia in 2021. “It is an international platform dedicated to science, astronomy, music, and arts. I was its honorary guest last year, in Zurich, and the number of tourists reached 6000. I proposed the organizers – Garik Israelian, my friends Bryan May, Peter Gabriel to come to Armenia. It is about world-famous rock artists coming to Armenia, as well as Nobel Prize winners, scientists; it will be a festival of science, astronomy, music, and artificial intelligence. Interest toward it is huge because Armenia has a lot of things to offer.”

President Sarkissian noted also other events – Armenian Summit of Minds, Horasis-China conference, which are scheduled to take place in fall, and which also attract great interest. “These are events which could promote tourism. Many of the guests are coming with their families, discovering Armenia, and creating ties.” In his words, the idea to create an all-national Hay Park on the territory of Tsitsernakaberd, which is aimed also at our nation’s unity, will also boost tourism.

At the conclusion of the meeting, the President noted that even though the area of tourism is among those hit hard by the pandemic, it remains among the most important areas for our country, “The world should learn about Armenia also through your work.”