Armenia can become a participant of the greatest international projects: at the initiative of President Armen Sarkissian the STARMUS VI Festival of science and arts will take place in Armenia 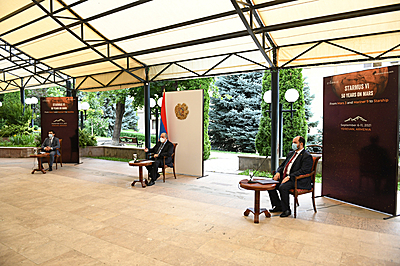 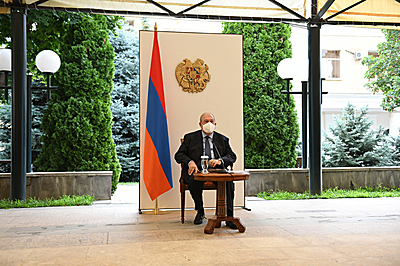 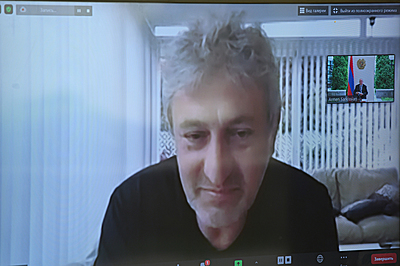 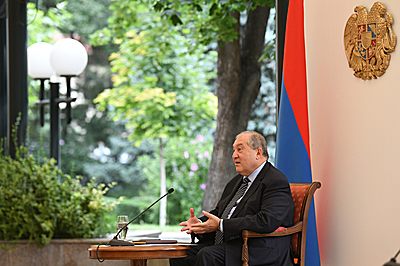 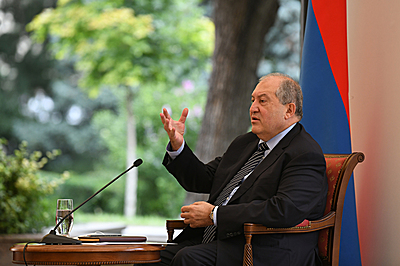 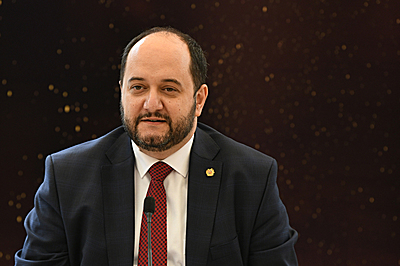 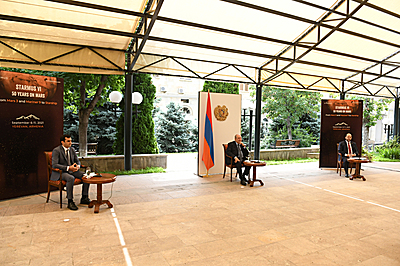 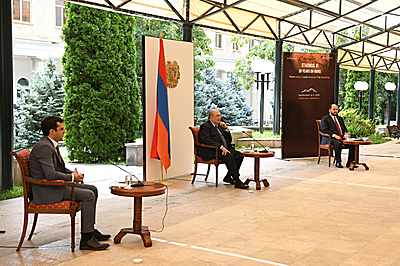 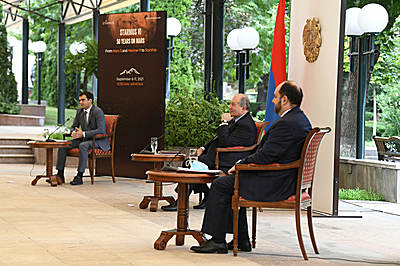 The STARMUS VI (Stars and Music) International Festival of science and arts will take place in Armenia in 2021 under the auspices of the President of Armenia. It will be dedicated to the 50th anniversary of the Soviet MARS 3 and NASA MARINER 9 missions to the Red Planet - Mars. The official announcement has been made today during the online meeting dedicated to the Festival. The participants from Armenia included the President of Armenia Armen Sarkissian, Minister of Education, Science, Culture and Sports Araik Harutyunian, Minister of High-Tech Industry Hakop Arshakian, from Spain – the co-founder of the STARMUS Festival, Director and Council Member Garik Israelian, from the United States – member of the STARMUS Festival Council, American astronomer Jill Tarter, member of the STARMUS Festival Council, Editor-in-Chief of Astronomy magazine David Eicher, from Switzerland – Advisor to the STARMUS Festival, astronomer Michel Mayor.

The co-founder of the STARMUS Festival, Director and Council Member Garik Israelian made opening remarks and announced that the STARMUS VI Festival is scheduled to take place in Armenia, on September 6-11, 2021.

President Sarkissian expressed thanks to the Council of the Festival for the decision to hold it in Armenia, and said in particular, “Please be assured that the Festival will a be excellent and special, and together with us, you all will be proud that it is held this time in Armenia. It is a very important international festival. I had the opportunity to take part in the previous festival which was held in Switzerland. It was very impressive since the Festival was attended by thousands of visitors from all over the world. The idea of uniting, bringing together science, technologies, and arts was very interesting,” the President of Armenia said. “The next festival should be a little different. If music, I would like to engage not only rock but also contemporary music, classical too; if science, then different areas of science. We would be very glad if some Nobel Prize winners visited Armenia who during that one week will not only convey new ideas and notions to the visitors but will also inspire our scientists and scientists visiting Armenia as well as our young people.”

President Sarkissian underscored that among other objectives of the Festival is education, channeling young people toward science, the area of new technologies, toward the future. “The future is also about the dream that Armenia can become a participant of the greatest international projects up to missions to Mars, with the understanding that future success of our country is closely linked to modern technologies,” the President noted. “I wish that STARMUS is in some way connected to the most important issue of the 21st century – artificial intelligence.”

The President stressed the importance of holding the Festival in our country. “The Festival will be very important for Armenia,” he said, “especially after coronavirus because in every country there are certain areas which have suffered. The first is certainly tourism, related hospitality business, services, restaurants, and cafés. I hope that next year Yerevan and Armenia will be filled with tourists again; they will come to Armenia to participate to the Festival and support in a way these areas.”

President Sarkissian noted that he suggested to hold the Festival in Armenia one year ago. “When one year ago, during the STARMUS Festival in Zurich I offered to hold the next festival in Armenia, part of the audience accepted the proposal very enthusiastically. But there were also some, who, quite honestly, didn’t know where Armenia was. But I hoped that the Festival would come to Armenia anyway, and from that day on I have been telling about it all my international partners, also our colleagues in Diaspora. I am confident that when next year Armenia for one week becomes the international center for technologies, modern science, music and arts, the feedback will be very positive. I have no doubt that majority of thousands of visitors will be our compatriots from abroad. Their feedback has been very positive, and I will continue to assist in keeping it that way.”

The Minister of Education, Science, Culture and Sports Araik Harutyunian in his turn welcomed the decision to hold the STARMUS VI Festival in Armenia. “Considering the importance of the STARMUS Festival, we anticipate a series of special and remarkable meetings and conferences, as well as diverse, impressive and unforgettable events which will unite science and arts and will present to the public spiritual and intellectual values in a new light,” the Minister said. “Because of its unique nature, the event will allow to boost the development of science and arts in Armenia and will create a perspective which will allow to view science and arts not as separate notions or opposites but as a uniquely intertwined and interrelated entity. I would like to thank the STARMUS UNIVERSE 2007 SL organization in the person of its founder Garik Israelian and all our partners who have made their contribution to the inception of this idea.”

The Minister of High-Tech Industry Hakop Arshakian in his remarks noted that science and scientific work not only in Armenia but also all over the world is not fashionable nowadays, while the Festival, which brings together rock music, science and especially astrophysics, makes scientific work much more appealing, especially for the young people. “It means first of all to be a leader, to be avantgarde, and to be innovative, and with this regard we need to note that the forces, which push the world forward, are the forces of innovations.” Noting that space technologies among the high-tech areas are one of the most developed ones, the Minister said that this area is viewed in Armenia as a priority too, and signifies prospective programs for development. “Armenia is a land of opportunity not only because we gave scientists like Kemurdzhian, the first constructor of Mars rover, Hambardzumian, Shirakatsi, musicians like Khatchaturian and Komitas, but also because today Armenia’s government views the area of high-tech industry as a priority while science and technologies are inseparable.”

The Minister urged the young people to think what they would do in September of 2021 or before that to get the utmost from the event which would bring all its opportunities to Armenia.

The member of the STARMUS Festival Council Jill Tarter noted that she was looking forward to the Festival in Armenia. “For me, as an individual, who is trying to discover life beyond our planet, this date is of a special significance because precisely 50 years ago in September, the first US-USSR joint conference took place at the Byurakan observatory related to the extraterrestrial intelligence explorations. At that time, I was a postgraduate student and was not able to participate to that conference. But I hope very much that this time I will be able to come and see the observatory, where the historic event took place, myself,” the American astronomer said. “I hope we will be able to unite many scholars, young people, and citizens around the idea of exploration of extraterrestrial intelligence and change the world so that people perceive themselves as terrestrials.”

Advisor to the STARMUS Festival, astronomer Michel Mayor in his turn expressed satisfaction with the fact that the Festival will be held in Armenia. “I am very happy and am dreaming of coming to Armenia,” the Swiss astronomer said. “Armenia is a very beautiful country, and it is fantastic that the next Festival will be held in this country. This Festival is a special event. I’ve traveled in Armenia. It’s a country of ancient culture, monasteries and churches, with a beautiful landscape which has a millennia-long history. I’ve visited very beautiful sites in Armenia but would love to see Tatev. If you are going to participate at the Festival, don’t miss the opportunity to see Tatev.”

The member of the STARMUS Festival Council David Eicher noted that there are multiple reasons to hold the Festival in Armenia. “I am very glad we will cooperate, will bring enthusiastic experts of our area to Armenia,” the Editor-in-Chief of Astronomy magazine said. “This is the most important era for astronomy, the Golden Age: developments are taking place with the speed of light. We hope very much that the Festival will have a great numbers of participants.”

Concluding the online meeting, the co-founder of the STARMUS Festival, Director and Council Member Garik Israelian stressed the importance of holding STARMUS in Armenia. “For me, it was very important to bring STARMUS to Armenia,” he said, “the period of inspiration in my life I spent in Armenia. I never thought that STARMUS could ever take place in Armenia until President Sarkissian visited Zurich and made this invitation. Related to coronavirus, the value of science and its significance has risen manifold. We see that hopes are pinned on science, on the scientific solutions. The difference between Mars, coronavirus, and space travel is not much because at any case we are speaking of science. There can be no science without inspiration or education. Now, we are living in a different world, and I’ve always believed that inspiration should be its very important element. Young people need to be inspired all the time, should be interested because it is difficult to achieve desirable results only through education.”

He informed that the Festival in Armenia will have an interesting program related to different areas of Mars and science. “This year, three missions will be sent to Mars and will get there next spring. We will have totally new materials at STARMUS, and the latest news on Mars exploration will be received during the Festival,” Garik Israelian noted. “It will be a very interesting Festival. Soon we will start works on the program which will be the most engaging, and as the President said, it should be the best STARMUS among the recent ones. I am very glad that the government of Armenia joined this initiative, and everyone is thrilled with this idea.”