President Sarkissian participated at the first class of the international summer school titled “Armenia and the World: Building a Sustainable Future”: We have a strong country and a successful Diaspora. I believe that together we will be very powerful 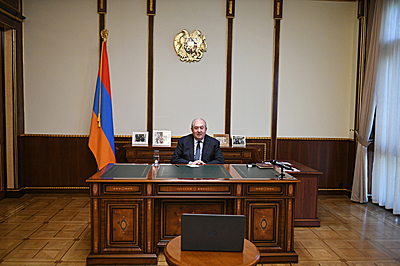 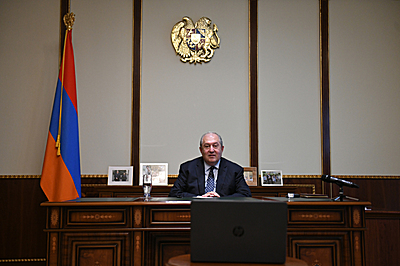 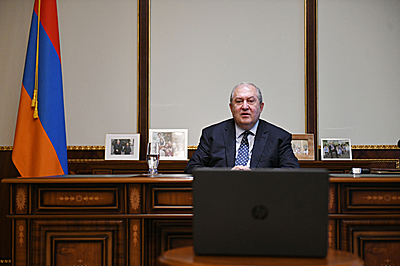 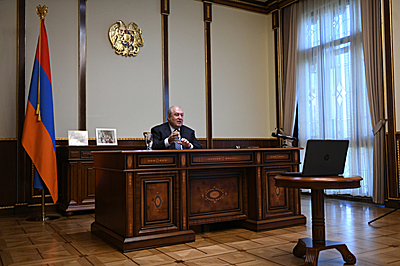 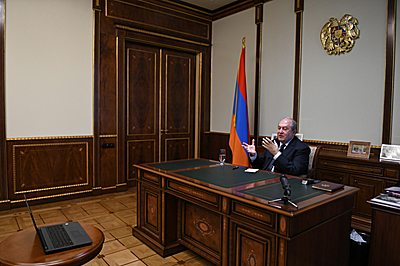 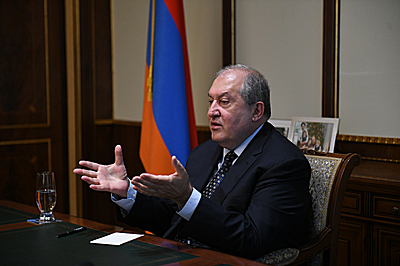 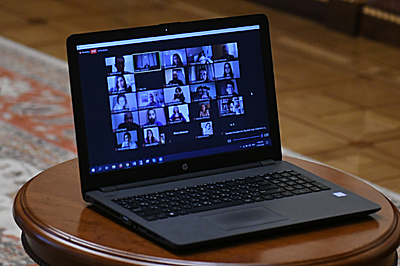 President Armen Sarkissian participated through a video connection to the first on-line class of the international summer school of the Armenian-Russian (Slavic) University titled “Armenia and the World: Building a Sustainable Future.”

Participants of the summer school are students, young scholars, and experts from Armenia as well as from Diaspora, Armenians and foreigners. In the framework of the classes, which commenced on July 27 and will end on August 12, the participants will learn through lectures about the main directions of Armenia’s foreign policy, will receive comprehensive information about the ongoing processes, and will discuss Armenia’s place and role in the rapidly changing world.

During the video conference, the participants of the summer school asked the President some questions. In particular, responding to the question related to the role of the president in a country with the parliamentary system of governance, Armen Sarkissian said, “Sometimes people’s expectations are very high and unrealistic; the Constitution and the format of a parliamentary republic preclude the president from fulfilling these expectations, and the president personally doesn’t possess the necessary toolbox.

In two years of my presidency, one of my tasks has been to explain to the people that in a parliamentary republic expectations from the presidential institute should be realistic, and sometimes even to give guidance on what to expect and what to do. My understanding of presidency includes vigorous activities but in full compliance with the constitutional limitations. Presidential tools or duties are pretty limited. Nevertheless, even in such a restrained format there are opportunities which we can use. We employ some of them in the form of presidential initiatives. They do not contradict or oppose activities and programs of the government but rather serve as guidelines on which way to go.

One of such examples is the Hay Park project which has been announced months ago. In Yerevan, on the territory adjacent to the Museum-Institute of the Armenian Genocide, which is close to 100 hectares, I have proposed to carry out beautification works and turn it into a park. The park will carry a number of messages, and one of them is to serve as a memory park. The big park will comprise smaller parks which will represente the lost regions in the historical Western Armenia. The second segment of the park will represent Armenian Diaspora, while the third one will symbolize the modern Armenia.

In fact, this is an idea which is aimed at uniting us all. This should be a park of Armenian unity. This is not a park with cafés and restaurants. First of all, our country needs such a park as a source of clean air. The park may have a nice evening gathering place for the citizens of Armenia and their guests. This is a presidential initiative which will promote national unity.”

In response to one of the questions, the President stressed the importance of national unity. “We have to rely on our own strength,” President Sarkissian said, “We have a strong county, successful and united Diaspora. I have no doubt that together we will be very powerful.” The President noted that we need to use efficiently the fact that many Armenians live abroad. “Our task is to use that opportunity in the fullest. Armenia must become more secure and stronger,” the President said.

In the framework of Q&A, speaking of the tension on the border, the President of Armenia underscored once again, “Now, when the entire world is fighting against coronavirus, our neighbors have decided to resort to military actions which is inhumane. The fact of the matter is that Azerbaijan instigated that conflict on the border, and the truth is that the Armenian Armed Forces proved that they are the strongest army in the region.”

Responding to the question on why he allocates so much time to young people and why this kind of discussions are important for him, President Sarkissian said, “I believe that even though we are a very old nation, we are also very young. This city is young too. It’s over 2800 years old but very young. This is also a city where every foreigner can see its biography. With regard to creating startups, Armenia is among the leaders in the world because we are a young nation. I see myself as a young president. My advice to you – while evaluating someone as young or old, never think of the years they have lived. Being young is about how young is your soul, mind, mentality. Young are the people who are ready to learn every day. One of the president’s duties in my opinion is to be a teacher. I used to teach at the Yerevan State University, then in different universities of the world, including Cambridge. To teach means to exchange experience. For me, teaching also means learning from you, staying young, being young like you. Since we are a young nation, and I hope, will remain young forever, I would like next presidents to be younger and give part of their time to young people, helping them to become successful in their lives.”

One of the questions raised by the participants of the summer school pertained to environment. The President of Armenia noted that issues related to the nature and environment are always in the center of his attention, “We will win big if we are able to maintain clean, pleasant, and ecologically clean environment. Armenia can attract people with its cleanness. Tourists and foreigners will come to Armenia when they learn that Armenia is a clean country, has pristine nature, a country where the values of the world’s heritage are appreciated. Heritage can be historical, like, for instance, our churches and history, but nature is also a heritage. The ecologically clean Armenia can be very attractive.”

Responding to the question related to the development of tourism in Armenia, President Armen Sarkissian first noted that because of the coronavirus pandemic, situation in the tourism area is pretty hard. “Great efforts will be needed to return to the previous condition,” the President of Armenia notes, “The important thing is for Armenia to have a recognizable brand which will make clear why tourists should come to Armenia and not some other country.” In particular, President Sarkissian viewed as important for the tourism development the STARMUS VI International Festival to be held in Armenia next year.

Speaking of the idea to create a club of small nations, President Sarkissian said that he had had that idea even before he was elected president. “I have spoken to a number of heads of countries and international organizations. I believe the official announcement about this initiative will be made soon,” he said. “This will be just a club, not a union or organization, not for or against any structure. It will be a club of small and smart states. The history of successful countries will be represented in that club.”