President Armen Sarkissian: “The Treaty of Sèvres even today remains an essential document for the right of the Armenian people to achieve a fair resolution of the Armenian issue” 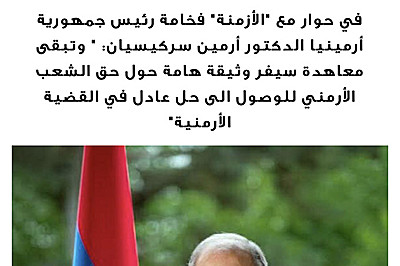 Question: Mr. President, August 10 marks the 100th anniversary of the the Treaty of Sèvres which after WWI was signed at the Paris Peace Conference by the 13 victorious countries of the Entante on one side and the defeated Ottoman Empire on the other side. The Treaty was called to solve the tormented for decades Armenian Issue and end sufferings of the Armenians. Your opinion?

Answer: The Treaty of Sèvres in its essence was a peace treaty and with this regard it really could have solved fundamentally one of the thorniest for our region problems – the Armenian issue.

The Treaty of Sèvres was preceded by the first conference, which took place in February-March 1920 in London where a political decision was adopted that one, unified Armenian state must be created. At the same time, the Republic of Armenia, which was de facto recognized on January 19, 1920 at the Paris Conference, was accepted as its axle and some territories of Western Armenian under the Ottoman rule should had been united with it.

By the Treaty of Sèvres, Turkey was to recognize Armenia as a free and independent state. Turkey and Armenia agreed to leave demarcation of the borders of the two countries in Erzrum, Trabzon, Van, and Bitlis provinces (vilayets) to the decision made by the United States (the arbitral award of President Woodrow Wilson which on November 22 will also mark its 100th anniversary) and accept his decision immediately and all other proposals – to provide Armenia with an access to the see and demilitarization of all Ottoman territories adjacent to the mentioned border line.

Question: But the Treaty of Sèvres remained on paper…

Answer: I would rather say that the Treaty of Sèvres was not fully ratified (which means it remains unperfected and it is true that when it comes to Armenia its decisions were not implemented because the international political situation had changed but, at the same time, it was never denounced either.

The Treaty of Sèvres is a legal, interstate agreement which is de facto still in force because this document became the base for other documents, which derived from it, for determining the status of a number of Middle East countries after WWI or more recently, among them Syria (currently Syria-Lebanon) and Mesopotamia (currently Iraq-Kuwait), Palestine (currently Israel and Palestinian authority), Hejazi (currently Saudi Arabia), Egypt, Sudan, Cyprus, Morocco, Tunisia, and Libya.

It could have partly mitigated the losses inflicted on the Armenian people by the Genocide of 1915 and thus create conditions for the regulations of the relations between Armenia and Turkey and establishment of a lasting peace among the peoples of our region.

But in September 1920, the aggression unleashed by the Kemalists against the Republic of Armenia ended in the dissolution of the Armenian independent statehood and sovietization of Armenia.

Thus, the centuries-long struggle of the Armenian people for uniting in one state entity the separated parts of Armenia was unsuccessful.

But the Republic of Armenia and Armenian nation spread all over the world remain the inheritors and masters of our millennia-long history and civilization. No matter what was done or will be done, no matter how the undeniable facts are being denied, no matter how much the material monuments and Armenian traces on the territory of historical Armenia are being destructed, it is impossible to annihilate the memory of the Armenian people.

Question: Let’s get back to our times. The Middle East, which is an immediate neighbor for the countries of the South Caucasus, has become a hot spot once again: armed conflicts, civil wars, fight against terrorism, territorial disputes. Border clashes took place on the Armenian-Azerbaijani line of contact in mid-July which claimed human lives and created extraordinary tension between Yerevan and Baku.

Answer: Yes, these days when the entire world and we are fighting against our common enemy, the coronavirus pandemic, and regardless of the fact that conflicts all over the world have been halted, our neighboring country - Azerbaijan tried to take advantage of the situation and use in the negative sense this “window of opportunity” to unleash aggression on the Armenian-Azerbaijani border. Fortunately, the Armenian Armed Forces demonstrated their high battle-ready spirit and literally in two or three days were able to contain the encroachments of the opponent and thus saved our region from the blazes of large-scale clashes.

Question: The UN, EU, OSCE, various capitals made statement on these extremely dangerous developments, urging the parties to maintain peace and dialogue. And only Ankara’s tone was bellicose, in full support of Baku’s actions.

Answer: It is true that the international community responded widely to these events. It is especially true with regard to Moscow, Washington, and Paris - the Co-Chairs of the OSCE Minsk Group on the Nagorno-Karabakh conflict. But the Tavush events raised some serious concerns.

My first concern relates to a very aggressive rhetoric of our southern neighbor – Turkey. Turkey has been using with regard to Armenia a kind of language which is inappropriate in the international relations. And this is absolutely unjustified and irresponsible. Keep in mind that this is the country which was the scene of a great human tragedy, the country which 105 years ago executed a genocide against our nation. And instead of trying to establish bridges with Armenia by recognizing those black pages of its history, they resort to a language which in fact reveals their intention to carry on with what was done 105 years ago.

The second concern is Azerbaijan’s attempt to create an impression that Armenia poses a threat to the international infrastructure which is going through Azerbaijan. This is total nonsense. These infrastructure has been in place for over 20 years, and Armenia has never had any intention to destroy it. My message is the following: Armenia has never been and will never be a threat for anyone because we are the successors of those who went through the Genocide and survived. We know all too well what suffering means, we know the human values. I am concerned that when the entire world is fighting together against the coronavirus pandemic, some are undertaking inhuman actions.

Another concern is about official statements coming from the government of Azerbaijan or relevant structures on Azerbaijan’s threat to hit the Metsamore nuclear plant. I am a physicist and know very well the real consequences of a strike on a nuclear power plant. Thus, I take these statements as an intention to carry out a terrorist act which in international relations is defined as nuclear terrorism. God forbid it happens one day, we will have a Caucasian Chernobyl. Not only Armenia will be affected but everyone, including Azerbaijan, Turkey, Georgia, Middle East…

Regardless of what problems exist between the country and neighbors, playing with fire of nuclear issue is unacceptable.