We need an era of quantum politics 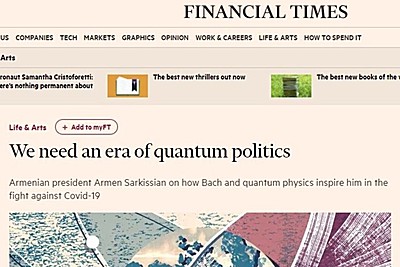 A reputable British Financial Times daily in the Life section of its Saturday edition published “We Need an Era of Quantum Politics” essay by the President of Armenia Armen Sarkissian in which he ponders over his daily life, scientific and diplomatic work, the changing world, and the coronavirus pandemic.The newspaper in this section usually presents ideas and life episodes of the renowned state, political, science, and culture figures.

Alec Russell, the editor of this media outlet, which is a heavy-weight in the global media field and in international political and economic circles, approached President Sarkissian with the proposal to write an article months ago. The article was sent to FT in June and published in its August 29 edition.

I wake usually about 6am. I generally do not need a lot of sleep and I’m not someone who finds it hard to switch off after the day’s preoccupations.

Other people need tea or coffee to start their day, but for me it’s Bach. For many years, Johann Sebastian has been part of my morning routine; his music gives me a charge of energy and positive emotions that stay with me through the day. Just a few minutes is all it takes; there’s a precision and beauty to Bach’s compositions that appeals.

I certainly enjoy coffee — a ristretto does not hinder the appreciation of Bach — but not in summer. Now I start my day with apricots; just two of them fill the room with a heavenly aroma. Apricot is well known in academic circles as Prunus armeniaca, and nowhere in the world does it smell better or taste sweeter than in Armenia. Its introduction to Greece, and Europe, is attributed to Alexander the Great. Among other things, it’s an antioxidant and it’s good for your heart — fresh or dried.

I leave my home in Yerevan, Armenia’s capital, and travel the short distance to the presidential palace. My wife Nouneh and I love to walk when we can. Before the epidemic we would do so frequently, hugging people on the way. Now we can only wave and tell them it’s important to keep their distance. That’s tough.

One consequence of the pandemic familiar to office-workers around the world is that my schedule is filled with video conferences. I have a skeleton staff in the office and I know the situation places huge pressure on them. The presidential palace is not quite Buckingham Palace, but it’s still big enough to enforce the “one office, one employee” principle that we have been following for months. Though located next to each other, we prefer to communicate via Skype.

But I believe the most enjoyable part of our work day comes with my outdoor meetings. The guests, my staff and I love working outdoors — it is stimulating and eco-friendly (no air-conditioning). You may call it the Armenian knowhow — the president of the country working outdoors, fresh air, birds and trees, pastoral and idyllic — except for the pandemic raging beyond the walls.

Strict rules were imposed on the island known as the presidential palace in February when the capital and the country at large were not yet aware of the nightmare on its way. Back in those early days, I received the ambassador of China, who was asked to maintain social distance, which he did eagerly, mindful of the situation back home. There was a public outcry that we had been too strict and cautious, and embarrassed the ambassador of a friendly country. But better safe than sorry . . .

In a past life, before diplomacy and politics, I was a physicist, and science remains my first love. It has been useful when discussing the pandemic with world leaders. It has also shaped my approach to the presidency in arguing that we need quantum politics to tackle today’s challenges. What do I mean by this strange concept, you ask?
Quantum politics is simply a new way to understand how politics has changed from the days when technology and connections were not so ingrained in the world. The pandemic is accelerating the transformation of the classical world of the 20th century and before — where organised forms of connectivity mattered — into a quantum world where change is faster and more unpredictable, and can be more random. The individual particle — or, in this case, person — is immensely powerful now via the world wide web.

The digital revolution was facilitating this transition before coronavirus appeared. To fight pandemics, manage financial crises and other risks, we need to change not only our lifestyle but our perspective. If we start thinking about this world as a quantum world, we will find the logic behind events and be able to predict them with some degree of probability. The challenge we face is not about the virus. Yes, it’s tragic. But we’ll be making a mistake if we see the virus as a one-off event that will never happen again.

In its most basic form, the virus presents a dilemma for all countries — it’s the economy versus human lives. Yes, economic life must go on but personal responsibility and common sense ought to prevail. Armenia isn’t a wealthy country and our people need to work to support their families, but we also have to stay vigilant because the epidemic hasn’t reached its peak here yet. Unfortunately, relative to our population the virus has hit harder than in many countries.

How is Armenia doing? Well, in one word, fine; in two words, not fine. The lockdown has been hard on everyone but you will not feel it looking at people on the streets. The attitude is, I would say, nonchalant. “Coronavirus? I’ve seen worse than that” — that’s the attitude of some, unfortunately. For me, the worst part is that we are getting used to it, we live with it, almost neglect it. I know that is wrong, as I tell different audiences every day.

I try to find time in the evening to speak to my younger son, Hayk. I am writing a book with him called A Quantum World, which expands on the concept of quantum politics to understand how the dynamics of human progress and global risk have changed in a highly connected world with so much uncertainty. My son and I have had theoretical and philosophical discussions for over a decade. But it is only since March, with the limits to social life and travel, that we have found the time to speak frequently.
Hayk, who is 36 and runs his own private equity business, spent his time during lockdown in London writing our dialogues. He is an early riser so would spend the morning and late evening writing, sending me drafts of new chapters. Usually at the weekends, we would have long calls to discuss the concepts and refine the book together. It fills me with pride and joy to be able to share this journey with my son.

The aim of our book is to provide a framework to help people navigate the future, stemming from the fact that we are at a turning point in the history of humanity where we are unavoidably connected to each other at an unprecedented scale. The old rules of interaction and engagement apply less today as quantum rules take over, resulting in more randomness and unintended consequences, local, global and personal. This inevitably reshapes what politics will look like in the future. If we still apply classical models to a quantum world, we will hold ourselves back immensely.

Yet human progress is non-linear, with creative and destructive properties. The pandemic is a consequence of this connectivity but also itself a process of change for humanity — in that if it is harnessed in the right way, we can use the opportunity to challenge long-held beliefs and rigid structures that are outdated and develop more effective systems suited for a quantum world.

Yes, there is tragedy around us, yet there has never been a better time to reform education, optimise the food chain and embrace climate change incentives. Our aim is to offer a new framework for readers for their respective fields to challenge us and their thinking.

If there is time after all this, I like to read late into the evening (today it is Life on the Edge by Jim Al-Khalili and Johnjoe McFadden) without any distraction, although I try to be in bed by midnight. There’s always much more to do tomorrow.