President Armen Sarkissian’s congratulatory message of the occasion of Artsakh Independence Day: Artsakh was the spark which lit the fire of freedom 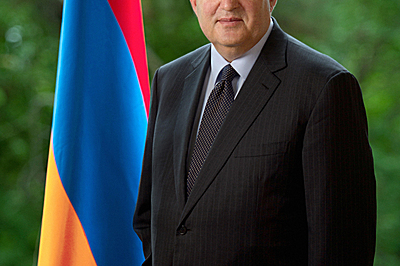 I extend my congratulations on the occasion of Artsakh’s Independence Day.

Artsakh was the spark which lit the fire of freedom which spread all over the Armenian world. Our people rose to defend their rights and to take their worthy place in the modern family of nations. This was a truly historic time for the realization of our aspirations and abilities and its significance was duly appreciated in Artsakh as well as in Armenia.

Declaration of independence became the catalyst which allowed to form a sovereign statehood.

Today, 29 years later, the Republic of Artsakh is a mature state unit thanks to the struggle which is being fought by all-Armenian forces, thanks to the victory, which was achieved through the unity of Artsakh, Armenia, and Spyurk, thanks to the willpower which is leading the people of Artsakh, and today has become the promise of their success.

I bow to the memory of all fallen heroes who sacrificed their lives for the free and independent Artsakh and express gratitude to all who gave their health and well-being to achieve that goal.

Artsakh was a touchstone for our national willpower, and today it remains the pivot of our national unity. For us, as a nation, every achievement in Artsakh is a stone to the restoration of the huge Armenian world. Thus, our mind and effort, our work and ideas ought to be directed towards the protection of the Fatherland, security and peace of Artsakh and Armenia, well-being of our nation.

This notion should be the strongest in each of us because the fight for Artsakh’s full freedom, for the restoration of the violated rights of our people is not over yet, it continues.

I congratulate once again on the occasion of the Independence Day of the Republic of Artsakh and wish peace, well-being, and optimism.