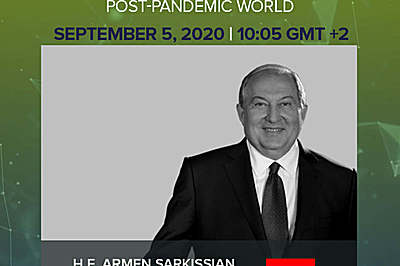 This prestigious international platform this year was held on September 4-5 in the online regime and united over 90 leaders from all over the world as well as the heads of major international organizations. They discussed opportunities for the economic recovery in the post-pandemic era.

The participants of the Summit, who also made welcoming remarks, included the UN Secretary General António Guterres, presidents of Brazil, Angola, Ghana, and Crown Prince of Jordan.

President Sarkissian noted that this is not only about revolution; the human kind is going through profound changes. “Francis Fukuyama spoke of the end of history. He was probably wrong, but, at the same time, he was right in a sense that the history of the previous civilization was reaching its end. We are entering a new civilization. I call that civilization, or a new era of our development, a quantum world, a world in which every individual or an element becomes very powerful, a world in which the small can be not only beautiful but also strong. From that point of view, if we discuss the industrial revolution, I call it not the 4th industrial revolution but a new era of a rapid change, not a revolution but a fast evolution,” the President of Armenia said. “Thus, revolutions will come one after another, they will be industrial, scientific, technological, which means we will be constantly going through changes, may even have a feeling of instability, but, at the same time, we are entering a new, great world. Hence, probably Fukuyama was right in a sense that we currently reached a new civilizational milestone, starting from the beginning of the 21st century. Certainly, we are using the knowledge accumulated in the areas of science, technologies, as well as the results of developments of the 20th century.”

Responding to the question on how the people of Armenia prepare for that era, President Sarkissian said that the entire human kind is facing aggressive, fast changes and not only technological and behavioral but also related to the values. “Before moving forward on a global scale, we need to think about the new world, need to reassess our main values and certainly be very, very careful about what we do. I believe the key word here is “heritage”. From the previous century we inherited international structures, relations, the UN, for instance. We need to preserve that good and think at the same time what we can change, adjusting it to the future,” the President said. “As for Armenia, our country too, suffered from the pandemic, just like any other country. We will face the same challenges but the solution here is to be in vanguard of the future. If we view the society as a train, it is better to be closer to the locomotive rather than at its end. To achieve that one evidently needs to work hard, to make huge investments. There is a simple and old solution for that – to invest in education, science, and technologies. This is a quantum world in which the individual can do a lot and it’s not important where that individual comes from, Africa, Latin America, Asia, or Europe. Hence, invest in education, science, and technologies, make your country a real member of the international family in a quantum world. This is the message.

The future is in making investments in the areas of education, science, and technology. As the president, I have an initiative which is called ATOM (Advanced Tomorrow). It has different components, mainly strives to create joint ventures with the companies well-known in the area of artificial intelligence because the future is in artificial intelligence, as well as to hold international summits, such as the Armenian Summit of Minds, STARMUS Festival, bringing to Armenia scientists, researchers, major companies – all for the future development. I am certain that a small country can be an advanced one. This is the 21st century, and it is quantum, and there are many examples – Singapore, Qatar, UAE, Israel which were smart enough and have different sources of income and different opportunities in the economic area. All these countries have one thing in common: first of all, they all invest in science, education, and technologies. This is the road toward the future.”

On the question whom Armenia, which is located at the crossroads of Europa and Asia, views as a partner, President Sarkissian noted that the entire world is our partner. “I want to bring companies from US, Europe, Asia, from North and South. That’s the reason I am focusing on another initiative too. I’ve spoken with the leaders of a number of small and successful states and pushed forward the idea that we need to create a club. This is neither an alliance, nor an international organization, this is not pro or con to anything. This is a venue where small and successful states gather and present their experience, what’s been done right or wrong. This club will help small states because they too, can be powerful in the quantum world of the 21st century,” the President said. “I’ll give you a simple example. Thirty years ago who would think that the small states of the Persian Gulf would be able to send a scientific mission to Mars? It is hard to believe, but today that’s the reality. Today, a new world opens up for small and smart states, and I aspire to make Armenia one of them.”

Responding to the question on how to move forward in the future world, President Sarkissian noted that in a difficult transition from the old to a new world reason should not be overlooked, humanity and appreciation of everything created before. “Armenia is the first Christian state of the world. In our country, we have ethnic, religious, and eco-gastro tourism which however suffered from the pandemic. The pandemic is still there because the whole world is interconnected, we travel a lot. There are all prerequisites for virus to spread quickly all over the world. Coronavirus reminds us that the world is changing. We are on the crossroad and have no idea where to go – right or left, with whom, is the world unipolar, bipolar, or multipolar? And I am concerned with that uncertainty because uncertainty, when reasonability is lost or human dignity, it becomes very easy to blame your mistakes on somebody else,” President Sarkissian said. “I see problems in this world which emerge because of the transformation. As the President of the Republic, I have had such experience recently: while Armenia is fighting against the coronavirus, our neighboring Azerbaijan, which is fighting coronavirus too, instigated military actions on the border with Armenia. Another our neighbor, Turkey, voiced coarse rhetoric which for me, as an Armenian, is concerning and takes me back 105 years, when the Ottoman Empire carried out the Armenian Genocide. I am also concerned with the threats of the Azerbaijani officials to attack the Armenian nuclear power station. It will harm not only Armenia but all our neighbors, up to the countries of the Gulf and will become a Chernobyl for the region. I hope that during this difficult transition from the old world to a new one, we will not lose reason, will be humane, will focus on the future and will appreciate things we created before. For that very reason, I use the word “heritage.” The UN is very valuable and powerful heritage which we have in the 21st century. The only thing we have to do is to reinforce and give a new meaning to that wonderful organization which has played a special and useful role for decades. Elimination of our heritage is a wrong way to move forward. The road towards the future should be based on our success and achievements.”