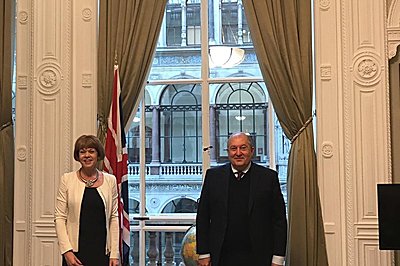 President Armen Sarkissian, who is spending part of his vacation abroad, in London held a meeting with the UK Under-Secretary of State for European Neighborhood and the Americas Wendy Morton.

At the meeting, the parties discussed issues related to the prospects of developing and deepening cooperation between the two countries. Under-Secretary Wendy Morton informed that next year the United Kingdom was planning to host the Climate Change Conference (COP 26) and Armenia was expected to participate to the event. Ms. Morton asked about Armenia’s approaches related to the climate change issues. In response, the President of Armenia noted that he personally is a proponent of a “green” approach and has been constantly stressing the importance of ecology. In this context, the President of Armenia spoke of his idea to establish an all-national park – Hay Park on the territory of the Armenian Genocide Memorial in Tsitsernakaberd which is aimed also at expanding Yerevan’s green zones.

President Armen Sarkissian introduced a number of other presidential initiatives. In particular he spoke of the ATOM (Advanced Tomorrow) and noted that this initiative, which is aimed at the development of science and modern technologies in Armenia, will keep in the focus of its attention artificial intelligence, mathematical modeling, digital data management, and some other areas. Noting that preliminary agreement on cooperation in the framework of this program has already been reached with a number of major global companies including IBM, Siemens, Thales, Dassault, Safran, Leonardo, as well as renowned universities and scientific centers, President Sarkissian said that would be happy to cooperate also with British companies, universities, and research centers.

President Armen Sarkissian spoke also about the STARMUS VI International Festival to be held in Armenia next year, and Armenian Summit of Minds and invited Under-Secretary Morton to participate in the mentioned events.