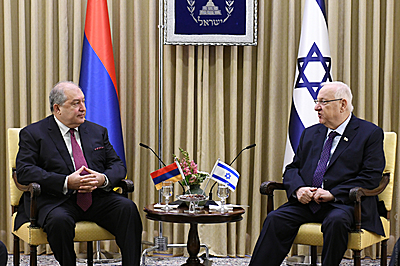 President Armen Sarkissian spoke today on the phone with the President of the State of Israel Reuven Rivlin.

At the beginning of the conversation, the two presidents discussed issues related to bilateral relations.

Then President Sarkissian presented the situation in Artsakh and border with Armenia resulting from the military aggression unleashed by Azerbaijan.

President Sarkissian noted that arms and equipment sold by Israel to Azerbaijan is used not only for defense, as the Israeli side assured in the past, but also for offensives. These weaponry is used actively to bomb the Armenian settlements and civilian population, causing multiple loss of life and massive destruction.

The President of Armenia noted that continued supplies of arms are unacceptable by any standard and underscored that it could seriously undermine the Armenian-Israeli relations. He urged the president of Israel to use his authority with the government to stop the supplies of arms to Azerbaijan immediately.

President Armen Sarkissian informed that the Armenian side has noted its concerns and observations also in the letter addressed to President Rivlin.

President Rivlin expressed readiness together with the government of his country to consider with the utmost seriousness the issues raised by the Armenian side.