The Armenian people are thankful to Russia and the President of the Russian Federation, especially for the support shown during these difficult days. President Sarkissian met with Sergey Lavrov 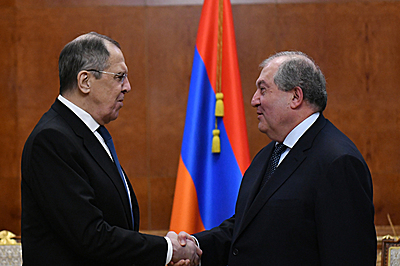 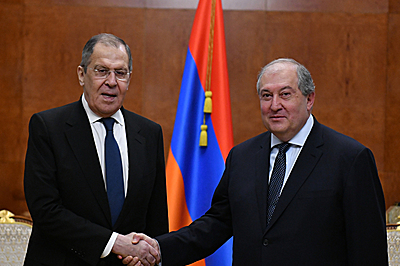 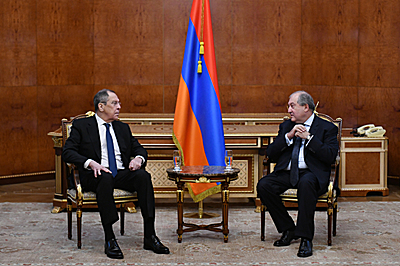 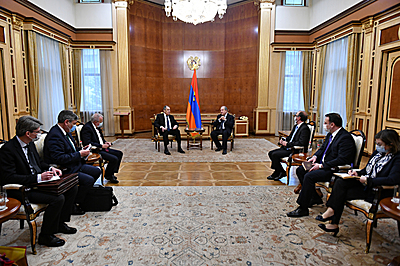 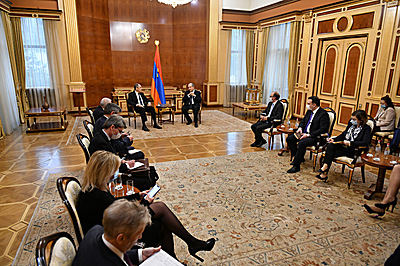 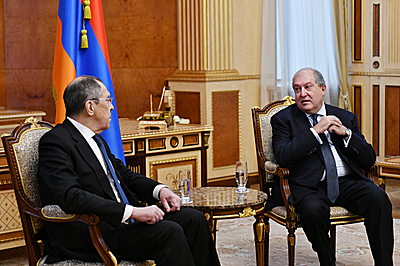 Today, the President of the Republic of Armenia Armen Sarkissian met with the Minister of Foreign Affairs of the Russian Federation Sergey Lavrov.

Greeting the RF Minister of Foreign Affairs and the representative delegation who arrived in Armenia with him, President Sarkissian said in particular, "You came to Armenia in а hard time, when it is in crisis. There are great challenges for our economy, a severe post-war situation; also psychological problems, coronavirus and many other issues. On the whole, it is tough in the sphere of foreign policy as well.”

President Sarkissian thanked the RF Minister of Foreign Affairs, first of all, for everything he has been doing for Armenia and the region during all these years. The President of Armenia asked to convey his own and our people’s gratitude to the President of the Russian Federation, especially for his support during these difficult days. "It does not matter where Armenians live, they know that if it were not for your efforts and those of Vladimir Vladimirovich, we would continue to lose young lives today, - said President Sarkissian. - In the first days of the war we knew that all the efforts of the leadership of the Russian Federation, personally the President, were aimed at stopping it. Once again, we became convinced that true friendship thrives in difficult times.”

The President of Armenia said that we have two problems today, which must be resolved consistently so that they do not turn into a greater problem. “Firstly, not only to carry out the cessation of hostilities according to the joint statement, but also continue in the subsequent years, - noted the President. - It is very important for Armenia, it is of vital significance. And secondly, an issue, which worries me a lot, is connected with the stability in our country. It is always possible to find solutions notwithstanding the difficulties and the situation of crisis. Our children, friends and foes will follow how Armenia emerges from this situation. If it comes out with dignity and united, then we can say that we are a strong nation.”

Expressing gratitude for the meeting, Russia’s Minister of Foreign Affairs Sergey Lavrov noted in his speech, “Today, the negotiations proceeding here allow us to consider all the spheres of our ties and agree on the matter how to deepen them, and how to make them more productive first and foremost for our citizens.

We are grateful, and President Putin asked me to pass his gratitude personally to you for the assessment made by you and the vast majority of Armenian politicians and ordinary citizens in connection with the joint statement of November 9, adopted by the Prime Minister of Armenia, and the Presidents of Azerbaijan and the Russian Federation. As you said, it permitted to stop the war. For the first time, after so many arrangements, the ceasefire really works, because there is a ceasefire monitoring mechanism. It is the agreement of Azerbaijan and Armenia, the implementation of peacekeeping operations; they are already carrying out their operations, both by ensuring the cessation of hostilities and by providing humanitarian support to the people of Nagorno-Karabakh. An interdepartmental centre for humanitarian response is being set up by Putin's order, which will help solve the humanitarian issues of the population in the quickest possible manner. We have actively involved international organizations in this issue: the Red Cross and the UN organizations have been working for a long time."

The President of the Republic and the RF Minister of Foreign Affairs also touched upon other issues on the agenda of the Armenian-Russian cooperation.