“Black and white are not our colours, the tricolour is ours.” President Armen Sarkissian met with representatives of youth organizations 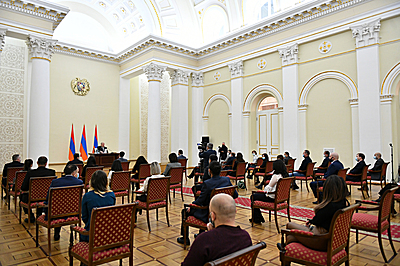 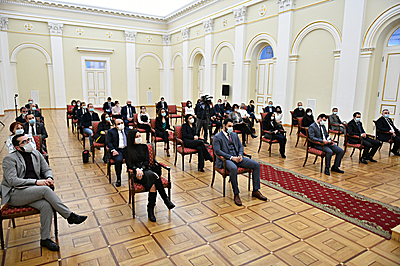 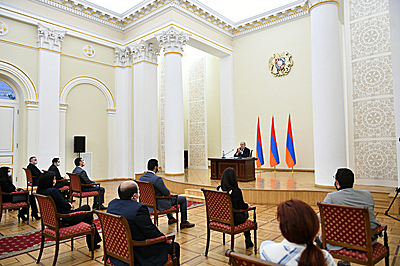 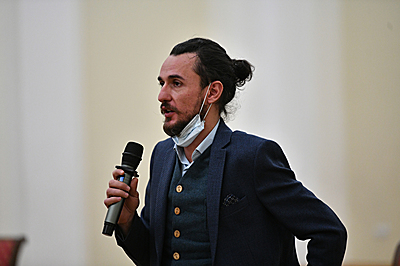 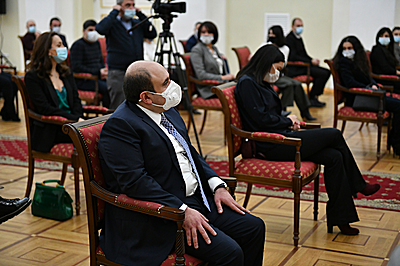 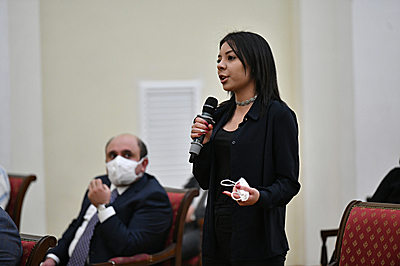 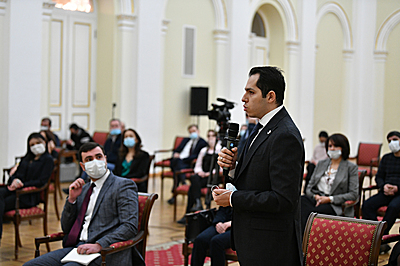 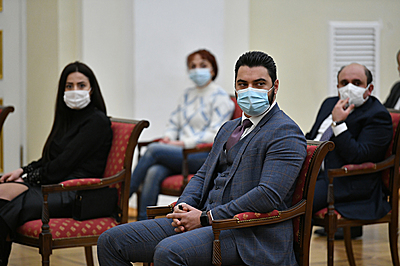 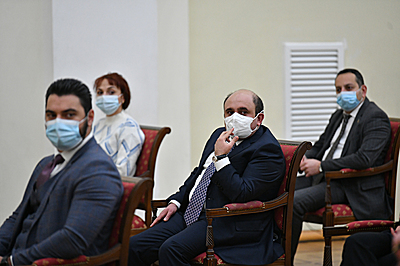 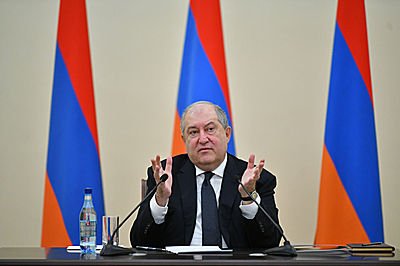 During the two-hour conversation, President Sarkissian and over forty participants of the meeting: young scientists, representatives of education and culture, business and public spheres, exchanged views on the situation in the country, presented their concerns and views, and discussed ways to resolve the current crisis.

“As a president and an individual, I have a lot of worries,” said President Sarkissian, addressing the youth. – “One of the worries is related to your generation because if you, being educated and developed, do not see your future in this country, there will be a painful outflow. You are really the future of this country. Today, all the talks about it are actually about you. They are not about what to do today or tomorrow, whom to elect or not, but about what to do for the country to have a future, and that future is you.”

The participants of the meeting asked various questions to the President of the Republic.

Answering the question on the demarcation of the borders, and GPS or similar methods used, President Sarkissian said that it is a very painful issue, the consequence of our defeat in the war, as well as the fact that many state institutions do not work, and demarcation does not happen by itself. "You talked about the method: GPS, Google map or relevant demarcation decisions of the Soviet Union… However, first of all we need people, professionals who understand what demarcation is. Secondly, security forces standing there as the state must be represented," said the President of the Republic, "Unfortunately, in many places both are absent. I have raised my voice on that occasion. I have no other opportunity; I cannot give an assignment to the relevant minister. Proceeding from the situation, as the head of the country, I have written a letter to RF President Vladimir Putin, asking him, as a signatory to the Statement, to support in the resolving of these problems. In that letter, I have also mentioned possible solutions. In the Soviet years, demarcation discussions and negotiations took place from 1984 till the end of 1988, in the result of which the Deputy Heads of the Governments of the two Soviet Republics signed a demarcation document. So, actually, this is a completed process…

We must have a negotiator to negotiate together with the security forces or separately. Otherwise this is a one-way street: they come, they decide, they place the pillars and go.

After such wars, there will be a huge number of lawsuits, where we must represent ourselves at a very high level, able to defend our state and national interests. However, the presence of our state on that border is a priority today. If there is no person representing the state on the border, it will not be possible to apply anything in that case."

One of the questions, asked by the participants, referred to the dialogue of different political forces and ideas. The suggestion was that the President of the Republic created a platform for that dialogue. "What you are saying is about a non-existent dialogue," said the President, "A dialogue between the authorities, the government and the opposition. We all know how this society has divided into blacks and whites during these two and a half years. I did not invent the term. I like it or not, I use it because it exists. We have a very strange situation - blacks and whites. One cannot simplify people's ideas and ideology this much. Black and white are not our colours; the tricolour is ours… We need not only a dialogue. There is a need that the political circles responsible for the future of the country today talked to each other. That is why, after the first days the war ended, when I expressed my attitude and proposed a solution, I began to meet with political circles. My task is the following: to see if there are any common points for a dialogue? Unfortunately, I see that these points are very few. The tricolour Armenia is absent there; it is missing in those conversations. I suggested that this institute become a place where the parties come and talk to each other. I am in favour of the majority speaking, that is why I suggested that the Government should resign, after which a new government should form: a government of national accord. Everyone in that government must be a professional; no one should represent any party or party ideology. It must be short-term and have a clear program. It must enable all political forces to prepare for the elections to be held in a year, and enable the tricolour Armenia to give birth to new parties, new groups, and new individuals. Your choice today is between black and white, but in reality it does not happen so.

One should not wait for a saviour to come. There should not be a savior; we should all agree on one principle, vision, and program. That saviour must be the state, statehood and state institutions, so that the ministry is not identified with the individual, and the prime minister with the government. We must have institutions to work. Many of them do not work in our country, they have not been successful as such for thirty years.” In this context, the President noted the need for a strong leader. “A strong leader is the one who is not afraid of people stronger than him. Strong leaders must be people who not only show the way, and are good managers, but also take responsibility, and at any moment are ready to answer for every mistake made,” said President Sarkissian, “I will do my best so that the existing political forces try to talk to each other and not oppose in the street. If there is an election tomorrow, that opposition will move to the polls. The country should not be taken to civil collisions. The tricolour Armenia should start talking.” Addressing the youth, the President said: “My first message to you is to start talking: you know where to take the country. With your education and position, you are ready to listen, to perceive and at the same time, to participate in the formation of such a path. For the next thirty years, you will be responsible for this country. The time has come for you to decide where the country should go. I am ready to support you in all your initiatives, but know that there will be no saviour. Neither am I a saviour, nor anyone else. But I am ready to guide you, to cooperate with you, advise, and support you for you to take the future of this country in your hands, not just to sit and wait for someone to lead this country instead of you. I am ready to support you in everything. You are the future of this country, not me.”

After the signing of the trilateral document, day by day, we see the protests of the citizens demanding the resignation of the Prime Minister heat up; we see the disproportionate application of force and very often brute force by the police. What is the President's point of view? How does the President comment on the fact that being in favour of the Government's resignation, he continues to sign the documents submitted by the Prime Minister? In response to these questions, President Sarkissian particularly said: “Such cases happen every day: someone is pushed, or rudely treated. Imagine if the President talks about this every day. I will definitely speak when it becomes unacceptable, or unforgivable. In 2018, I went to the Square because I felt the danger of a huge collision. I met Nikol Pashinyan for the first time in that square. I went down to the Square so that there would be no clash. I must use the few tools I have very effectively, to speak when it is really impossible not to speak. When I talk about a dialogue, I mean let the sharpest street talk move to this building. I started with the Prime Minister. I met with everyone, and I came again to meet with the Prime Minister; after that I met with the leaders of the opposition again.

The Electoral Code needs to be changed. We also need to change the Constitution. To change does not mean to go from presidential to parliamentary, from parliamentary to presidential. Both can be great, and both can be bad if there are not the simple logical tools called mechanisms of balance and restraint.

Now, about the laws. They bring me a law, e.g. on the budget by which people should be paid, or laws that contain corrections. If you do not correct this mistake, people will not get a pension somewhere. Now, I can declare that since I have said the Government will resign, I will not sign these laws. This is called inaction of the President. Moreover, if I do not sign, the NA Speaker will sign it within three days, and it will become a law. This is called cheap populism. The President must keep his feelings at home when he comes to the institution; he must work with logic and cold calculation. One thing that this institution and the President must constantly avoid is populism. Even in times of crisis, the President must sign the laws that the state needs for our activities today. I will not be a populist.”

As the President says: “We need to revalue the traversed path; to do this, we need auditing in all spheres: from state-building to the army, sports, and culture, and first of all, education and science. Because in the 21st century, "agriculture", "tourism", and "e-industry" will be digital; everything will depend on how effectively you can manage.

“Armenia must become a country of quality; what we produce must be of the highest quality; we must make the best use of our advantage and the greatest resource: the human potential.”

As for tomorrow, the President emphasized: “The 21st century is a century of new technologies, and it depends on us what kind of a state we want to have... People today will start wishing the simplest thing; they will get tired of political debates, political statements, and Facebook gossip; they will wish the most basic things: bread, home, education for children and confidence that these children have a future. And for that we need solutions. There must be stability in the country. It is time for us to believe in real values​​and think about them. Let us look into the eyes of the truth, no matter how pleasant or unpleasant that truth may be, but that is the way. We must look into the eyes of the truth, see where we are, rise to our feet and move forward together.”