A man who was a unique example of patriotism. President Armen Sarkissian expressed his condolences on the death of Hirair Hovnanian 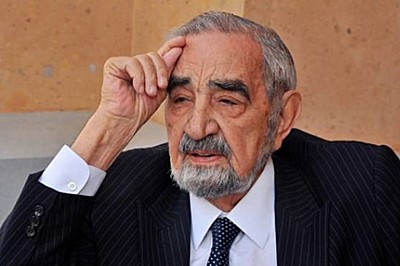 Armen Sarkissian sent a message of condolences on the death of Hirair Hovnanian.

"Armenia and the Armenian people lost one of their best sons. Famous American-Armenian benefactor, public figure, and businessman Hirair Hovnanian passed away.

He was a unique example of patriotism, a man for whom Armenia was not a Homeland of ordinary feelings but a target of his sincere devotion and faithfulness; he dedicated himself to the service of his Homeland until the end of his life, in the broadest sense of the word.

Hirair Hovnanian participated in most various programs for his Homeland, developing Armenia and Artsakh, both as an individual and as a member of the Board of Trustees of the Hayastan All-Armenian Fund, and certainly as one of the founders of the Armenian Assembly of America, the Co-President of its Board of Trustees of many years and later, its Honorary President.

I was lucky to know Hirair Hovnanian and his family. The way he spoke and thought about Armenia, the way he used his potential and resources for the benefit of Armenia and Artsakh, one has yet to be able and strive like him.

He was a man faithful to his nationality and origin, to his memory about the historical Homeland, and to the plans for the future of his Homeland. He was loyal in his essence, and character, in his work and life. He passed his faithfulness to his family and children...

My sincere condolences and words of sympathy to the Hovnanian family, their friends and relatives."