Armenian-Russian relations should develop on the basis of the "mission for two" formula. Interview of President Armen Sarkissian to Sputnik Armenia 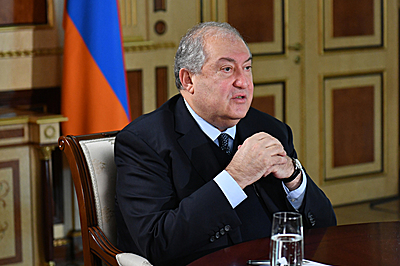 The President of the Republic Armen Sarkissian gave an interview to the Russian "Sputnik" agency.

Sputnik Armenia - The authorities in Armenia have announced the need to implement another constitutional reform. According to them, a referendum should be held in autumn to return to the semi-presidential form of governing. How do you feel about that initiative?

- Any initiative aimed at systemic changes can only be welcomed. I have said for many times that the current Constitution, written in 2015, does not allow us to establish a balanced system of government. The lion's share of power belongs to the executive branch, represented by the prime minister, while other institutions lack serious mechanisms of checks and balances. Whereas real democracy is not the power of the majority or the minority, but the balanced system of power, which must manage the national potential correctly and effectively.

As for returning to the semi-presidential version of governing, it is necessary to emphasize the following: the important thing is not in the form, but the content it will have. The current form of government is also not so bad in its official features, and it sounds very inspiring: a parliamentary republic. But when we start analyzing its structure, it turns out that it is far from parliamentarism. The current Constitution is a vivid proof of that. So, when it is about the content of reforms, I support them, and if it is just changing the order of addends, then, as you know, it does not change the sum.

Sputnik Armenia - Parliamentary elections are scheduled for June. The referendum on the constitutional reform proposed by the authorities is expected in autumn. Don’t you think that in this case the sequence is illogical? If there is a need for changes in the Constitution and the Electoral Code in the country, then what is the meaning of the elections in June?

- Every political process has its logic. In this case, the sequence in which systemic reforms are carried out, which requires significant, qualitative-quantitative resources, is logical. Only as a result of these reforms, including the amendment of the Constitution, it is possible to hold elections that will be substantive. Otherwise, we shall have a situation where elections are held for the sake of elections. I do not see any tools here to get the country out of the political, economic, social, and most importantly, moral-psychological crisis. Meanwhile, this is our task - to "launch" the state and the people in a new way. And all our actions, I think, should be aimed at that.

Sputnik Armenia - Regardless of the election results, the new or old Cabinet of Ministers needs to address the overdue issues that predetermined the dividing line of the Armenian elite. Can you list the three priority issues that need to be addressed immediately and radically?

- The main task is to restore the viability of the state and the formation of a road map, which will allow starting the substantive process of national and state-building. This may seem vague to you, but the reality is that separate problems always arise and will continue to appear when fundamental problems remain unresolved. That's why we live from "fire to fire"; we are always thinking about why fires happen and how to put them out. Such a philosophy of existence today is destructive, it leads to the abyss; it is necessary to move from a survival mode to a preventive creative regime. This means that Armenia must be able to predict

Sputnik Armenia - The autumn war dramatically changed the situation around Karabakh. But, in fact, globally, the conflict with Baku has not been resolved. The NKR remains unrecognized. There are occupied territories and enclaves in the north and in the south. Will the current, new or renewed authorities solve these problems one day?

- I have said many times that the final solution to this conflict is possible only after analyzing its main causes and overcoming their consequences. And those reasons are multi-layered. The fact is that the immature and short-sighted national-geographical policies of the early Soviet leadership created a ticking-time bomb. It exploded in the late 1980s and led to the ethnic cleansing of the Armenian population and a bloody war. It is important to understand that the war was not the choice of the Armenian side; it was imposed by the military-political leadership of Azerbaijan and Turkey.

Independence was not a simple wish of the Armenians of Artsakh either: on the one hand, it became an indisputable tool of survival, and on the other hand, a guarantee deterring the potential Azerbaijani aggression. How can real settlement models be found without considering these essential issues? By the way, the President of the Russian Federation Vladimir Putin announced this as well, emphasizing the importance of paying attention to the historical peculiarities, including the Armenian Genocide of 1915.

Sputnik Armenia - You are one of the first figures of the Armenian state, the most experienced politician, who is known and respected in Russia. In your opinion, what is missing in the Armenian-Russian bilateral relations today?

- I think that the Armenian-Russian relations should develop on the basis of the "mission for two" formula. For example, the first mission, in my opinion, is to create conditions for strengthening peace and stability in our region, in Greater Eurasia, and all over the world.

The Armenian and Russian peoples have gone through many historical trials, including the two world wars; this is why they are most interested in building a new system of international relations that will be able to adequately respond to impending challenges and threats.

Russia is a big nuclear power with a statehood of ancient traditions. Armenia is a small country with a huge potential. It is about the Diaspora, which is very well integrated in the public and political life of many countries of the world, from Moscow, San Francisco to Canberra ... Moreover, the world is entering an era when networking states will come to the fore, and Armenia has all the opportunities to become one.

In its turn, Russia must decide what kind of Armenia it wants to see. The first is a weak, extremely dependent country, where there is a constant struggle for influence within narrow groups, liberals, nationalists, radicals, and populists, seeking their big brother's favour. The second is a strong Armenia, which uses all its resources and potential to strengthen its prestige and its ally, to advance its interests. But it is fair only if both perceive the protection of their ally’s interests as their own. And also, when those relationships are based on trust and predictability.