An indefatigable clergyman, scientist, pedagogue, and artist, he was strongly linked to his Homeland in spirit and mind. President Armen Sarkissian expressed condolences on the death of Father Harutyun Vardapet Pztikyan 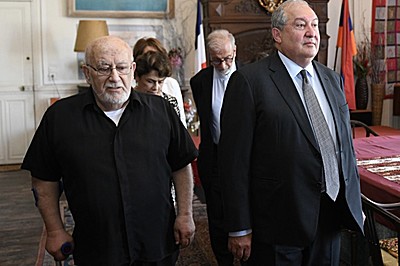 The President of the Republic Armen Sarkissian sent a message of condolences on the death of Father Harutyun Pztikyan, a member of the Mekhitarist Congregation of Venice, which reads:

"Father Harutyun was one of the most famous names in the Armenian reality, owing to his busy life and fruitful activities. A son of Musaler parents, born in Beirut in 1937, he connected his life with the Mekhitarist Congregation in Venice since 1950. The bright and talented alumnus of the Congregation received a comprehensive education in Rome and Venice. Besides philosophy, theology, and spiritual music, he was keen on painting.

For long years, he taught at Mekhitarist colleges around the world. Father Harutyun was particularly associated with the Samuel-Murad School in Sèvres near Paris, where he taught for many years, and in the last years of his life, when the school was no longer functioning, he became the overseer of that historical institution, and the permanent guardian of the Mekhitarist heritage.

An indefatigable clergyman, scientist, pedagogue, and artist, he was strongly linked to his Homeland in spirit and mind. He travelled all over the Armenian world, wrote down notes, described and photographed our monasteries, churches, and historical monuments one by one. Dozens of Armenological studies, travel notes, and reviews, dedicated to the history and culture of the Armenian people, also compassionate and sharp observations on our new reality have come out from under his prolific pen.

Especially in the last thirty years, Father Harutyun often visited Armenia, where he was appreciated and loved, and often appeared in debates, lectured, and exhibited his paintings.

Having known and met with this multi-talented and life-loving man for many years, I have the greatest respect and sympathy for him and his devotion to our spiritual and cultural life.

On the irreparable loss of Father Harutyun Vardapet Pztikian, I express my deep condolences to the Mekhitarist Congregation, the Mekhitarist alumni, his relatives, and friends."