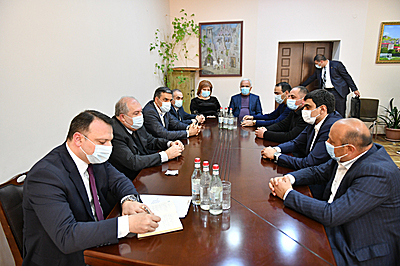 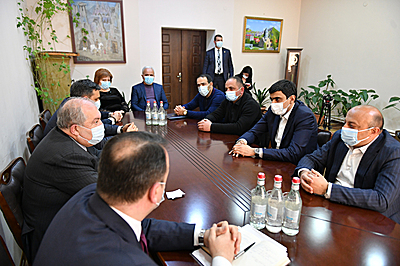 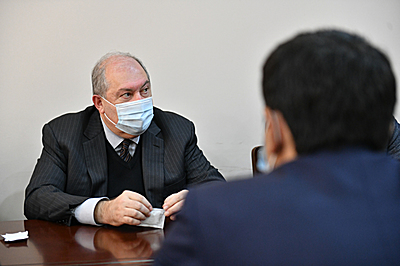 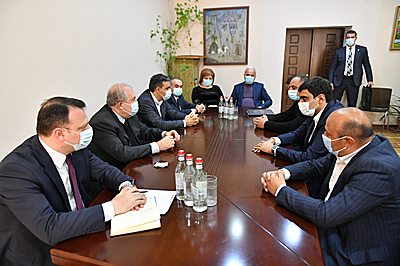 Within the framework of his working visit to Syunik marz, the President of the Republic Armen Sarkissian, and Armenia’s Human Rights Defender Arman Tatoyan visited Goris Municipality, where they met with the leader of Goris community Arush Arushanyan, the leader of Sissian community Arthur Sargsyan, also Yervand Malunts, Armen Khachatryan, and Lusiné Avetyan, the heads of settlements Khndzoresk, Hartashen and Karahunj, part of the enlarged community of Goris.

President Sarkissian noted that the visit to Syunik was to take place long ago, but the coronavirus infection made him postpone it. "Today, I came first to see with my eyes what I hear, to hear personally you speak about your problems, and figure out how I can help you," said the President.

The community leaders informed the President about the situation and problems after the war, singling out the issues of security and demarcation as having special priority. It was also noted that the inhabitants of the border communities of the region, whose main occupation is cattle breeding, are currently deprived of the opportunity to use pastures, even some of their privately owned lands, as they are under Azerbaijani control. This complicates the already difficult socio-economic situation.

Among the problems, people mentioned unemployment, particularly in the sphere of tourism in Goris, and the problems related to infrastructures.

The possibilities of the President's institution to support in resolving the problems were also discussed at the meeting.

Answering the questions raised, referring to the presented problems, President Sarkissian noted that he would try to support their solution as much as possible within the powers of the President’s institution.