All people feel their pain, but it is profound and human to feel and share the pain of others. The message of gratitude of the President of the Republic Armen Sarkissian 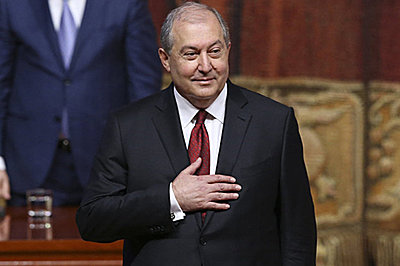 Dear compatriots of Armenia, Artsakh and the Diaspora,

Dear friends of Armenia and the Armenian people,

On April 24, we paid tribute to the memory of Armenians massacred in the Ottoman Empire more than one hundred years ago: loudly and in a whisper, mentally and in a variety of voices, in Armenian and English, French and Russian, Greek, Arabic, and Hebrew.

The 106th anniversary of the Armenian Genocide proved once again that all people feel their pain, but it is profound and human to feel and share the pain of others; moreover, to have the courage to speak out about it.

Leaders of many countries, governments, and parliaments, public, cultural, scientific, and academic circles, international organizations have already recognized and condemned the Armenian Genocide of 1915. On behalf of my country, Armenia, my people, and myself, I would like to express my thankfulness and gratitude to all of them, to all the peoples who are heartfelt to us.

The international recognition of the Armenian Genocide received a weighty and courageous incentive by April 24 Statement of the US President Joe Biden, whose speech, in fact, reaffirmed the recognition and condemnation of the Armenian Genocide by both chambers of the US Congress two years ago, in 2019. I want to thank the US President and his team once again for being by our side and committed to his election campaign promise.

I am thankful to all our compatriots in the Diaspora, especially Armenian-Americans and the Armenian structures and organizations in the USA, including the Armenian National Committee, the Armenian Assembly of America, the ARF, the ADL and the SDHP, all our churches, the AGBU, all those individuals and national public figures who were unbreakable in their struggle, a struggle that is to be continued yet.

I am grateful to the generations of my compatriots who survived the Armenian Genocide, whose integral part of lives is not only the constant memory of the lost homeland and martyred ancestors but also the just struggle and unquenchable demand, and of course, the belief that the haven of justice is quite near.

I am grateful to all my compatriots in Armenia and Artsakh, state, political and public figures, political forces and non-governmental organizations, intellectuals, all citizens of Armenia: WE REMEMBER AND DEMAND. This proves that in case we are united and organized, we will achieve results.

Pain brings us together, but we must unite first of all in the name of success, as well as in the name of security and interests. National unity and mutual understanding, solidarity and tolerance are the best way to achieve success.

Each step in condemning and recognizing the Armenian Genocide is a unique signal and warning to all those who are still striving to regulate relations and achieve their goals through force and human rights abuse. Yesterday, it was the Ottoman Empire; today, it is its heir modern Turkey and its "little brother" Azerbaijan. Genocides have no statute of limitations ...

I am confident that our path to a free and independent life is continuous because we can and will overcome the obstacles and challenges along the way, and we will do this with the support of our friends.