Armenia expects support from international partners in the issue of immediate return of all prisoners of war. President Armen Sarkissian sent letters to the Secretaries General of the CE and OSCE 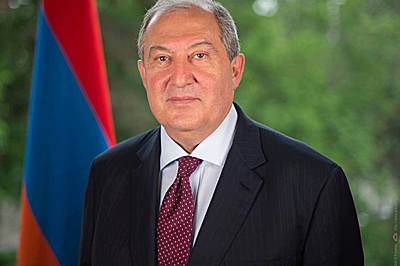 Continuing to draw the international partners’ attention to the urgent issue of Armenian prisoners of war and civilians being held in Azerbaijan, President of the Republic of Armenia Armen Sarkissian sent letters to Maria Pejkinovich Buric, the Secretary General of the Council of Europe, and Helga Maria Schmid, the Secretary General of the Organization for Security and Cooperation in Europe, emphasizing that Armenia expects support from international partners in the issue of the immediate return of all Armenian prisoners of war and civilians detained by Azerbaijan.

Stressing that 2020 was a troublesome year for Armenia not only because of Covid-19 but also much harder due to the war unleashed by Azerbaijan against Artsakh on September 27, and carried out with the active support and direct participation of Turkey. President Sarkissian noted:

"Despite the repeated calls from the international community for immediately stopping the war, the military-political leadership of Azerbaijan had been deliberately targeting civilians and infrastructures en masse, in gross violation of human rights and norms of the international humanitarian law.

This resulted in the loss of thousands of young lives, disability of thousands young people, displacement of population, and destruction of the Armenian historical and cultural heritage.

During and after the war, Armenian servicemen and civilians were taken prisoner, tortured and inhumanly treated by Azerbaijan."

Stressing that the humanitarian situation in Artsakh is a priority today and requires the urgent attention of the international community, the President of Armenia considers it exceedingly imperative to return all the prisoners of war and civilians by principle “all for all,” which is ignored by Azerbaijan.

At present, Azerbaijan continues to reject and obstacle the return of hostages, and prisoners of war, in gross violation of human rights and international humanitarian law.

In this context, President Sarkissian pointed out the work and the fact-finding activity carried out by the Human Rights Defender of Armenia, who constantly raises the concerns and existing problems of the Armenian side in international instances.

Noting that Armenia expects international partners’ support in the immediate return of all prisoners of war, the Armenian President appealed to the Secretary General of the CE and the CE and the Secretary-General of the OSCE and the OSCE to take all necessary measures in accordance with international humanitarian law for the immediate release of the prisoners of war and civilians, and ensure their safe return.