We must work hard together for the sake of the Motherland that our compatriots, genocide victims, in the Ottoman Empire had dreamed of as well. President Sarkissian sent a message of gratitude to the co-founders of the Aurora Initiative 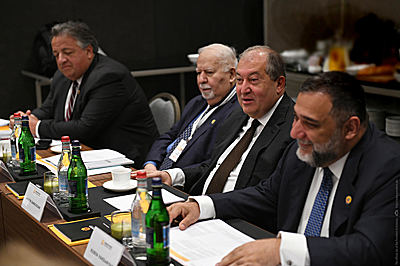 President Armen Sarkissian sent a message of gratitude to Noubar Afeyan and Ruben Vardanyan, co-founders of the Aurora Humanitarian Initiative, for their efforts in the international recognition of the Armenian Genocide.

"On April 24 Remembrance Day, commemorating the victims of the Armenian Genocide, the Aurora Humanitarian Initiative heroes of the year were announced.

For the first time since its inception, the Aurora Awards were held without one of its godfathers, our senior friend Vartan Gregorian, co-founder of the Aurora Initiative and member of the Aurora Prize Selection Committee, who passed away a few days ago.

Expressing my deepest pain on the loss of Vartan Gregorian once again, I would like to thank all the founders of the Aurora Initiative for their participation in the struggle to recognize the Armenian Genocide. The contribution of our beloved Vartan Gregorian in that case is undeniable.

He was a prominent philanthropist, scientist, researcher, and consultant at the national and international levels and played a pivotal role in preserving the Armenian identity and representing Armenians, raising the issue of the just cause and making it public.

I am sure that you will continue the work you started with Vartan Gregorian in the same vigour, in memory of our great compatriot, his contribution, his struggle and deeply national activity, and of course, for the goals he did not manage to complete.”