You must be one of those people who must take part in building a new Armenia. President Armen Sarkissian hosted a group of servicemen, injured in the war and currently receiving medical treatment, and their relatives 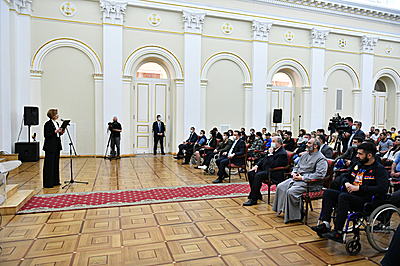 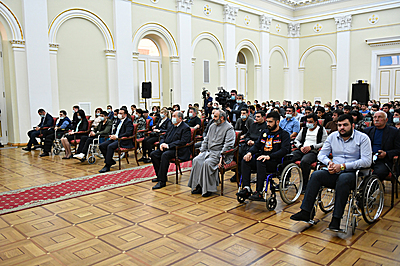 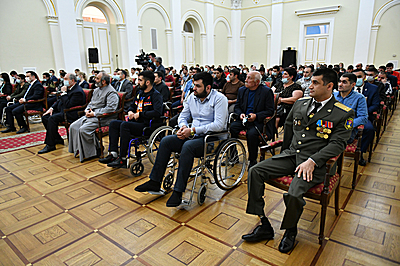 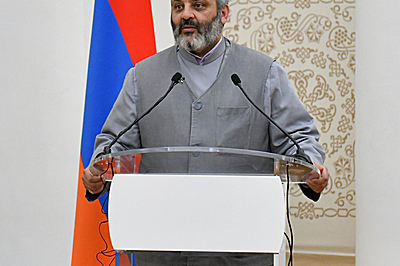 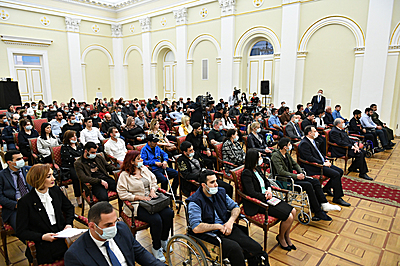 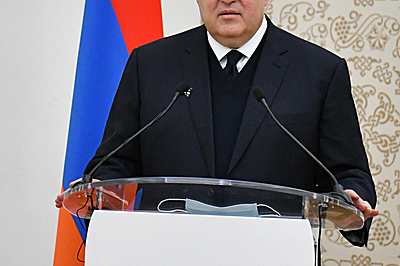 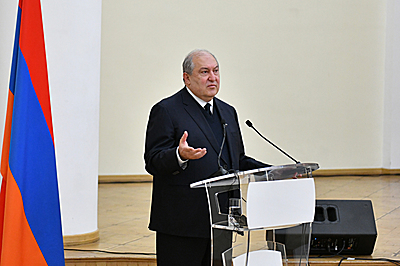 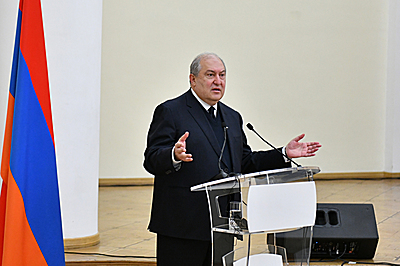 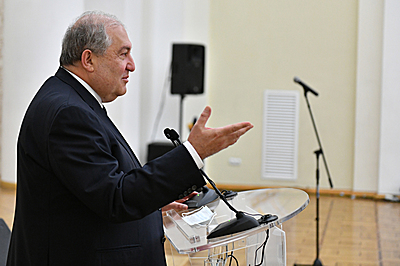 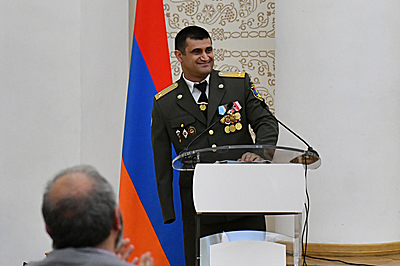 The event, aimed at providing psychological support to the servicemen, who took part in the war and got injured, in terms of recovery, adaptation to normal life, as well as training and work, was initiated by the President of the Republic within the framework of the "Fatherland Defender" program.

Welcoming the initiative, the Primate of the Tavush Diocese of the Armenian Apostolic Church, Bishop Bagrat Galstanyan, particularly noted: "Our guys, our dear brothers and sons, who fought and were severely, even incurably, injured during the war, those who managed to stand on their feet, returned to the front because they found their dignity and recovery there, next to their brothers.

Therefore, the largest field of recovery for a soldier is the battlefield. The rest depends on our care, love, support, and proper attitude. Today, I want to say that we are the same as before: we have the same views, aims, vision and victory. We must have a life focused on the vision of society through the path of care and attention, love and mission, through the path of the cross. I strongly believe that this initiative is also aimed at supporting, first of all, and then developing all the half-abandoned personal and collective abilities and achievements that we are trying to live with today.

May God bless this mission, and we will quite soon see not only our beloved brothers and their families healed spiritually, physically, and mentally, but our entire nation.”

In his speech, the President of the Republic Armen Sarkissian particularly said. "I am happy to see you all here. We all need to see each other often, talk, tell stories, and move on with our lives, no matter how difficult it may be after one and a half months of last autumn.

Many of you have gone through hell in a sense because war is hell. Today, no one can and has any right to evaluate your past. History must make this assessment.

You must be aware that there is an Akhbyur Serob in you all, and you have passed the same path as General Andranik. You must realize that you and your fallen friends are the foundation and pillars on which this state stands. You must realize that the hard path you have taken must be shared with others. As I said, war is hell, but people need to know what difficult conditions you went through defending your homeland. I want to assure you that your names, and those of your lost friends, will be written in golden letters in the history book of future victories ...

If it were not for the war, I would have met you, 20-year-old boys and girls, we would have talked about the future: what kind of education you should get, what kind of future you should have, how we should strengthen our country and move forward. But speaking to you today, I am not talking to 20-year-old boys or girls, but to people who have life experience, probably of forty years and more. In a month and a half, you have passed a long way of 15-20 years; therefore, you are much wiser and more experienced, you have a lot to share with others. You all have a life story.

I see that many of you have suffered severe injuries and wounds, both physical and psychological. Somewhere, it is harder to heal the psychological traumas than the physical ones because it is not only yours, it is the wounded souls of your family members. But I want to assure you as someone who is not only the President of the Republic but also has come a long way, and has seen the first war, there is life after the war, even after death. You have your whole life ahead of you! You are only twenty years old.

The goal of us all must be the same: to strengthen this state, also to rebuild it in a way, to restore the state in the sense of the material, army, economy, science, and technologies. You are those witnesses who know well that science and technology will win in today's and tomorrow's wars. You must be one of those people who must take part in building a new Armenia.

As I speak to you and about you, I think of the thousands of boys and girls, men and women who are not with us today. Please remember our lost sisters and brothers, sons and daughters, with a silent prayer ...

No matter how hard your situation is, and no matter how many times more tragic the situation of the families, mothers and fathers who lost their children is, this is not the end of the story today. We have people who are still in captivity; their return is an absolute necessity. Their life is of immense value. We must do our best to bring them back. As President, I do what I can, using personal connections, also writing to the Secretary General of the United Nations, the leadership of the Council of Europe, the Red Cross, and everyone. Unfortunately, the solution is not in the hands of the UN Secretary General, nor in the hands of the Red Cross; the final solution is beyond the border. The most inhumane decisions are made there: to keep living people hostage in exchange for something. However, raising our voice, and putting pressure on the international community by the President of the Republic is an absolute necessity. I hope and pray that we will finally reach the day when our boys and girls will return. I cannot fail to mention, think, and share with you my concerns about the families whose sons are missing, who do not know what happened to their sons, and who live on the border of hell and heaven. My thoughts and prayers, and my work are also with them to bring clarity in their lives as soon as possible. The Office of the President works with the government, international structures, and the Human Rights Defender. These issues must be resolved and urgently.

As I said, there is life even after death. I want a person to stand next to me; I will not tell you his name, as you all know him very well. Mr. Lieutenant Colonel (Sargis Stepanyan) is the man who proved with his life that there is life after death. We met some time ago, when I happily and proudly shared with them the great joy of victory, because our sons, people who have physical difficulties for one reason or another, had returned from the World Cup in glory. I am speaking about five or six medals, but each life story is a story of victory ...

Guys, your second life is just beginning. You have lived one life because going to war means a whole life. You have passed it, and a new life begins. I want you to believe, and start a new life tomorrow and fight for new victories because I see in you future doctors, lawyers, and politicians. Do not despair at all.

Life and the world are open to you. Never try to participate or initiate something that will divide you: one will be given a name, the other - some other, one will be given one colour, the other - a different one. We do not have colours; we have a tricolour. We are so rich in human colours that it makes no sense to talk about one colour. There is only one thing: we are all together.

The President's Office and all our partners are ready to do their best for you to find a place in life. I see in your faces the silent but powerful determination of energetic young men who already know life.

The President's Office implements the "Fatherland Defender" program, which aims not only to bring you together but also to solve specific problems. We have a program that teaches young people, who have passed your way, a new profession. We are ready to work together with you.

First of all, I wish you all health of body and soul. I wish you all to find your happiness, the profession you love, to achieve great success, to become a champion, to continue the struggle, and to continue to serve our great homeland, to which you have given your whole soul and person, and many of your friends their lives.

We bow to their memory and wish every one of you future victories. Their memory will always remain alive only with our future achievements, the creators of which should be you.”

Within the framework of the event, Sargis Stepanyan, Lieutenant Colonel of the RA Armed Forces, President of the RA Federation of Disabled Sports, who won the World Arm Wrestling Championship three times, psychotherapist David Gevorgyan, Director of YSU Centre for Applied Psychology, and representatives of the Office of the President of the Republic talked to the participants and told them about their experience.

During the event, separate group discussions took place, during which the specialists listened to the participants' views and problems, and suggested their solutions.