The deepening of Armenian-Iranian relations has become extremely important under the difficult conditions created in the region. President Armen Sarkissian hosted the Minister of Foreign Affairs of the Islamic Republic of Iran 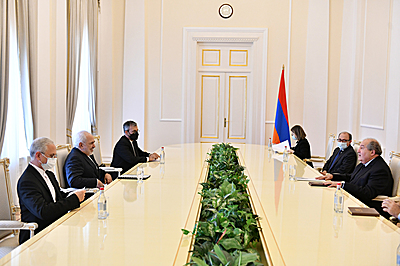 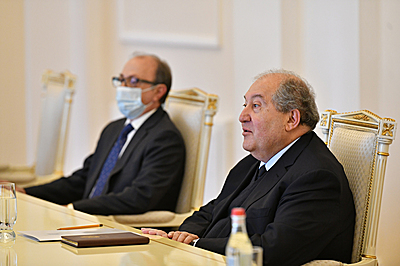 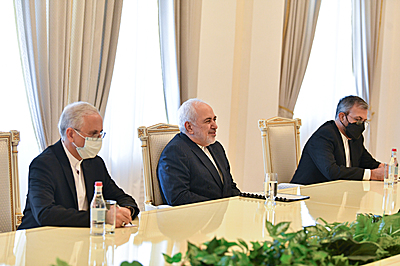 Today, Armen Sarkissian the President of the Republic of Armenia, hosted Mohammad Javad Zarif, the Minister of Foreign Affairs of the Islamic Republic of Iran, and the delegation he headed.

President Sarkissian welcomed the visit of the Foreign Minister of friendly Iran and emphasized that Armenia considers Iran a reliable partner and a friendly neighbour. According to him, under the complex situation in the region, further development and deepening of the relations between Armenia and Iran have become extremely important.

President Sarkissian also referred to the fact that the Azerbaijani army invaded the territory of Armenia and to the border situation, noting that Azerbaijan poses a new threat to the entire region through its provocative actions.

Expressing gratitude for the reception, Mohammad Javad Zarif conveyed to President Sarkissian the warm greetings of Hassan Rouhani, the President of the Islamic Republic of Iran. He noted that Armenia has always been a good friend of Iran, and the relations between the peoples of the two countries go back to the depths of ages. Foreign Minister Mohammad Zarif stressed that Iran is committed to peace and stability in the region and is ready to make possible efforts in that direction. At the same time, he stressed his country's interest in fully preserving and ensuring the territorial integrity of Armenia, noting that the Islamic Republic of Iran respects the norms of international law.

The President of the Republic and the Foreign Minister of Iran also touched upon the Armenian-Iranian bilateral agenda. The interlocutors agreed that the new challenges facing the region oblige to work at expanding the agenda of bilateral political and economic relations. Noting that Iran and Armenia have much greater potential for cooperation than they actually use, they attached importance to continuously developing mutually beneficial cooperation within the framework of various joint programs.