Armenia values ​​the support and solidarity of President Emanuel Macron and the people of France. The newly appointed Ambassador of France presented her credentials to President Armen Sarkissian 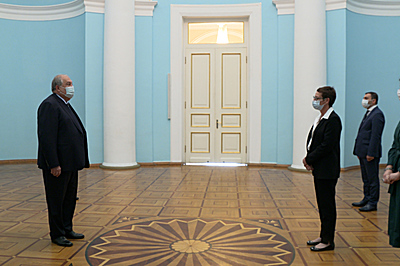 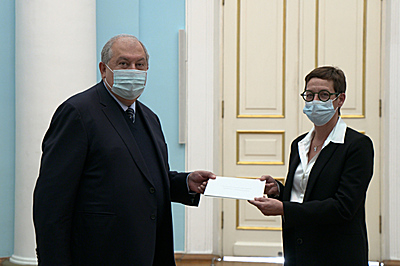 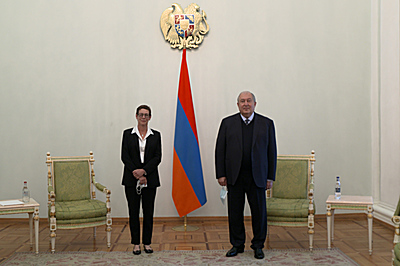 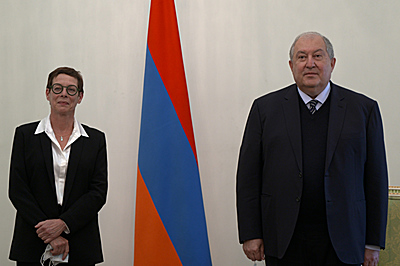 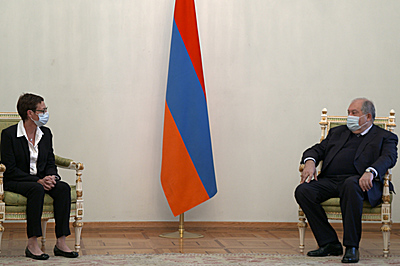 Today, the newly appointed Ambassador Extraordinary and Plenipotentiary of the French Republic to the Republic of Armenia Anne Louyot presented her credentials to the President of the Republic Armen Sarkissian.

"I am glad to represent France in a country, with which my country has a special relationship. I will do my best to further develop bilateral ties," said the newly appointed Ambassador, conveying the warm greetings of French President Emmanuel Macron to President Sarkissian.

The President congratulated the Ambassador on assuming her post, wished her success, and expressed hope that through mutual efforts, new ideas and initiatives will enrich the already comprehensive Armenian-French agenda.

As President Sarkissian said, the centuries-old friendship between Armenia and France, the special relations between our states, the high-level political dialogue, and mutual trust are a serious ground for further developing the Armenian-French cooperation.

The President of the Republic said that Armenia values​​the support and solidarity of the President of France Emmanuel Macron and the people of France during the most difficult days for our country.

The interlocutors touched upon different spheres of Armenian-French cooperation. President Sarkissian viewed the partnership in the newest technologies as perspective. He presented the Presidential Initiative ATOM (Advanced Tomorrow), which, as a future-oriented program, will focus on the country's scientific, technological, and educational development. There are already preliminary agreements on cooperation with several major French technology companies. "Armenia can build the locomotives of the future with the support of France, they are technological locomotives," said the President.

They also spoke about implementing ambitious programs, to expand cooperation in education, culture, and healthcare, through which, as the Ambassador noted, the French side is ready to invest its experience in Armenia.