President of Armenia Armen Sarkissian received Sigillum Magnum, the highest medal of the University of Bologna 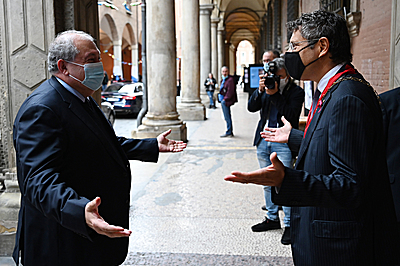 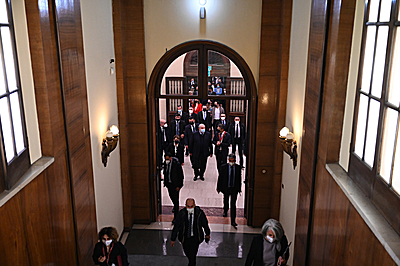 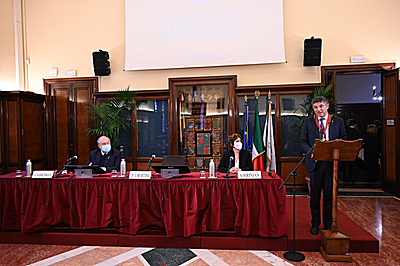 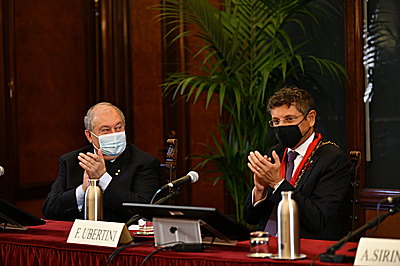 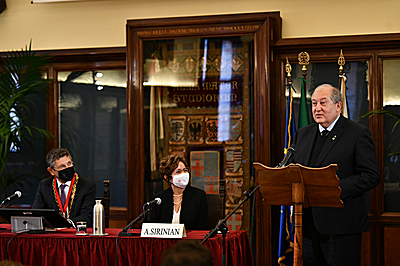 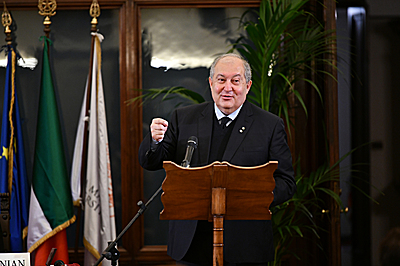 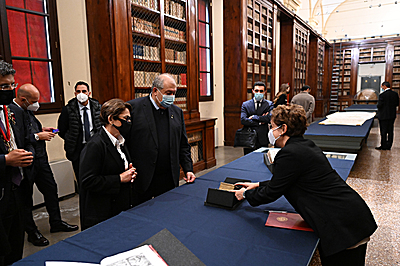 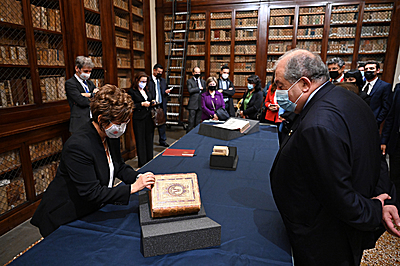 On October 8, the President of the Republic of Armenia Armen Sarkissian and his wife Nouneh Sarkissian, on a state visit in Italy, visited Bologna, the capital of the Emilia-Romagna region of Northern Italy, and the University of Bologna.

Founded in the 11th century, this educational centre in Bologna is the oldest permanently functioning university in Europe and has a significant influence not only in Italy but also throughout Europe. According to the accepted viewpoint, only here, it was possible to deeply study Roman law. The University is currently ranked among the best educational institutions in the world: it has ten research-training centres, about 88 thousand students, and 2800 researchers.

Today, the ceremony of awarding the President of Armenia with the highest medal of the educational centre "Sigillum Magnum" took place at the University of Bologna.

Welcoming the President of Armenia on behalf of the Alma Mater Studiorum University of Bologna, Rector of the University, Professor Francesco Ubertini particularly noted: "Our university welcomes you not only as the President of the Republic of Armenia, and the first President to honour us with his visit but also as a university professor and a respected physicist.

Your theory of quantum politics is a true testimony to the scientific and political commitment - the unity you have been embodying since 2000.

This theory has also been expressed in your research activities, which you have brought to the international arena through various conferences, the book to be published in the near future, and articles published in various periodicals. Your theory allows you to look at today's political events from a different perspective.

As a diplomat, representing Armenia in the European Union, Belgium, the Netherlands, the Vatican, and the United Kingdom, you have made a special contribution to the development of cooperation between Armenia and Italy. I hope you will make such a contribution to establishing relations with Bologna."

Handing the honorary "Sigillum Magnum" Medal to the President of Armenia, Francesco Ubertini said: "We sincerely want to strengthen our friendship."

Anna Shirinyan, Head of the Chair of Armenian Language and Literature at the

University of Bologna, presented the history of the establishment of the Chair of Armenian Studies at the University, the Armenian-Italian historical ties and spoke about the significant Armenian trace in Italy. "Since the early Middle Ages, Armenians have settled in different regions of Italy, bringing with them various manuscripts. Armenian printing was born in Italy, and the first printed books were published in Italy."

According to her, various Armenian manuscripts and old printed books are kept in the University, which are currently being turned into catalogues. The University of Bologna is actively involved in the study of Armenian documents and manuscripts.

"The heritage we have received, the heritage we want to develop and enrich, has four directions: to promote Armenian studies, to train young researchers, to establish and develop communication with Armenian academic institutions, and most importantly, we want to emphasize the peculiarities of the Armenian people, people who manage to successfully preserve Armenian culture in any country where they lived and live today," said Anna Shirinyan.

Expressing gratitude for the appreciation, President Sarkissian particularly said: "It is a great honour for me to be here and receive the highest medal of this University, knowing that my name will be with the outstanding writers and figures, my good friend, the President of Italy Mattarella, the Pope, who have been awarded this medal," he said. "It is one thing to be a professor or an honorary professor in different universities, but to receive the Sigillum Magnum Medal of the University of Bologna, considered the mother of all universities, is beyond imagination for someone who has dedicated a small part of his life to science and education."

President Sarkissian noted that this event has a special significance for him. "Back in the mid-1970s, when I was a young researcher, I had the honour of being invited by a famous Italian physicist to visit the University of Bologna. I was a citizen of the Soviet Union at the time, and that invitation was rejected. As it was the first invitation, it left a big mark on my heart. Standing here today, I want to thank you for honouring me, my compatriots, and my country."

President Sarkissian briefly presented his new book to the participants of the event, which refers to the quantum world, particularly noting: "Quantum world is about creating a new world order that is not what we all think it is. It is very different, as in today's world everything is interconnected, and developments take place in another way. ”

After the ceremony, President Sarkissian and his wife Nouneh Sarkissian visited the university library and got acquainted with the unique specimens of the Armenian literary heritage kept there. Professor Anna Shirinyan presented the unique copies of the first Armenian printed books, as well as the original (1691) of the famous map of Armenian monasteries and sanctuaries by Jeremiah Çelebi Kyomurchyan.