"Armenia is an important partner." The Italian press widely covered the first state visit of the President of Armenia to Italy 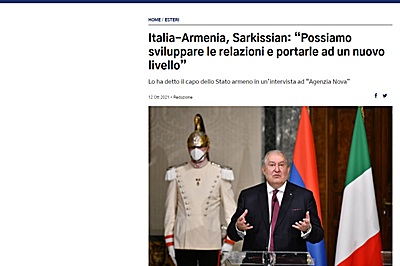 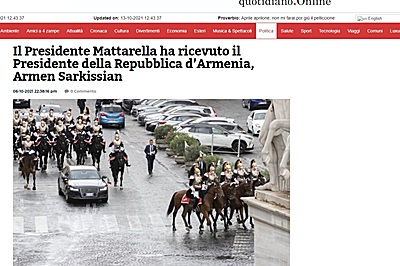 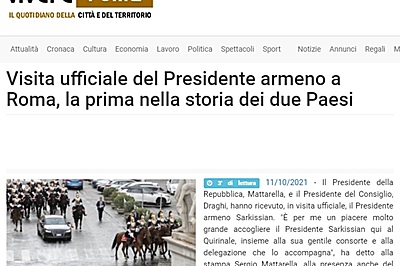 Italian, as well as the international mass media, widely covered the unprecedented state visit of the President of the Republic of Armenia Armen Sarkissian to the Italian Republic.

The media especially emphasized that it was the first state visit to Italy during the 30 years of Armenia's independence.

In particular, the Italian AskaNews noted that President Sarkissian’s "historic visit took place in the 30th year of Armenia's independence."

"Armenia is an important partner." With these words of the Italian President, the authoritative Agenzia Nova news agency referred to the press releases following the meetings between the Presidents of the two countries.

Agensir particularly referred to the statements made on the settlement of the Nagorno Karabakh conflict. "We believe that it is important to trust the actions of the Minsk Group and Co-Chairs to find a satisfactory, well-founded, and negotiated solution to the problem," the media quoted President Mattarella.

One of the famous periodicals of Milan, Mi-lorenteggio, covered the statements following the meeting of the Presidents. In particular, quoting Mattarella, the media outlet reported, "Armenia and Italy can be proud of the great and traditionally friendly relations, distinguished by a high level of contacts and cooperation."

And Vivere Roma noted that the friendship between the two countries was once again manifested in the days of the coronavirus when the President of Armenia was one of the first to call President Mattarella.

The Italian AskaNews and Today agencies also covered the opening of the exhibition of paintings by Armenian painters at the Presidential Palace Quirinal in Italy, attended by Presidents Armen Sarkissian and Sergio Mattarella.

The well-known Italian TV channels and news agencies, including Corriere della Sera, La Sicilla and other media, widely covered the reception of President Armen Sarkissian by the Prime Minister of Italy Mario Draghi on the second day of the official visit, October 7.

On the same day, President Sarkissian visited one of the oldest and largest universities in Europe, La Sapienza University in Rome. The official electronic platform of the university, Uniroma, stressed the importance of the visit of the President of the Republic of Armenia to the university, as it was during this visit that the start of the classes of Armenian Studies at La Sapienza University was officially announced, and a corresponding memorandum was signed.

The official newspaper of the University of Bologna, one of the oldest universities in the world, widely covered President Sarkissian’s visit to that higher education institution. It was registered that the President of the Republic of Armenia was awarded the highest medal of the school, Sigillum Magnum, awarded to prominent figures who have worked in the fields of politics, science and culture.

President Sarkissian summed up his state visit to Italy to Agenzia Nova "The purpose of the visit was to develop the Armenian-Italian relations and raise them to a new level," he said in an interview. Speaking about the high-level meetings held during the visit, the President of Armenia noted that the two countries have historically warm and friendly relations, and today there is a mutual will to do more. In particular, he noted that the two countries can successfully cooperate in the latest technologies. During the interview, he touched upon the Armenian-Italian economic ties and cooperation, the potential for expanding the existing relations, as well as the post-war situation in Armenia, relations with neighbouring countries, and possible regional developments.

The Lebanese NNA (National News Agency) also referred to the state visit of the President of Armenia, noting that it was the first state visit to Italy during the thirty years of Armenia's independence.