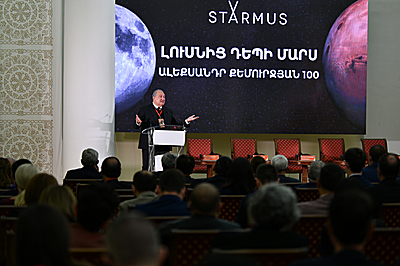 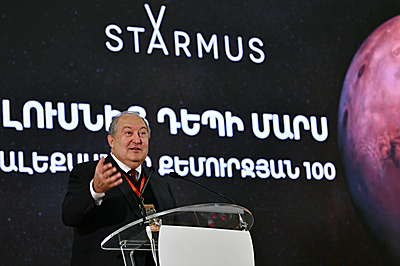 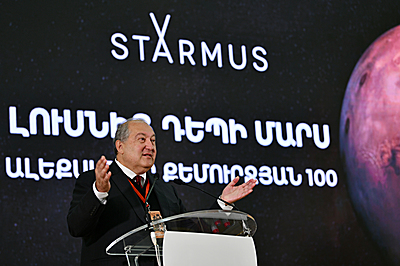 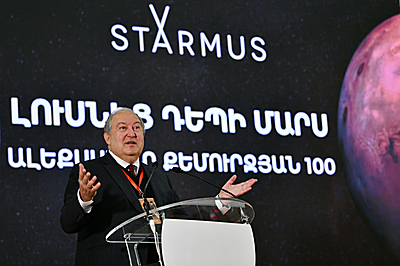 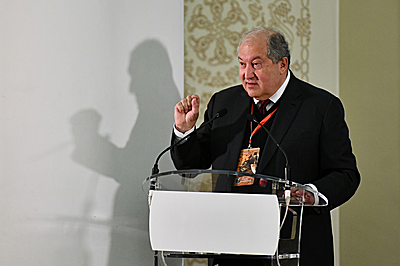 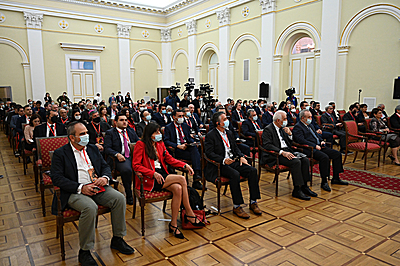 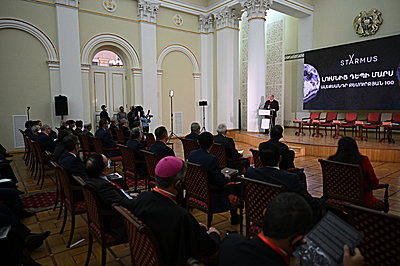 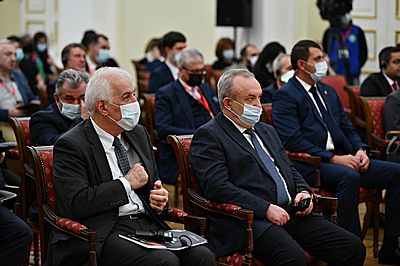 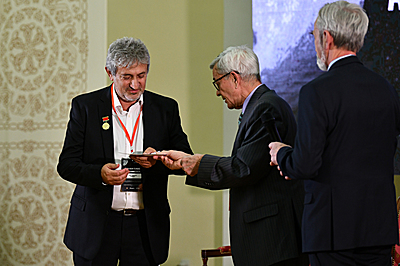 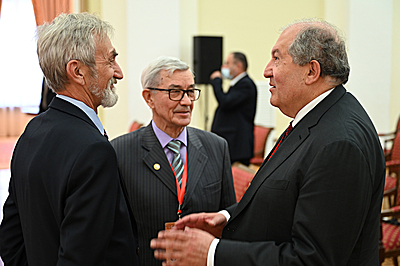 The "Kemurjyan-100" Conference, dedicated to the 100 years of the world-famous Armenian engineer Alexander Kemurjyan, took place at the the RA President’s Residence today under the high patronage of President Armen Sarkissian. It is considered to be the starting event of the 6th STARMUS International Festival of Science and Art to be held in Armenia next year. Among the many guests, Vladimir Kemurjyan, the son of Alexander Kemurjyan, also took part in the Conference.

In his welcoming speech, the President of the Republic Armen Sarkissian noted that it was a great honour for him to open the Conference dedicated to the 100th anniversary of the great scientist, engineer, citizen, and Armenian, Alexander Kemurjyan. "Ultimately, it is history that evaluates our lives. One hundred years is already a history," said the President.”There are cases when you live your life, and the assessment of whatever you did or did not is either not evaluated or done incorrectly; only time cleans away what is secondary and leaves what is significant, pivotal and valuable for history. In this sense, today, after going through the whirlwinds of history, when there is no Soviet Union, and there is not any rivalry between the Soviet Union and the United States in space, there are cases and names that will be with humanity for centuries and millennia. One of them is the name of Alexander Kemurjyan."

President Sarkissian noted that during the last two weeks he had heard the surname Kemurjyan and had spoken about it twice in connection with the fate of two different people. "I was at the University of Bologna in Italy a few days ago. I was at the University of Bologna in Italy a few days ago. It has an enormous history, this great temple of books, and knowledge. There, on the table in the university library was a map of 1691, about four metres long. It was a map of Armenian historical and historical-cultural values, located in historical Armenia (from the Ottoman Empire at that time, historical Cilicia, Vaspurakan to Eastern Armenia, up to Artsakh), hand-painted, of fantastic beauty, and enormous historical value. And the name of the author of that map was interesting - Yeremia Kemurjyan, said the President, I asked my colleagues to find the connection of the Kemurjyans. I think it is really a family, starting from Yeremia Kemurjyan, who organized and led that huge work from Constantinople, who had a great talent, and maybe that talent had genetically passed on to Alexander Kemurjyan, and to you. So, I will be happy to make that small discovery together, to connect Yeremya Kemurjyan with Alexander Kemurjyan. ”

Touching upon Alexander Kemurjyan's scientific activity, the President particularly noted that science, knowledge, and art, as well as engineering art should be given a worthy assessment, in general. "When we talk about great engineers, we cannot fail to go as far as Ancient Greece, Rome, and Egypt. For instance, looking at the pyramids, you think what engineering genius was needed to build such a pyramid, said President Sarkissian, There are genius engineering solutions that become a symbol, art from Leonardo da Vinci's paintings, Thomas Edison's electric car, Korolyov's rocket, Steve Jobs' Macintosh and iPod, Alexander Kemurjyan's lunar rover.

To get on a plane has become commonplace. However, historical for everyone was the rocket of the two brothers who built the first plane. People will fly into space: schoolchildren, children, scientists, businessmen; people will start living on the Moon, but all the same, the first lunar rover that is the basis, the mother and father of future Moon rovers and Mars rovers is Alexander Kemurjyan’s lunar rover. And it will remain a genius engineering solution, a genius work of art, and a symbol of all the machines that will travel to Mars, to the Moon, and other distant planets. Alexander Kemurjian's lunar rover, like the first Macintosh, the first electric car, and Leonardo's brilliant engineering solutions, will go down in history. I am happy, that the historical time has come to evaluate correctly Alexander Kemurjyan. I am happy that this creative genius in engineering art and science was my compatriot.

I consider it a great honour to stand here today as an Armenian, an Armenian scientist, and someone who appreciates everything that is new and creative; I stand here as the President of the Republic of Armenia to congratulate all of us on the 100th anniversary of this man of genius, and wish his descendants, in particular, his son, continue his work, because the time of Alexander Kemurjyan, the time of Moon rovers, and Mars rovers is just coming.”

The opening of the Conference was welcomed by the RA Minister of High Technological Industry Vahagn Khachaturyan, the Minister of Education, Science, Culture and Sport Vahram Dumanyan, and the Founding Director of STARMUS Festival Garik Israelyan.

Minister Vahagn Khachaturyan particularly said that we should be able to find our place in the field of space travel, implement or continue Alexander Kemurjyan's ideas.

The Minister of Education, Science, Culture and Sport stressed the significance of the Conference to inspire young people and encourage interest in science.

Garik Israelyan, the Founding Director of STARMUS Festival, considered the Conference as the starting event to the 6th STARMUS International Science and Art Festival to be held in Armenia next year.

Within the framework of the Conference, cancellation of the stamp, dedicated to the 100th anniversary of Alexander Kemurjyan, took place.

During the Conference, Alexander Kemurjyan’s son Vladimir Kemurjyan presented the life and legacy of the famous scientist. Speakers from around the world presented video reports on astronomy, astrophysics, astronautics, recent scientific research, and achievements in these fields. A panel discussion on "Space and Humanity" was organized.

***
Alexander Kemurjyan worked at the leading scientific institutions of the Soviet Union. Working at the Transmash All-Union Research Institute in Leningrad, his main specialization was designing tanks for the Soviet Army. Later, in the early 1970s, a working group led by Kemurjyan participated in the creation of Lunar Rover 1 and Lunar Rover 2. The first Mars rover in the world called "PROP-M" was designed in Transmash, and worked out by a team of 150 engineers led by designer Alexander Kemurjyan.

During the Chernobyl nuclear disaster, STR-1 robots were created and produced under the leadership of Kemurjyan in the shortest possible time. The autonomous transport robots worked for more than 200 hours, removing more than 90 tons of radioactive materials.

Kemurjyan is a well-known name in the world science. In 1998, the famous British publishing house "Melrose Books" included the name of Alexander Kemurjyan in the list of famous people of the 20th century. In 1997, the International Astronomical Committee named the asteroid No. 5933 after Kemurjyan, and in 2010, the Russian Cosmonautics Federation issued the Kemurjyan Medal.