Geopolitical changes and technological development. Armenian Summit of Minds to be held under the auspices of President Armen Sarkissian in Dilijan for the third time 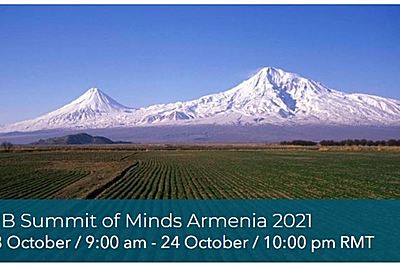 On October 23-24, Armenia will host the prestigious international Summit of Minds for the third time. The Summit of Minds, annually held in the French city of Chamonix, and hosted in Armenia since 2019, received the name of Armenian Summit of Minds. An exceptional agreement on its organization was reached in September 2018, when President Armen Sarkissian participated as the key speaker in the annual Summit of Minds.

Today, the Armenian Summit of Minds, traditionally held in Dilijan, has become a unique Armenian brand. It is held under the auspices of the President of the Republic of Armenia Armen Sarkissian, and the main partners are "The Monthly Barometer" authoritative analytical magazine and the Central Bank of Armenia.

The Summit of Minds brings together well-known figures of political, economic, scientific, and cultural circles from different countries of the world. It is a unique platform to exchange ideas, knowledge, and experience, the main purpose of which is to present new ideas on important issues worldwide.

This year's summit, entitled “Global Changes in the New Quantum World,” will start with a dialogue between President Armen Sarkissian and Romano Prodi, former Prime Minister of Italy and former President of the European Commission.

The plenary sessions will focus on two main topics: the geopolitical changes in the world and in the South Caucasus, and the development of technologies, particularly artificial intelligence and biotechnology, in the 21st century. The program of the 6th STARMUS Festival of Science and Art to be held in Armenia next year will be presented within the framework of the Summit.

Given the pandemic situation in the world, some participants will take part in the summit online. Among the participants of this year's summit are former heads of state, heads of reputable international think tanks, international organizations, well-known technology companies, and professors from world-renowned universities, including the former President of Argentine Mauricio Macri, former President of the Swiss Confederation Micheline Calmy-Rey, Chairman of the Skolkovo Foundation in Russia and President of the World Chess Federation (FIDE) Arkady Dvorkovich, RF State Duma Deputy, First Deputy Chairman of the Committee on the CIS Affairs, Eurasian Integration, and Relations with Russia Nationals Abroad Konstantin Zatulin, Director of Investment and Enterprise at the United Nations Conference on Trade and Development (UNCTAD) James Zhan, legendary sportsman Roger Gracie and others.

Speaking about holding the summit for the third time in Armenia, Thierry Malleret, the organizer of the Summit of Minds and the founder of the authoritative analytical magazine "The Monthly Barometer," considered the event a good opportunity to discuss with experts from different countries, point out challenges and offer solutions. "We are incredibly honoured to be hosted by the President of Armenia. Armenia is a small country geographically, but a huge country in terms of interest. Everybody in the world knows about them, the origin of Armenians, the value and wealth of Armenia, in particular, the Armenian Diaspora, which is present in many countries around the world. Armenia is also a very interesting place in geopolitical terms. We hope that by co-hosting this summit with Armenia, we will be able to generate interesting opportunities for this country," said Thierry Malleret. "Armenia thinks of itself as a startup nation, like so many other small countries around the world, which have very strong intellectual and social capital, good education; they are very good at mathematics, physics, and hard sciences that allow the country to move forward in the field of innovation and technology. We think that the Summit will help Armenia materialize all that."