This summit is about the future. The Third Armenian Summit of Minds has started in Dilijan 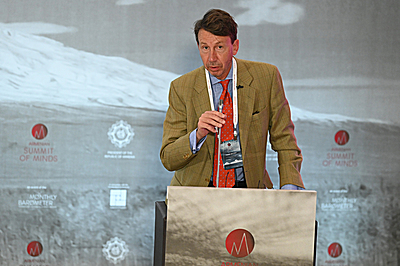 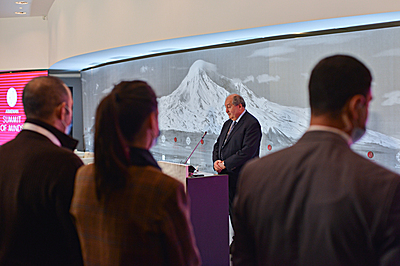 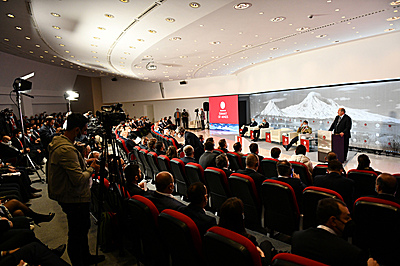 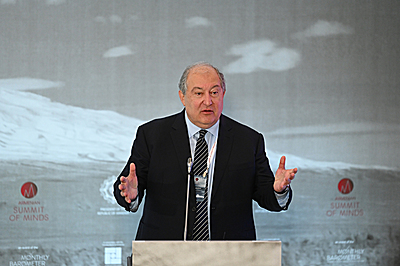 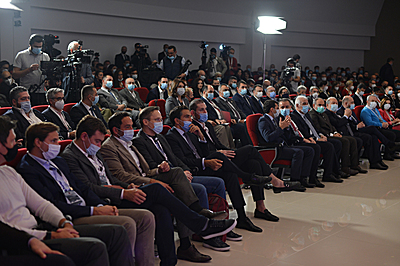 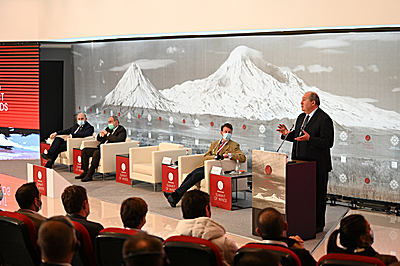 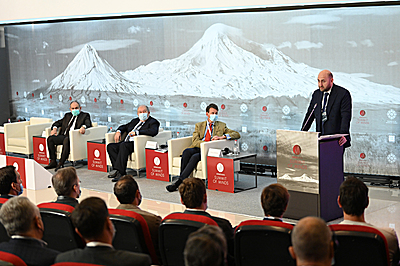 The Armenian Summit of Minds started its work in Dilijan today. This year, the summit held under the auspices of the President of the Republic of Armenia Armen Sarkissian, is entitled "Global Changes in the New Quantum World."

Well-known representatives of the political-economic, scientific-technological circles, expert-analytical community, participating in the summit from different countries of the world, will be discussing the two main topics of the summit for two days: geopolitical changes and technological developments in the world and in South Caucasus.

Thierry Malleret, a partner of the Summit of Minds and the founder of The Monthly Barometer, the authoritative analytical journal, welcomed the participants in the Armenian Summit of Minds and particularly said in his opening speech: "We are proud and delighted to be here. We are very grateful to President Sarkissian for hosting us. The Summit of Minds always combines three key attitudes: great contents, great people, and the great outdoors. Dilijan, the Summit of Minds here in Armenia, provides all three of those components."

In his speech, the President of the Republic Armen Sarkissian noted that taking into account the situation in the world, they decided with their colleagues to hold the summit on a hybrid basis. "This is the third summit, and the first to be held in a hybrid way," he said, "However, I am sure that in the future, a lot of conferences will be held on a hybrid basis in the new world."

The title of this conference is about the new world or, as I call it, the quantum world. The summit includes two topics. The first will be dedicated to geopolitics, which changes every day. The world is not unipolar or multipolar, it is much more complex, and we are trying to understand how to live in this new global, quantum world. This part of the title also refers to regional geopolitics, because of the events that happened recently during the last year here in Armenia, in South Caucasus and Central Asia; these are significant events that will reshape the regional geopolitics.

The second part of our discussions will be about the future, how artificial intelligence, new technologies, and biotechnologies are going to or are already changing the world. Do we notice the changes in the world?”

The President noted that the fourth summit, scheduled for the next year, will be jointly held with another important event expected in Armenia, STARMUS, a conference dedicated to science, music, and technology. "STARMUS will be committed to the future," said the President, noting that the Government of Armenia fully supports the Armenian Summit of Minds and STARMUS.

Noting that the world has changed dramatically between the last year's second and the third Armenian summits this year, the President said that when there was COVID all over the world, which brought with it a global tragedy, our neighbours unleashed a war. "We had a double tragedy; we lost our compatriots not only because of the pandemic but also in the war, we lost mostly young lives."

At the suggestion of the President of the Republic, the participants honoured the memory of the victims of the pandemic and the war.

At the summit, Prime Minister Nikol Pashinyan underscored the significance of such meetings and discussions. According to him, the modern world is a world of models and modelling, where everything or almost everything is modelled and works in that logic. "When we model the world, we get to know it better, start to have greater participation in the management processes, and make them more predictable for us," he said, "In the non-modelled world, people are not aware of what is what and the reason something happens. In a modelled world, all this is already becoming predictable. In this respect, I think today, the most urgent issue to be discussed during the Summit of Minds is the modelling of geopolitics, how and why the processes take place. Especially in the forthcoming and current periods, there are questions of pivotal significance for the past, present, and future of our country, the answers to which are crucially important from the perspective of the distinctive future. And that future will be manageable and predictable insomuch as we shall be able to model the geopolitics in our region in the narrower, broader, or the more global sense, on the whole."

Mr. President, once again I would like to welcome this important initiative, which is already regular. I hope that this meeting, this event will become a platform for us to model our economy, politics, and geopolitics so that the processes, taking place with and around us are more understandable to us, and, therefore, more manageable."

The chairman of the Central Bank of Armenia, Martin Galstyan, who hosted the summit, noted that new valuable ideas are voiced every time at the Armenian Summit of Minds held under the auspices of the President of the Republic of Armenia, at the Dilijan Training and Research Centre of the Central Bank. "Perhaps, this is the reason why we look forward to this event every year." Martin Galstyan touched upon the topics of this year's summit, stressing the importance of expanding professional and profound discussions around them.