The rich historical relations between the two peoples are a good basis for building future-oriented interstate relations. President Sarkissian spoke with the Crown Prince of Saudi Arabia 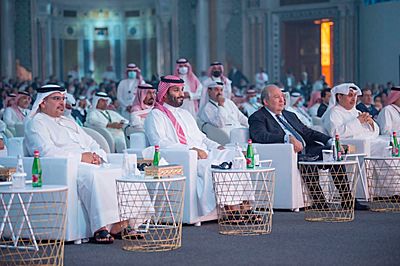 The President of the Republic of Armenia Armen Sarkissian paid the first visit to Saudi Arabia, one of the pivotal countries of the Arab-Islamic world, in the history of independent Armenia.

Within the framework of that visit, which is of exceptional importance in the history of Armenian-Arab relations, particularly those between the Republic of Armenia and Saudi Arabia, the President of Armenia visited the 5th Conference of the "Future Investment Initiative."

Heads of many states, members of governments, heads of well-known transnational and global companies, also businessmen attended the Conference.

President Sarkissian together with the Crown Prince, Deputy Prime Minister, and Minister of Defense of Saudi Arabia Mohammed bin Salman attended the opening ceremony of the conference.

The President of Armenia, and the Crown Prince of Saudi Arabia talked about the need to develop relations between the two countries and their future. It was noted that the rich historical ties between the two peoples are a good basis for building future interstate relations.