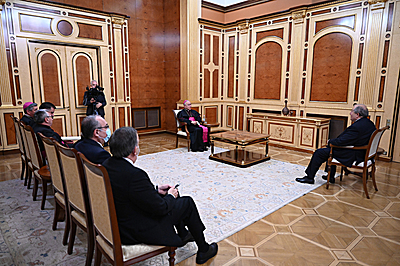 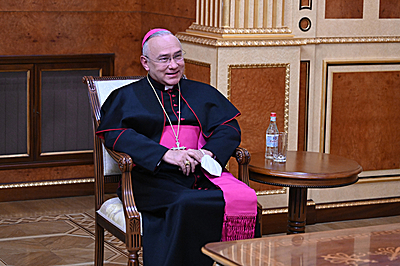 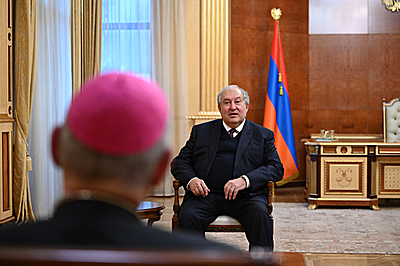 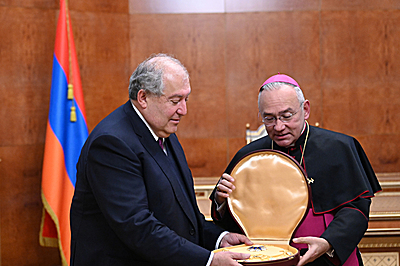 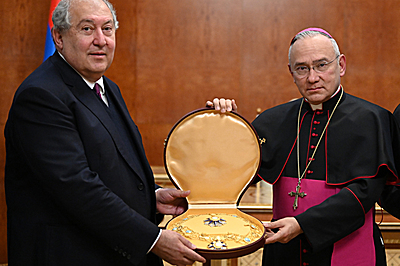 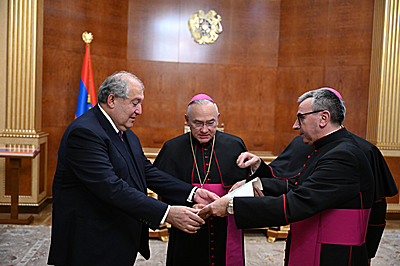 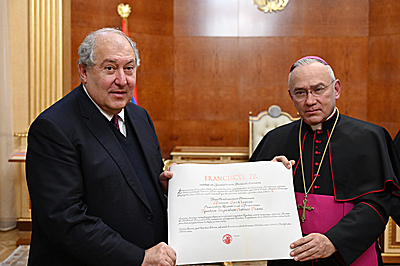 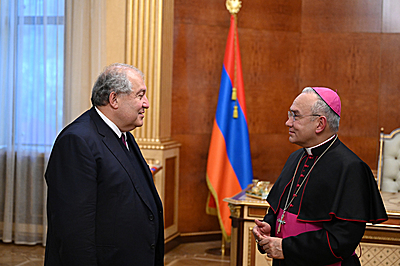 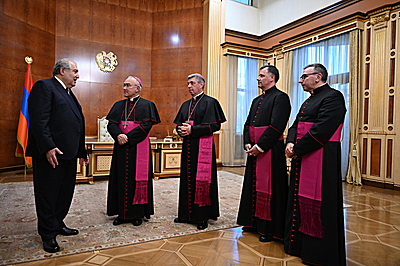 President Armen Sarkissian met with Archbishop Edgar Peña Parra, Substitute of the Secretariat of State for General Affairs of the Holy See, who is in Armenia on an official visit for the inauguration of the Vatican’s Apostolic Nunciature in Yerevan.

The President of the Republic once again emphasized with satisfaction the continuous development of the interstate relations of Armenia and the Holy See, noting: "I am happy that the Holy See will have a permanent presence here. This is good news forArmenia and the Armenian Apostolic Church.”

His Holiness Pope Francis awarded President Sarkissian with the highest order of the Holy See, the Grand Collar of the Papal Order of Pius IX, for his significant contribution to the development of relations between Armenia and the Holy See, also as the first Ambassador of the Republic of Armenia to the Vatican.

"The Pope has delegated me to hand over the highest award of the Vatican to you," said the Deputy Secretary of State of the Holy See. - This bears witness to the unique relations between our countries. Opening an Apostolic Nunciature in Yerevan, we want to establish a very high level of relationship, to show the world the importance of the first Christian nation in history for us.”

It was noted that President Sarkissian is the first in Armenia and the only one in the region to be awarded the highest order of the Holy See, the Grand Collar of the Papal Order of Pius IX.

Considering it a great honour to receive that high award, President Sarkissian particularly noted: "I accept it as an assessment of my modest work, and recognition of the fact that I was the first Ambassador of Armenia to the Holy See. I have always worked for the sake of close relations between Armenia and the Vatican. So I accept this, promising to do more."

With special pride recalling the exhibition “Armenia-Rome: Two Thousand Years of Relations,” opened in March 1999 in the Sistine Hall of the Vatican Library, to commemorate the 1700 years of adopting Christianity as the state religion in Armenia, and stressing the significance of continuing the cultural dialogue, President Sarkissian proposed to celebrate the thirty years of diplomatic relations between Armenia and the Holy See with a new exhibition, once again highlighting the rich historical and cultural heritage. “This will be another way to talk about relations between our states, as well as an occasion to talk about the future,” said the President.

The President of Armenia conveyed his warm wishes to Pope Francis and noted with gratitude that in the period of hard and difficult challenges for our country, the Vatican extended a hand of solidarity to our state and people. "We all remember and appreciate the support we received from the Pope and the Vatican during the difficult days for Armenia," said President Sarkissian.