During his meetings within the framework of Bloomberg New Economy Forum, President Armen Sarkissian referred to the situation on the borders of Armenia due to the Azerbaijani military aggression 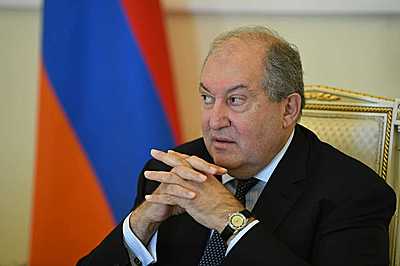 Within the framework of the prestigious international conference Bloomberg New Economy Forum in Singapore, President Armen Sarkissian met with a number of participating state and public figures, as well as the heads of influential media.

During the meetings, President Sarkissian presented the situation on our borders as a result of the Azerbaijani military aggression against Armenia, spoke about Azerbaijan's invasion of Armenia, encroachments on the country's territorial integrity, as well as the return of Armenian prisoners of war illegally detained in Azerbaijan.

President Sarkissian also gave interviews to international media, once again speaking about the post-war situation, the ongoing military aggression by Azerbaijan, and the invasion of Armenia's sovereign territory.

During the meetings with the heads of international corporations and companies, participating in the conference (among them, PayPal, McKinsey & Company, Bharti Enterprises, Mastercard, Temasek, Tata Group, and others), President Sarkissian also spoke about the prospects for Armenia's development and projects, aimed at the country's future.

The conference brought together world leaders, leaders of international organizations, and leading companies around the world to discuss the effects of the pandemic on the global economy, climate, and health care, new challenges, steps to cope with them, and new economic opportunities.