After the Genocide, the Middle Eastern countries accepted homeless Armenians as their brothers and sisters. Interview of President Armen Sarkissian to Arab News 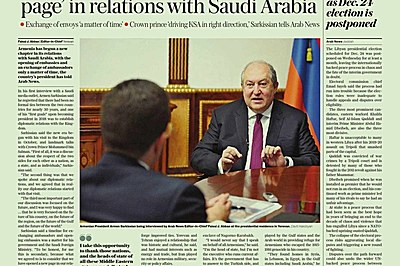 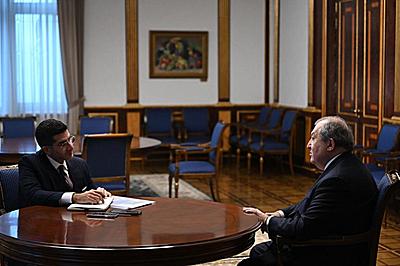 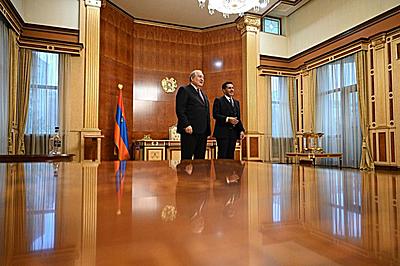 Faisal Abbas: You spoke about the Diaspora. I want to talk on an issue, dealing with Lebanese-Armenians. As you know, Lebanon is going through a difficult period, it is interesting that history turned in reverse. Armenians once migrated to Lebanon, starting the local Armenian community, and now, the opposite migration process seems to be taking place to Armenia.

President Sarkissian - First, this is an opportunity for me to thank the Arab world in general, the Middle East, including the Gulf countries, for what you did more than 100 years ago when Armenians left their homes in Turkey. Instead, they found a new home in Syria, Lebanon, Egypt, in the Gulf states, including Saudi Arabia. I would like to take this opportunity to thank the nations and leaders of all the Middle Eastern countries, in particular the Arab countries, for their brotherly treatment of us. These were states where the main or the only religion is Islam. And they took in homeless Armenians, who were Christians, as their brothers and sisters.

As for the current developments in the Middle East, in some places they are as tragic as what happened in Armenia with the Karabakh war. For example, Syria, dealing not only with war, human losses, and invasions from different parts. We, Armenians, are losing a very significant to us and huge cultural basis.

We must do something, most importantly, support our community in Lebanon in remaining because the values ​​they have created there are strong. I think it would be inadmissible if they left all that. I have been to Lebanon many times, it is a wonderful country. I was there in the early 1990s, when it reminded me of Nagasaki after an atomic bomb exploded...

Five or ten years ago, that was a country that was living in harmony. What they got wrong was on the financial side, because of the structure of the constitution and the way they were running their affairs. I would love to help our Armenian community stay there.

That is my strength, a small state, but a world nation. My target is to change the Constitution because by the current Constitution, an Armenian living abroad cannot become a minister, unless he lives the last four years in Armenia, and carries only an Armenian passport...

It should be the other way around. You have to bring people who are so successful worldwide. There are hundreds of thousands of experienced people, and we are not using them. Imagine a Gulf state that decided not to use oil. We are just such a country. Our oil is people worldwide, but we do not use them effectively; that is why, I want to change the Constitution.

Armenia joined the Eurasian Economic Union, the only state in that structure, which also has close relations with the European Union. We have signed a Comprehensive and Extended Partnership Agreement with them, being a member of the EEU. It can have the following meaning for a Gulf country. A country can register its company in Armenia, run business from here because there are no tax and customs differences between Armenia and Russia, Kazakhstan, Kyrgyzstan, Belarus, Armenia can be a gateway...

Armenia is a small country. I will be glad if the Gulf countries invest in Armenia in the areas that will be beneficial for them as well.

If I am asked where to invest, I will say in the field of science and technologies, high technologies.