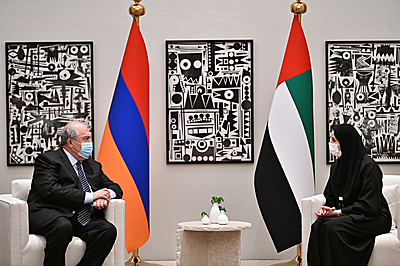 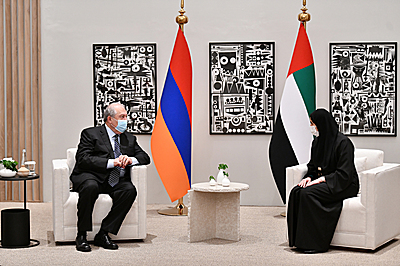 Within the framework of his working visit to the United Arab Emirates, the President of the Republic of Armenia Armen Sarkissian met with the Minister of State for Advanced Technologies and Science of the UAE Sara Al Amiri. The Minister is also the Chairman of the UAE Space Agency and the Council of Scientists; she also coordinates the introduction of science and advanced technologies in the development of the UAE economy.

During the meeting, President Sarkissian and Minister Al Amiri discussed possibilities of cooperation in science, technology, space research, and implementation of joint programs. Minister Al Amiri presented the work carried out by the United Emirates in fundamental sciences and space research; in particular, she touched upon the historical journey of the Emirates Mars Mission Hope Probe.

The interlocutors agreed that such ambitious programs were not only investments for the sake of the future but also a source of inspiration for young people to do science. President Sarkissian invited the UAE Minister of State to participate in the 6th STARMUS International Festival of Science and Art, scheduled for September in Armenia, one of the goals of which is to direct young people to science, new technologies, and the future.

President Sarkissian noted that Armenia also attaches great importance to the spheres of science and technology, considering them a priority from the viewpoint of our country's future. In this context, President Sarkissian spoke about the Presidential ATOM (Advanced Tomorrow) Initiative aimed at scientific and technological development and possible cooperation within its framework. They also touched upon the opportunities of implementing exchange programs and conducting joint research for the young scientists.