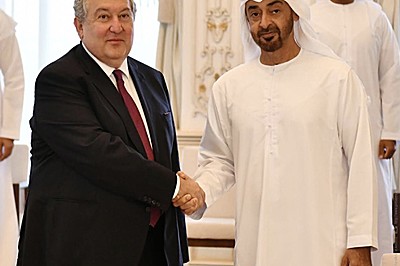 The President of the Republic of Armenia Armen Sarkissian, who is in the United Arab Emirates on a working visit, talked with the Crown Prince of Abu Dhabi, Deputy Commander-in-Chief of the Armed Forces, Sheikh Mohamed bin Zayed Al Nahyan.

The President of Armenia and the Crown Prince of Abu Dhabi discussed issues related to the Armenian-Emirati friendly relations and the ongoing cooperation.

They touched upon the investments between the two countries and the promotion of cooperation in different spheres of the economy, and issues related to the implementation of the agreements reached during President Sarkissian's visit.

During the conversation, they also exchanged views on several regional and international issues.