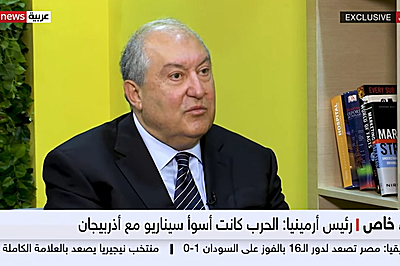 During his working visit to the United Arab Emirates, President of Armenia Armen Sarkissian gave an interview to the Sky News Arabia TV Company, in which he particularly referred to regional developments and Armenia's relations with Turkey and Azerbaijan.

Noting that negotiations are the way to a sustainable future, the President said: "I hope that this time, Azerbaijan and Armenia will be able to establish a lasting peace through compromises. But it will not be easy."

Regarding relations with Turkey, President Sarkissian noted that pragmatism and stability presuppose normal relations with neighbours, and there is no other way but a dialogue. At the same time, according to the President, it is impossible to ignore the historical realities, and to move forward without the support of the Diaspora, mostly formed because of the genocide. Armenia is a small country, but Armenians are a global nation. "I hope that one day, Armenians and Turks will succeed in this issue, but to do so, we cannot ignore the historical realities. We must be pragmatic to succeed and to be able to build stable and firm relations between Armenia and Turkey, as well as in the region," said President Sarkissian.