My resignation from the post of the President of the Republic will not hinder the successful implementation of the initiated programs and holding the Game of Legends in Armenia. President Armen Sarkissian sent a letter to the President of FIFA 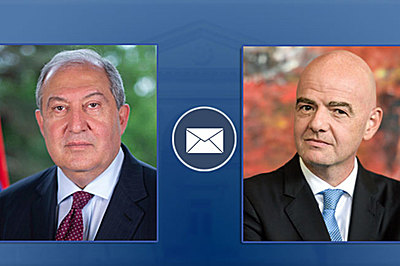 President Armen Sarkissian sent a letter to FIFA President Gianni Infantino, stating that his resignation will not hinder the successful implementation of the programs initiated during his presidency, and in particular, bringing to life the agreement on holding the Game of Legends in Armenia.

President Armen Sarkissian discussed the possibility of organizing the Game of Legends in Armenia, a friendly match between former and current world-famous legendary football players, with Gianni Infantino during a meeting in Qatar late last year, after which he wrote a letter of thanks to him, particularly noting: "I am convinced that we have laid the groundwork for effective cooperation between FIFA and Armenia. Armenia attaches great importance to cooperation with FIFA and the FIFA Foundation, which promises new perspectives for cooperation through football, the most popular sport in the world, and making our region a more peaceful, just and tolerant place for living. This mission is more important today than ever after the war in Artsakh and its aftermath in Armenia.

As you know, I highly appreciate the role of sports in an individual's social life. The benefits of sports for an individual are much more than purely physical. It builds character, teaches strategic-analytical thinking, and develops leadership qualities.”

After resigning, President Sarkissian again addressed a letter to President Gianni Infantino, which reads in particular: "This decision of mine will not prevent me from continuing my contribution to the successful implementation of the programs initiated during my presidency. It is the mission of my whole life, and it is an honour for me to work for the prosperity of Armenia, and it does not end with a position.

I look forward to continuing our friendship and cooperation with you and FIFA. I am committed to contributing to the Game of Legends meeting planned in Yerevan. I think that this initiative will have a great impact on the development of sports in Armenia for our youth and peace in the region."

President Sarkissian proposed to hold the Game of Legends in Armenia this year, simultaneously with the Armenian Summit of Minds and the STARMUS-6 Festival.