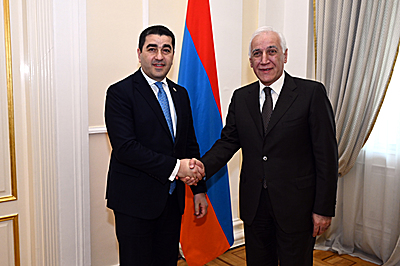 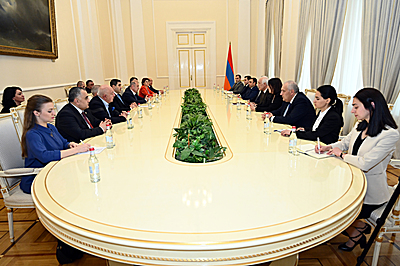 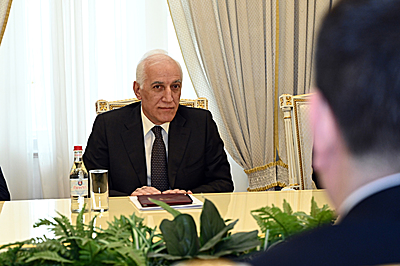 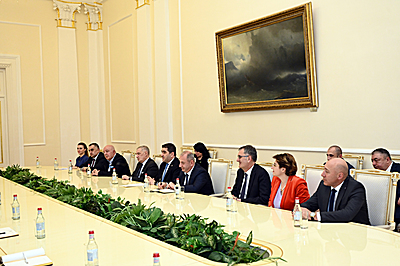 President of the Republic Vahagn Khachaturyan received the delegation headed by the Speaker of the Georgian Parliament Shalva Papuashvili.

President Khachaturyan noted that such meetings convey special dynamics to developing and further deepening the cooperation between our countries, and they should be as frequent as possible. The President stressed that this visit is of special importance, as it takes place in the year marking the 30th anniversary of establishing diplomatic relations between Armenia and Georgia.

In the context of building security and sustainability in the region, President Khachaturyan presented Armenia's long-standing efforts to establish peace, underscoring the issue of defending the rights of the Armenians of Nagorno-Karabakh.

Expressing gratitude for the reception, the Speaker of the Parliament of Georgia congratulated Vahagn Khachaturyan on assuming the presidency. He noted that the official visit of his delegation is aimed at deepening the current relations between the two countries, which have been friends for centuries, and discussing the prospects of cooperation.

Shalva Papuashvili expressed support to the efforts of establishing long-lasting peace in Nagorno-Karabakh, emphasizing that they are for resolving the issues through dialogue, and are ready to play their role and contribute to this matter.

The sides exchanged views on the agenda related to the Armenian-Georgian cooperation.