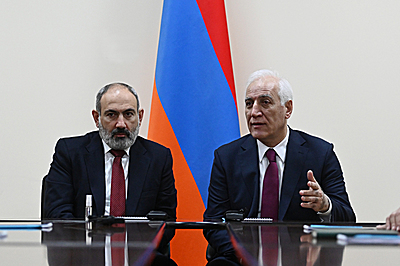 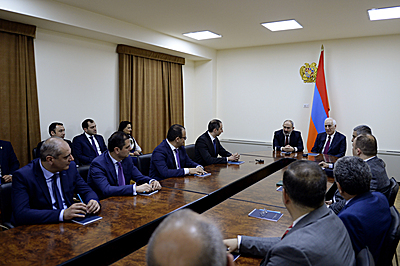 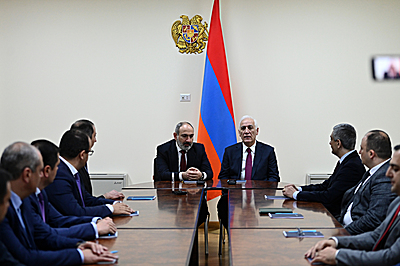 With the participation of President of the Republic Vahagn Khachaturyan, RA Prime Minister Nikol Pashinyan introduced the newly appointed Minister Robert Khachatryan to the staff of the Ministry of High-Tech Industry of Armenia.

Nikol Pashinyan thanked Vahagn Khachaturyan for his work as the Minister of High-Tech Industry of Armenia.

"Mr. Khachaturyan managed to create a functional team in the Ministry in a short time, and the atmosphere around the Ministry was very positive during that period. We have seen very specific programs, and results. We hope that the public will be more aware of the programs and their results," said the Prime Minister.

Nikol Pashinyan expressed confidence that President Vahagn Khachaturyan will keep his attention on the sphere and contribute to the implementation of all programs.

Vahagn Khachaturyan noted that during his seven months as a minister, he always felt the direct support of the Prime Minister for the implementation of various programs.

"There is always a need for that help; new ideas will be born with your help, and they will also become a reality. There is one important circumstance that I would like to mention that inspired me. You have given freedom of action, at the same time stating that the most significant thing in that freedom is responsibility. And, as a minister, I have worked with that responsibility, feeling that what we do, we do together with the government, and we contribute to the implementation of the government's ideas. As for the further work, it will turn out that I cannot stay away either, as I am also responsible for the programs implemented by the government. There should be my participation in creating a truly harmonious atmosphere in the Republic of Armenia. In any case, I will do my best for us to be really successful, and to have new achievements. I congratulate Mr. Khachatryan together with you, and wish success to him together with the team. I am convinced that following the appraisal voiced by the Honourable Prime Minister, the result will be that you will receive such assessments again," said Vahagn Khachaturyan.

The newly appointed Minister Robert Khachatryan thanked for the trust. He noted that the team formed in the Ministry, and the work on a sound basis, in which he, Vahagn Khachaturyan, had played a great role as well, will continue to be successfully implemented.