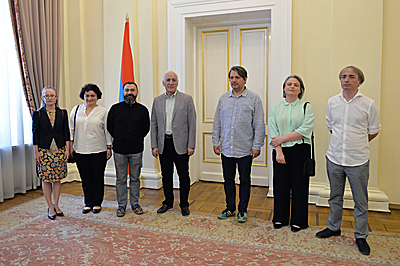 The President of the Republic of Armenia, Vahagn Khachaturyan, hosted representatives of PEN International’s three member centers today. During the meeting, the current president of PEN Armenia, writer Armen Ohanyan, discussed the significance of the establishment of a culture of mutual agreement, the global popularization of writing and literature as well as the struggle for freedom of speech.

The current and former presidents of PEN Georgia, renowned poets Paata Shamugia and Rati Amaglobeli, fiction writer Tamta Melashvili, and Polina Sadovskaya, PEN America Program Director for Eurasia, particularly emphasized the importance of further developing Armenian-Georgian cultural ties, which have existed for centuries but now required a revitalization that matched the spirit of the times. Asya Darbinyan, coordinator of Armenian-Georgian relations for PEN Armenia, mentioned the similarities between the contemporary literature scene in both neighboring countries as well as the popularization issues faced in both markets.

President Khachaturyan praised the efforts and readiness of the sister PEN centers to improve ties between the literary and intellectual communities in these neighboring countries and expressed readiness to support the two peoples in their steps towards cultural dialogue and mutual appreciation.