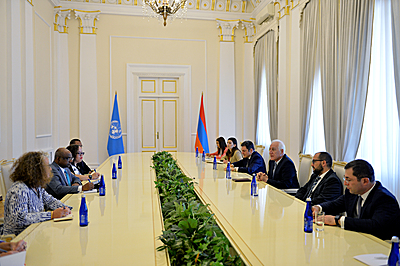 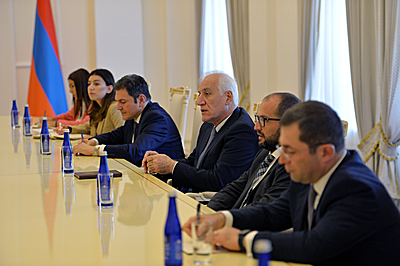 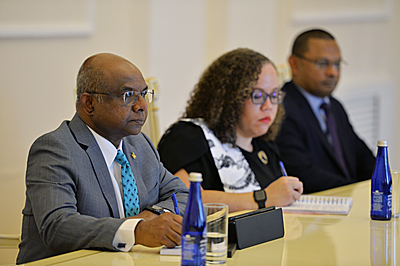 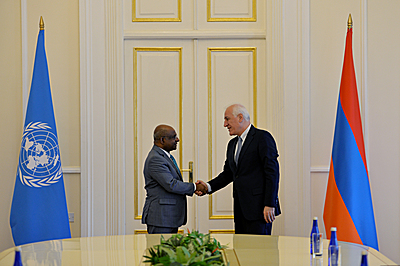 Today, President Vahagn Khachaturyan received the President of the General Assembly of the United Nations Abdulla Shahid and his delegation.

“I am happy to welcome you in the Republic of Armenia. Your visit coincided with the 30th anniversary of Armenia’s membership to the United Nations. It was March 1992. However, in December we have another significant event to celebrate, because the UN office opened in December 1992”, President Khachaturyan said. “After independence, becoming a member of the United Nations was one of our wishes, because we understood that the further development of our country would not be possible without cooperation with the United Nations. Our history of these 30 years showed that we really achieved success, which was of great importance for the establishment of our state, with the support of the United Nations. I want to emphasize the establishment of democratic institutions, in which the role of the UN was significant. During these 30 years, our state actively cooperated with all UN structures, implemented various programs, which were mainly aimed at eliminating poverty and inequalities, as well as establishing a legally stable state.

I am sure that your visit will contribute to further cooperation, especially because your presidence during the 76th session of the General Assembly is impressive, as your efforts are aimed at restoring relations or economic life in the post-pandemic world, bringing together the international community.”

Abdulla Shahid thanked for the worm reception and noted that it is a big honor for him to visit Armenia in the period of celebrating the 30th anniversary of the membership of the Republic of Armenia in the United Nations Organization. He emphasized that all the programs with Armenia, aimed at improving the lives of citizens, will continue to be implemented.

President Vahagn Khachaturyan and Abdulla Shahid made reference to the issues related to the regional security and stability. The President also raised the issues of returning the Armenian prisoners of war and detainees that are still kept in Azerbaijan. The President of the UN General Assembly welcomed Armenia's efforts to promote peace, noting that the establishment of a long and stable peace will create wide opportunities for all the countries of the region.