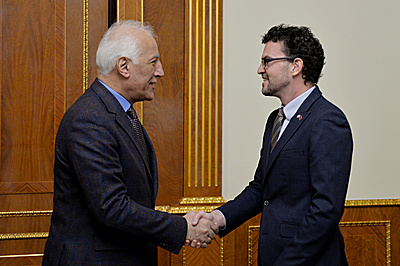 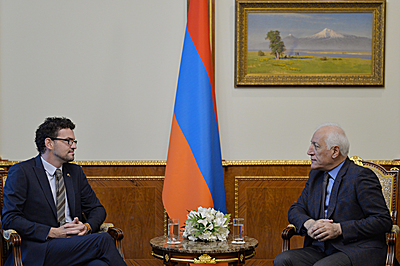 President Vahagn Khachaturyan received the Ambassador Extraordinary and Plenipotentiary of the United Kingdom to the Republic of Armenia John Gallagher.

Ambassador Gallagher expressed his gratitude to the President for the reception and emphasized that it is an honor for him to visit the Residence of the President of the Republic of Armenia.

During the meeting, the sides touched on the agenda of the Conference of the Parties to the United Nations Framework Convention on Climate Change.

At the Ambassador’s request, the President Armenia's position and expectations from the conference and highlighted the commitment of the Republic of Armenia to the implementation of the agreements signed with the European Union and international partners, as well as the obligations assumed by the "Paris Convention". President Vahagn Khachaturian stressed that at present climate change and resistance to it knows no borders, and all countries must contribute to countering them.

Ambassador Gallagher stressed that Great Britain is always eager to provide Armenia with support in the implementation of reforms in the field of “green economy”, agricultural modernization and related areas, both from the prospective exchanging experience and bringing practical programs to life.

Both sides agreed to continue cooperation and close contacts.