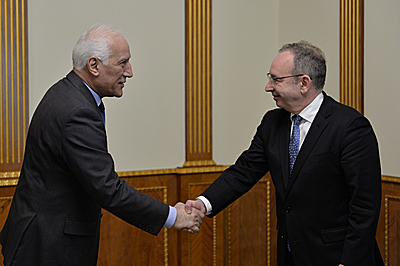 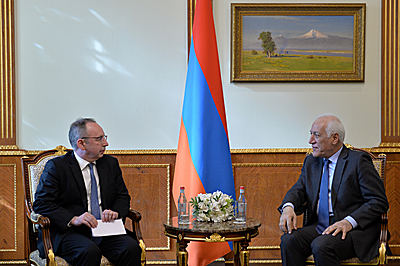 President Vahagn Khachaturyan received the Director General of Central and West Asia Regional Department at the ADB Eugene Zhukov. The Country Director of the ADB Armenia Resident Mission Paolo Spantigati and the Deputy Minister of Finance of RA Vahe Hovhannisyan were present at the meeting.

Welcoming Eugene Zhukov, President Khachaturyan noted that since the official start of the cooperation between the Asian Development Bank and the Republic of Armenia in 2005, the bank has become one of Armenia’s important international partners. The President emphasized that he finds the projects implemented by the Bank in cooperation with the Armenian government and the private sector highly important.

Expressing his gratitude to the President for the reception, Eugene Zhukov noted that Armenia is one of the most important partners of the Asian Development Bank and they have an intention to continue and further expand multi-layered cooperation programs on transportation, "green economy", education and numerous other fields, both in the private sector and with the government of Armenia.

During the meeting, the President touched upon the economic and political realities in the South Caucasus and their impact on the economic development of the region. Vahagn Khachaturyan noted that one of the fundamental conditions for a qualitative change in the development of the economy of Armenia and the entire region is peace and security, and Armenia is unwavering in its position of establishing peaceful and neighborly relations with all its contiguous states.

Both sides attached importance to the continuity of the cooperation between Armenia and the Asian Development Bank in the future.