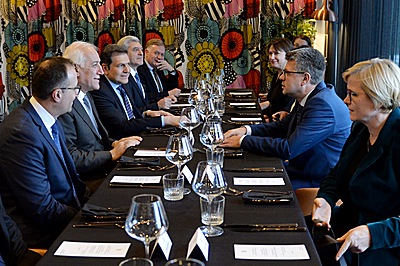 Within the framework of his visit to the Republic of Estonia, President Vahagn Khachaturyan had a working dinner with the Minister of Foreign Affairs of Estonia Urmas Reinsalu.

President Khachaturyan welcomed the statements of the Minister of Foreign Affairs of Estonia concerning the blockade of the Lachin Corridor and expressed his gratitude to Estonia for its clear position on the issue.

Minister Reinsalu in his turn emphasized the fact that Estonia is profoundly interested in the establishment of sustainable peace in the region. Urmas Reinsalu also noted that Estonia fully supports the decision to deploy a permanent EU observation mission along the border. During the meeting, the sides touched upon further promotion of Armenian-Estonian cooperation, as well as the issues of using the EU Eastern Partnership platform effectively.

Speaking of the current situation and issues in South Caucasus, Vahagn Khachaturyan highlighted that Armenia has definitely adopted the approach of achieving sustainable and everlasting peace in the region and establishing neighborly relations with the contiguous states.

Responding to the President of Armenia, the Minister of Foreign Affairs of Estonia expressed his readiness to make every effort to contribute to the resolution of the issues in the region. The Minister also welcomed the eagerness of the Armenian side to establish relations with Turkey with no preconditions.