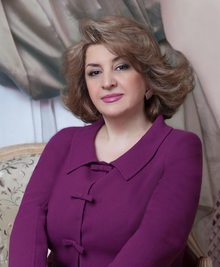 Rita Sargsyan Alexander was born on March 6, 1962 in Stepanakert in the family of a military serviceman.

After graduating secondary school No. 3, in Stepanakert Rita Sargsyan received musical education and worked in a kindergarten as a music teacher. She hasn’t worked after having moved to Armenia.

Rita Sargsyan sponsors the Donate Life charity foundation, which assists children suffering from blood cancer and other severe diseases, as well as the Autism and Aragil national foundations.

The Donate Life charity foundation was set up in December 2009. Since 2010, Mrs. Rita Sargsyan is the Chairperson of Board of Trustees of the Foundation. As of 2017, the Charity Foundation has assisted 495 children. With efforts of the Foundation and personally the First Lady of Armenia,  the Hematology center after prof. R.Yeolyan has been renovated and equipped with advanced technology that made possible the implementation of bone marrow transplantations.

Since 2011, Mrs. R. Sargsyan has been supporting Aragil national foundation, which helps socially vulnerable couples to have children through in-vitro fertilization. As of today, 300 children were born with Foundation’s assistance.

With the efforts of Autism national foundation, set up on April 2, 2012, a school for children suffering from autism has been established. The school is currently attended by 200 children.