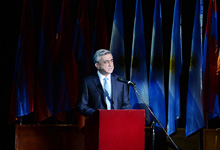 I am very happy to be in Argentina and to meet the representatives of the Armenian community. And of course, I am delighted that despite the geographic distance there is such a patriotic atmosphere prevailing in this country.

Meeting Armenian communities during my foreign visits has become a good tradition and an essential element of our foreign agenda. This meeting gives us a good opportunity to revalue the past and the present of the Armenian-Argentine friendly relations and to find new ways of stimulating that cooperation.

Throughout all historical periods the Armenian-Argentine relations have always been warm and friendly. Indeed, Argentina has provided an invaluable input into this friendship. Living and working in Argentina for decades, you have become the inseparable part of this beautiful country’s society and have made a major contribution to the development of Argentina. We should be proud of the fact that today Argentine Armenians are distinguished by their coherency and wide recognition among the society.

Although you are far from Armenia geographically, we have always felt your presence in our homeland. Both in the difficult years of the earthquake and the war you buttressed us and backed the development of Armenia. However, I would like to emphasize that you have supported your fatherland first of all by being an Armenian and have built a natural bridge between your two native countries using your knowledge and ideas.

Fortunately, the wheel of history keeps on turning in our favor. However, it is not just about luck. By restoring their statehood, the Armenian people managed to gain a foothold in order to rotate that wheel on their own.

We, the Armenians, have ceased to be mere bystanders to the progress of that wheel; rather than we have become one of its driving forces. We have made every success possible owing to our collective efforts and determination. Failure to succeed was first of all the result of our own faults.

The idea of statehood is reflected in the inflexible will-power of the Armenian people to be the arbiter of their own destiny and to confidently assume the historical responsibility. Everyone should clearly understand that the Republic of Armenia is the most critical test for our people’s political maturity. We do not expect anybody’s kindness, but at the same time, we are ready to be an equal and reliable partner seeking mutually beneficial cooperation with all interested countries.

After the restoration of Armenia’s independence, the Armenian-Argentine historical relations anchored in mutual trust and reciprocal respect have taken a new shape. Since then, we have conducted an active political dialogue which is marked by high-level reciprocal visits. We have broadened our cooperation agenda and have promoted effective cooperation in various international formats. My official visit to Argentina is another testimony to the mutual desire to ensure the continual development of these relations.

When Argentine President Carlos Menem visited Armenia in 1998, in his speech he stressed the special role of the Armenian community in Argentina’s life which was a gratifying and unforgettable moment to be proud of being an Armenian.

The Armenian-Argentine friendship is a long-lasting one since it is based on the shared values of the Argentine and Armenian peoples. The striking illustration of my words is the recognition and condemnation of the Armenian Genocide by Argentina which acquired strength of law in 2006.

Indeed, you have made a major contribution to this issue. Owing to your efforts, an Armenian Genocide museum is to be founded in Argentina. I would like to congratulate us all on this, if you do not mind, pleasant occasion and of course, and present my appreciation to all those who spared no efforts at making this important project a reality.

Armenia will commemorate the 100th anniversary of the Armenian Genocide on April 24 next year. April 24 is indeed a symbolic day; it is clear that the genocide did not start and finish in one day. Furthermore, it is not over as long as Turkish authorities continue to deny the reality.

However, I am sure that the day is not far when Turkey will eventually face its own history. By that, Turkish leaders will free their people from the heavy burden which they are forced to bear for already one centenary. I think that the growing civil consciousness in the person of Turkey’s young and educated generation which already prefer apology to shameful denial will greatly stimulate that process.

Yes, thousands of Turks deny the official policy of denial and express their solidarity with the Armenian people. These developments are obvious and they make the Turkish authorities take certain steps.

At present, the Turkish leadership is even talking about creating a “fair memory” among Armenians and Turks. However, with its very next step it tries to mine the justice equalizing the one and a half million innocent civil victims – mainly old men, women and children – with the Turkish soldiers killed during World War I as a result of the adventurism of the Ottoman Empire’s criminal leaders.

It is not a “fair” memory. We can’t accept such justice. In fact, it is a renovated, more cultivated and a repacked version of the denial of the Armenian genocide.

We will continue our joint efforts at ensuring the international recognition and condemnation of the Armenian Genocide. However, we should respect the memory of our ancestors not only by bringing this fight to its end, but also by buttressing our Homeland and making the most of each Armenian's talent and opportunities to the glory of the Homeland.

Everyone should be proud that ahead of the Armenian Genocide centenary we stand erect, with open forehead and enjoy the existence of the two Armenian independent states – the Republic of Armenia and the Nagorno-Karabakh Republic. Even under the conditions of the forced blockade and the “not war-not peace” situation the Armenian homeland continues developing.

As you know, today Armenians of Syria continue to live in difficult situation. Presently, this is our major concern. We are doing our best and will continue our efforts at providing respectable existence for them.

I am confident that the geographic distance is not an obstacle for you and the sufferings of our Armenian brothers and sisters of Syria find a response in your hearts. I am sure that be it in the whole world or in Argentina the heart of each Armenian feels pain for sufferings and tears of every Armenian.

The Syrian crisis proved once more what we all know: Armenia and the Diaspora make each other stronger. Having the support of the Diaspora, we feel mightier in Armenia. I am confident that you feel the same for Armenia’s presence, for the existence of your free and independent Armenia. Thus, I urge you to be more actively engaged in dealing with national issues. We are zealous in reinforcing ties with the Diaspora.

Our goal is that young men remain Armenians and speak Armenian. I am glad that the 2010-2012 Assistance Project on Dealing with the Educational and Cultural Problems of the Armenian Communities of the South American Region was of certain help and fostered reciprocal visits. Such projects inspire youth and give them an opportunity to establish contacts with their homeland. We will continue stimulating homeland recognition projects which leave an indelible imprint on the hearts of young men.

The Homeland-Diaspora collaboration is one of our most important strategic directions. Today, our state offers Diaspora Armenians to collaborate, is ready to afford them an opportunity for making investments and sets up mechanisms for Diaspora Armenians to promote beneficial activities in the Homeland. Our objective is to make a transition from charitable activities to mutually beneficial partnership.

I have said it before and I will say it again: come Armenians, make investments. By receiving a profit, build the country of our dream at the same time. By creating jobs, help us prevent the emigration which we all are so concerned about. It is an old saying: “A tree is a tree thanks to its roots and a house is a house thanks to its foundation.” An Armenian is stronger and happier in his own land and a country is mighty and invincible thanks to its children.

In this context, I would like to attach a great value to the role of the eminent businessman and benefactor Eduardo Eurnekian in Armenia’s progress. Born in the remote country of Argentina, he is endowed with the spirit of a real Armenian. Achieving a great success with his diligence and devotion, he has won recognition not only for himself, but also for the Armenian people. The image of this businessman and benefactor should inspire our compatriots from all over the world, especially young men.

With what are we, the Armenians, linked being in the other side of seas and oceans? Of course, with Armenia. We are linked together with our history, our common historical homeland and our losses. But most of all, we are linked not with what we lost, but with what we have not lost and have found – today’s Armenia. Thus, let us show a hundred times greater love, care and caress to Armenia which we have managed to save at the highest expense. Come to Armenia in order to retake possession of it since it belongs to you and your children as well. We are linked together with all future victories and with all successes we are going achieve in future. Let us build that future together as soon as possible.

Is there a safer place in this instable and dangerous world to recharge our Armenian spirit? I have serious doubts. I am saying to all Diaspora Armenians: come to Armenia or connect to Armenia with strong ties if you want to remain Armenians politically. Is there a place in the world where the Armenian language is not retreating? Yes, there is such a place and that place is Armenia. Today’s Armenia is the immortal pool of the Armenian language. Hence, come to Armenia or come to Armenia more often in order to be baptized once again and to baptize your children once more in that pool.

People tell a thousand and one stories about Armenia abroad: partly right and partly exaggerated, partly good and partly bad. However, it is better to see once than to hear about it a hundred times. Get your own impression and have your own idea about your real and mythical homeland. Be sure that the real Armenia together with Artsakh is more beautiful and native than you can imagine.

If you can’t live in Armenia you can live by Armenia. You can live by its successes, be proud of its achievements and share its pain and burden. One Diaspora Armenian was concerned about an expression heard in Yerevan: an “Armenia-centered policy.” He considered this as a danger of underestimating and neglecting the Diaspora organizations.

Be sure that the “Armenia-centered policy” has nothing to do with underestimating, neglecting and subordinating the Diaspora organizations. This is out of the question. The “Armenia-centered policy means a state policy. The internal and external policy implemented by the Armenian state where the Diaspora organizations – from scouts to political parties and spiritual centers – have their invaluable and irreplaceable role.

Our main destination and the target center of all our activities are our homeland – the real Armenia. I have come to tell you that you are the part of that real and crystallized Republic of Armenia.

You as well as we are Armenia, the homeland of us all, dear compatriots, dear Argentine Armenians.

To sum up, the guarantee of preserving our national identity and development is Armenia.

It is indeed a great honor to be a citizen of Argentina while to be an Armenian is happiness. It is your fortune to interlace those two.

Thank you all for your attention and of course, for your warm reception.